“The (gross) truth,” she captioned the clip.
Courteney Cox just gave fans a behind-the-scenes look at her “Friends” turkey Thanksgiving stunt — and it’s definitely worth the Gellar cup.
Just a few weeks after the “Friend… 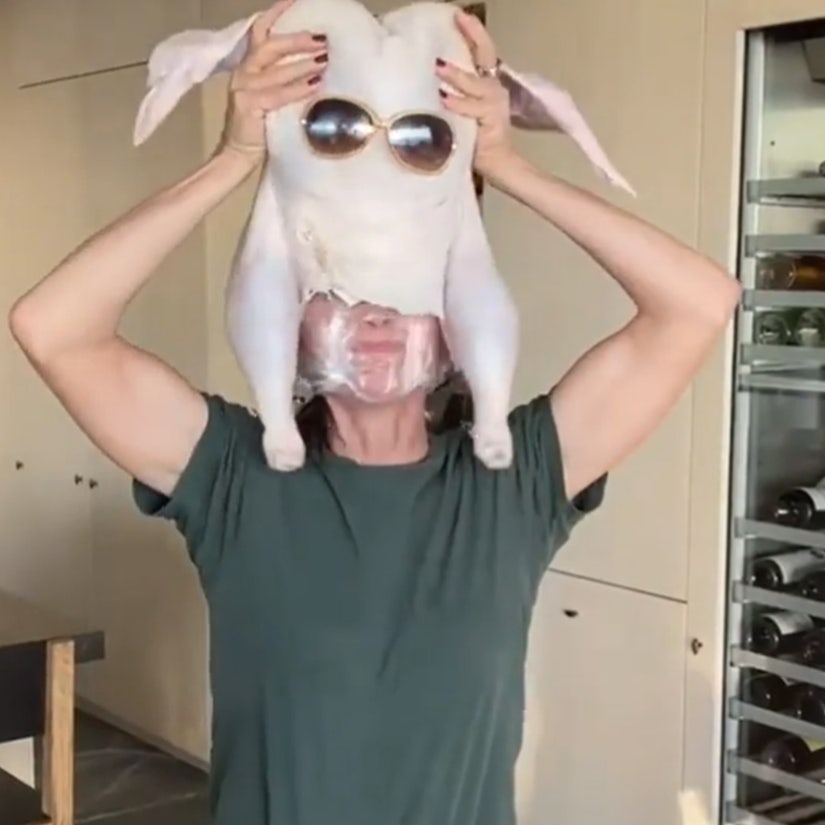 "The (gross) truth," she captioned the clip.

Courteney Cox just gave fans a behind-the-scenes look at her "Friends" turkey Thanksgiving stunt -- and it's definitely worth the Gellar cup.

Just a few weeks after the "Friends" alum reenacted one of the show's most iconic holiday moments -- in which her character, Monica Gellar, dances with a real turkey on her head -- Cox shared a fun clip on Sunday explaining how she pulled off the epic recreation.

In the video, which began by showing a disclaimer that read, "Vegan discretion advised," Cox can be seen getting a little help from some friends as they make several attempts to get the sunglasses-wearing turkey to stay on the "Scream" actress' head -- and the results were hilarious.

As shown in the clip, under the turkey, Cox appeared to have some sort of plastic wrap on her face, with a towel layered on top of it. While she seemed to be protected by the dead bird's goop, it didn't appear to make the task of balancing the turkey on her head any easier -- or less "gross."

"It's really f--king gross," she said at one point, adding at another moment, "That bone hurts!"

During another point in the video, Cox asked a friend off-camera, "It's so disgusting. What's not right about it?" to which her pal quipped in reply, "Everything!"

During the last attempt, which fortunately appeared to be successful, Cox took the turkey off her head as she said, "I can't breathe," before asking, "Alright, who's got the behind-the-scenes footage?"

READ:  J. Lo’s Blue Leggings Inspired Us to Find Our Own — And Start Working Out

And if the video couldn't be any more awesome, Bruno Mars' song "Uptown Funk" played in the background throughout the entire clip -- and it was truly the icing on the cake. If you don't believe us, just watch ... the video above!

This came just a few weeks after Cox gave fans a Thanksgiving treat by recreating the turkey-head moment, which first went down in the "Friends" flashback-filled episode from Season 5, "The One With All The Thanksgivings," in 1998.

"Happy Thanksgiving everyone, I hope you're having a great day," Cox shared in the clip. "I'm feeling so thankful and also, if I get one more goddamn gif with that turkey on my head, dancing like a f--king fool, I'm just gonna snap!"

"Anyway, since I'm the symbol of Thanksgiving, here you go, hope it makes you happy," she added, before the camera cut and she popped back up with another turkey on her head -- sunglasses, shoulder shimmy and all. As she danced, the "Friends" theme song, "I'll Be There For You," played in the background.

"You DID THAT!!" Cox's "Friends" co-star Lisa Kudrow wrote in the comments.