Country singer and actress Jana Kramer is making her split from ex-husband Mike Caussin official by having her wedding tattoos removed.Posting to her Instagram Stories, Kramer, 38, shared a video before and during the process.”I’m about to go get my ta…

Country singer and actress Jana Kramer is making her split from ex-husband Mike Caussin official by having her wedding tattoos removed.

Posting to her Instagram Stories, Kramer, 38, shared a video before and during the process.

"I'm about to go get my tattoos removed," the One Tree Hill star shared. "This one's, like, almost completely gone. And I got my anniversary date on my arm, which is getting removed." Watch the full video above.

READ MORE: Sinead O'Connor hospitalised days after teenage son's death: 'I am lost without my kid' 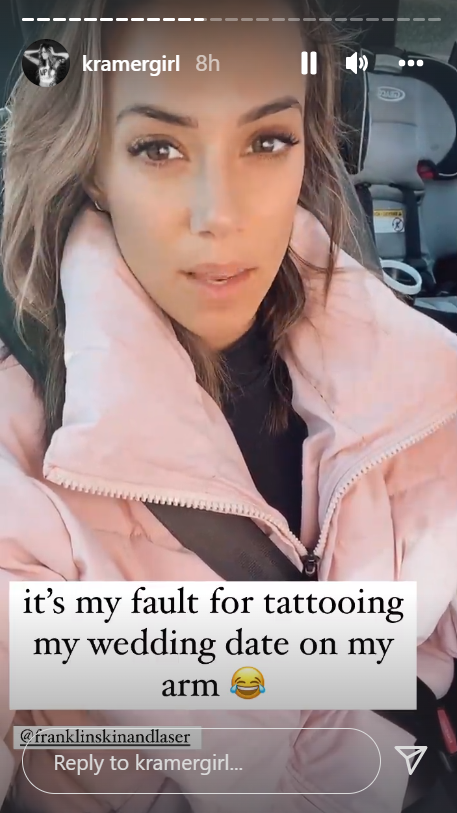 Kramer told her followers she loved the laser clinic she attends, despite the pain, adding, "I caused that pain on myself, by getting my wedding date tattooed on my arm."

She filmed herself in the laser chair during the removal, wearing safety glasses and holding her arm out as a beautician used a laser removal machine to get rid of the tattoo.

Joking about the glamour of the procedure, she wrote, "You know you want these glasses" in the video text.

Kramer announced she was splitting from her footballer husband in April last year, sharing an emotional post to Instagram.

"It's time," the post read. "As I try to make sense of a reality I never wanted to believe could be possible again, those words have now become a reality.

"I've fought y'all. I've loved hard. I've forgiven. I've put the work in. I've given everything I have, and now I have nothing else to give.

According to a People source, their split came after Caussin allegedly cheated on Kramer "again." The source told the publication, "He cheated and broke her trust again. After fighting for the marriage for so long, she's come to terms with the realisation that his patterns were never going to change."

The couple wed in 2015 but split a year later when Caussin allegedly cheated on Kramer. He subsequently entered treatment for sex addiction and they renewed their marriage vows in 2017.