Although WandaVision seems to finally be explaining the show’s increasingly creepy events, there are still a lot of theories about what’s going on and who’s really in charge. One theory suggests that Nightmare, a supervillain from the Marvel comics, i… 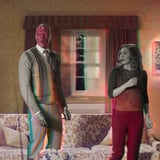 Although WandaVision seems to finally be explaining the show's increasingly creepy events, there are still a lot of theories about what's going on and who's really in charge. One theory suggests that Nightmare, a supervillain from the Marvel comics, is actually pulling the strings. Could that really be the case? Given what we know about his powers in the comics, it's definitely a possibility.

In the comics, Nightmare is a powerful demon who rules over the Nightmare World, a horrifying part of the "Dream Dimension." He's able to feed off of psychic energy and trap people, even powerful superheroes, within conjured versions of their worst nightmares. Most frequently, he's an adversary of Doctor Strange, but he's also faced off against plenty of other heroes along the way. His dream-reality powers certainly would make him a candidate to be the ultimate power behind the Westview Hex, since it appears to be a manifestation of Wanda's dreams that's slowly turning into a nightmare.

The idea of bringing Nightmare into the onscreen Marvel universe has been floated around before. In fact, it goes all the way back to 2016, when Doctor Strange director Scott Derrickson told IGN that he'd wanted Nightmare to be the villain of the first movie.

"I really like the character of Nightmare and the concept that the Nightmare Realm is a dimension . . . We decided not to do that [in the first movie] because that's a bit of a complex idea to try to introduce everything we do introduce and introduce the idea of nightmares themselves as being a dimension. I hope somewhere down the line we do get to explore that because I think that's super cool concept."

It's all but certain that the concept of the multiverse, first touched on in Doctor Strange and hinted at in Spider-Man: Far from Home, will become a full-fledged part of the Marvel universe with Doctor Strange in the Multiverse of Madness. With Wanda set to play a major (though still secretive) part in that upcoming movie, it makes total sense that WandaVision would start introducing some of the concepts and characters that will lead into that movie and the ongoing story of the multiverse.