“It’s kind of just unfortunate when larger companies ‘borrow’ from smaller designers,” the 22-year-old designer says in the now viral TikTok.
Converse has denied stealing two designs sent to them by a 22-year-old applying for an … 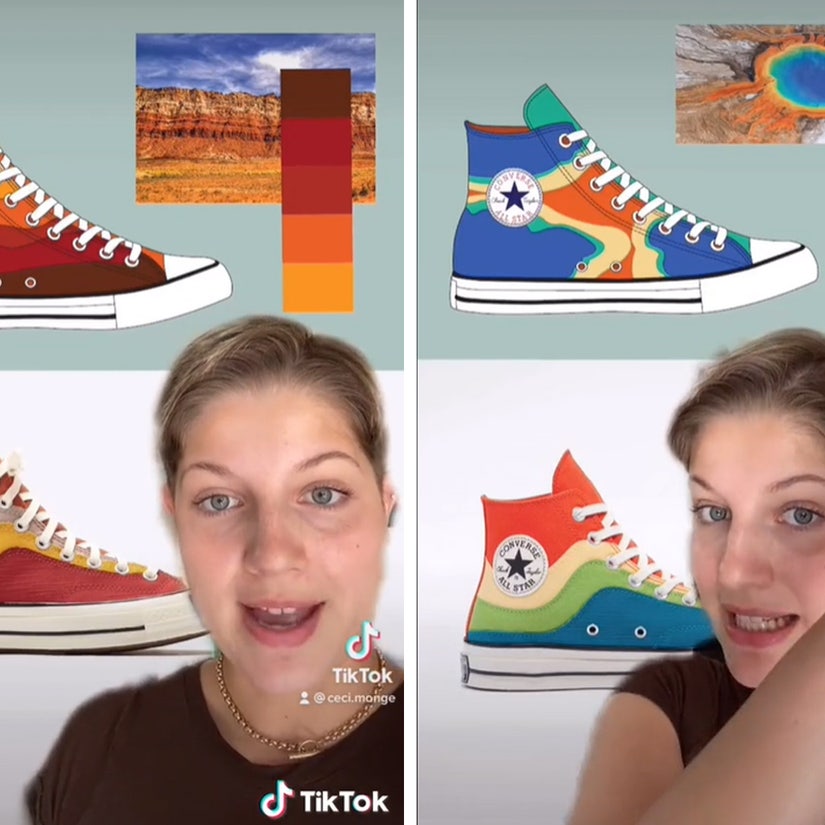 "It's kind of just unfortunate when larger companies 'borrow' from smaller designers," the 22-year-old designer says in the now viral TikTok.

Converse has denied stealing two designs sent to them by a 22-year-old applying for an internship.

In a viral TikTok with now more than 10million views, Cecilia Monge showed two shoes she created based on natural landmarks in the US... which she claims bear striking similarities to two the company recently released.

"So, I was watching that TikTok and I was struck, because two years ago I applied to a design internship with Converse, and I got really excited about it, I really wanted the internship," she explains in the video.

"So I went above and beyond and kind of made a pitch slide-deck within my portfolio that I sent them for the application... and this is what I designed."

The first she called "The Grand Canyon", layers the browns, reds and oranges found in the façade of the Arizona cliff faces. Not only does Monge believe the official product looks eerily similar, it's name — the "Converse Chuck 70 National Parks" — raised eyebrows too.

"Um, it is essentially the same," Monge claimed. "Didn't get the internship, never heard back from them. And then saw this on the internet."

Her second design was called "Yellowstone", was clearly based on the stunning colors of the Grand Prismatic Spring... stunning colors that seemed similar to the ones on the Unisex Converse Chuck 70 National Parks High Top Bright Poppy.

"This is the second shoe that they released, and I think it's also very interesting because I think the color palette is exactly the same as the one I sent them, down to the order of the colors, and the actual hues of the colors," she says in the video. "Like, look at the yellows and the greens... it is the same color."

"Um... but yeah. I don't think it's a coincidence. And it's kind of just unfortunate when larger companies 'borrow' from smaller designers."

On the Converse website, the shoe series boasts they are "Inspired by vistas of national parks."

In a follow up TikTok, Monge showed yet another similar Converse on sale — as well as the apparent receipts showing the November 2019 timestamp on her creations:

But according to the company, the designs are their own.

"In November 2019, the candidate did apply to a Converse internship for 2020 summer program – a highly competitive program, which receives thousands of applications each year. She was not hired or screened for any roles," it told Daily Mail in a statement.

"The application did not include a request for, nor did Converse solicit design portfolios/samples to be submitted. As a matter of standard legal policy, we do not share unsolicited portfolios of job applicants across the business."

"In October 2020, we released a Chuck 70 design, which took inspiration from the map patterns of Nor'easter storms. It was first concepted and designed in April 2019. Due to the popularity of the style, we continued it in 2021 under our design concept 'Hybrid World', which explores original design concepts informed by the physical and digital realities of modern lives. The Great Outdoors and specifically, National Parks served as inspiration for various color palettes, which were applied across a number of executions across the Chuck 70, Chuck Taylor All Star and Apparel."

Monge said she reached out to the company after noticing the similarities, but never heard back — which is why she turned to TikTok.

"Their TikTok account's bio even says 'Here to collab' which I think is ironic," she told fashion watchdog Diet Prada.

"I'm hoping for more people to care about large companies stepping on the little guy, and to learn more about how often large companies are powered by the creativity of people they didn't even give the time of day."