All of Bachelor Nation has been waiting for this episode, the moment of truth for Clare Crawley’s season of The Bachelorette – we just didn’t expect everything else that came along with it. The episode began with the conversation between Chris Harriso… 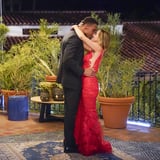 All of Bachelor Nation has been waiting for this episode, the moment of truth for Clare Crawley's season of The Bachelorette - we just didn't expect everything else that came along with it. The episode began with the conversation between Chris Harrison and Clare that has been teased since the season began, where the host tells the hairstylist that she just "blew up The Bachelorette."

The metaphorical detonation was Clare admitting that Dale Moss was the only man she's interested in and that she's been falling in love with him since the beginning, which we've known since she gave him that first impression rose. While Clare swore to Chris that she had no contact with Dale before the show began, she explained that she had ample time to get to know the former NFL player through his social media during the show's delay due to COVID-19. Meeting him solidified her feelings and, as Chris and production have obviously noticed, made it impossible for her to give the other men in the house a fair shot. To give Clare the chance to tell Dale her feelings, the two have a private date as Chris breaks the news to the other men that they will be having no group date or rose ceremony - which leaves them to stew in their anxiety as Clare and Dale go on their date.

It's the first time viewers have seen the pair have an actual conversation together, which is most likely the fault of editing, though, they definitely haven't had lengthy discussions before, and it's clear that Clare is really into Dale. Dale is a bit harder to read, but he says all the right things and, at the end of their night, tells Clare that he's fallen in love with her as well.

Related:
The Bachelorette: Our Best Guess For When Tayshia Adams Will Make Her Grand Entrance
READ:  Watch the moment Will Smith slaps and lashes out at Oscars presenter Chris Rock over Jada Pinkett Smith joke

Chris visits Clare the afternoon after her overnight date with Dale, and when she tells him that Dale feels the same way she does, he reminds her that this means she has to break up with her remaining suitors. The other men already have a pretty good clue at what's coming their way, though a few naively believe Clare wouldn't have an overnight date with Dale so early in the game as if she didn't forget them for almost an hour during the last group date. Clare breaks the news to the men, who are upset about their wasted time, and while she says she "apologizes for wasting your time," she refuses to apologize for falling in love with Dale.

For some reason, Chris and Clare decide that the next step for the brand new couple is to get engaged, which seems way too quick even for this love story. Everyone questions whether Dale is even ready to propose to Clare, seeing as how they've only known one another for what, cumulatively, is probably a handful of hours. But when Dale walks toward Clare for her final rose, he does so with a Neil Lane diamond ring, asking the older woman to be his wife!

We don't see the happy couple after their engagement happens, which Chris later explains to the other suitors is because they've already headed out, ready to start their new life together. So, after all that drama, we can only say cheers to the future Mr. and Mrs. Moss!