During the “Selling Sunset” reunion released by Netflix on Friday, May 6, Chrishell Stause dropped some major news about her relationship status. After host Tan France asked if she was seeing anyone special lately, Stause said, “I recently have been s… 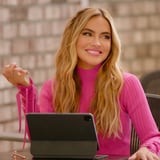 During the "Selling Sunset" reunion released by Netflix on Friday, May 6, Chrishell Stause dropped some major news about her relationship status. After host Tan France asked if she was seeing anyone special lately, Stause said, "I recently have been spending a lot of time with someone that's very important to me. Their name is G Flip. They're nonbinary, so they go by they/them." She added, "And they are an extremely talented musician."

"I'm so happy, so if that angers someone, that's not really my problem."

The couple met through work, with Stause starring in G Flip's music video for their song "Get Me Outta Here," about a "chaotic love story." She said, "I come from soaps. I love acting. And with the job that we have, I don't always get to do it. At first of course I was like, 'Yes, let's do that.'" Of the making of the video, Stause explained, "It was so much fun. We had such a blast. Not everyone's going to be ready for it, but I think it's great. I think it's amazing, the song is amazing." She also shared footage of the video, which includes shots of the couple kissing.

Fans had noticed that G Flip and Stause had been major presences in each other's Instagrams and social media comments for weeks. They were also spotted together on May 1 in Denver, where G Flip was performing. Stause didn't, however, share when the relationship began.

In the reunion, it seemed that most of the "Selling Sunset" cast didn't know about the relationship. Mary Fitzgerald said she "noticed" they were spending time together, but had not asked Stause to clarify. Maya Vander said she did not know at all.

READ:  Sex And The City Stars Finally React To THAT Shock Ending

About her sexuality, Stause said, "Nothing's really changed for me. I'm still very attracted to very masculine energy and a good human . . . I hear people talk about these things and they're like, 'I knew from a young age.' That's not me. I'm just, I'm very open to good energy. I don't know what my future holds. But it is a complicated issue to talk about. Even now I'm nervous."

Stause continued: "I know being in this position, we get judged constantly. But at the end of the day, I'm so happy, so if that angers someone, that's not really my problem."

Season five of "Selling Sunset" focused a lot of its time on Stause's relationship with her boss Jason Oppenheim. They announced their breakup in December 2021. During the reunion, Oppenheim got emotional talking about their split and teared up. "There's a lot of sadness and loss," he said. "I think watching the show made it more difficult. You know, brought it back up. It's been a few months, but I'm still going through stuff. I think there was a lot of love between us, and still is, and I still care about her very much. This has been a very difficult breakup."

Stause said that she "took the pressure" off herself when it comes to starting a family and that she's focused on "enjoying." Stause also admitted G Flip is in "a different place in their life."