In our Q&A series POPSUGAR Crush, we get to know some of our favorite celebs’ more intimate details – from their first celebrity crush to the best love advice they’ve ever received. This month, we’re crushing on As We See It star Chris Pang.
Chri… 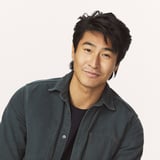 In our Q&A series POPSUGAR Crush, we get to know some of our favorite celebs' more intimate details - from their first celebrity crush to the best love advice they've ever received. This month, we're crushing on As We See It star Chris Pang.

Chris Pang is starring on Prime Video's As We See It as the slightly unlikeable character Van - something that's a strong departure from the actor himself. In the series, Van plays the older brother of Violet (Sue Ann Pien) who's struggling to balance his personal life and protecting his sister, who is on the autism spectrum.

POPSUGAR caught up with Pang to discuss what drew him to the project, as well as the things that make him lovable in real life. "I think it always feels good to be a part of a project that is meaningful. This is not just entertainment, but this is a really heartfelt project that teaches people things by exploring the world of autism and trying to discover what it means to navigate life on the spectrum," he says, adding that showrunner Jason Katim's writing was "on another level."

"This is not just entertainment, but this is a really heartfelt project that teaches people things by exploring the world of autism."

Violet requires a lot of compassion and guidance, but Van often falls short. "What I've learned with him is sometimes it doesn't matter what your intention is, it's the way that you go about it. And so throughout the series, that's his journey. He learns what his sister really needs, what she really wants, how to care for her better. And by the end of the series, he's opened himself up a little bit more," he shares.

As for the Australian actor's personal approach to life, he's caring when it comes to romance - but not quite the smooth-talker you know him as from movies like Crazy Rich Asians, Charlie's Angels, and The Mule. Check out the rest of Pang's POPSUGAR Crush interview ahead, and be sure to check out As We See It on Prime Video on Jan. 21.

Related:
As We See It Centers the Autistic Person's Experience Authentically

Who was your first celebrity crush?

I think it was Kristin Kreuk from Smallville . . . My cheeks are already red.

What is your favorite pickup line?

I think I pride myself on not having one. That's the whole thing. I think they're so corny.

What is your favorite flirtatious emoji to send?

Look, I don't know if I'm the best at flirting. I don't really use emoji. I think one of my favorite ones right now is the bellissimo, you know the hand? It's like the Italian - you know when Italian people speak and they use their hands - that emoji. It's like perfecto.

What is your favorite form of self-care?

Allowing myself time to play Xbox and not feeling bad. You just have to veg out sometimes. . . That is self-care. That's an important part of my life.

What is your favorite workout move?

I would've said bench, because I feel like, "Oh yeah, I'm working on my chest. That's an important muscle." That's the aesthetic kind of movement. But when you say, "What's your favorite move?" Now, I feel like, "Oh, it's one of those, I don't know, big, cool-looking ones where you pull on cables and stuff." I don't know. It'd be one of those.

Do you prefer dogs or cats?

What is your biggest turn-on?

A lot of it is how well I get along with the person, that's a turn-on. When I can have a conversation and you just vibe and you're on the same wavelength, I love that. Then I'm having fun.

What is your biggest turnoff?

I would immediately stop talking to you if you vomited on yourself. I don't know. That's a pretty big turn off. . . [and] arrogance.

What would your dating profile say about you?

You want to put your best foot forward, but you don't want to sound really cocky. You don't want to be like, "Well, I'm an actor." That's just so corny. I probably wouldn't say anything about acting at all in my profile. It'd just be like, "Hey, [I'm] Chris from Australia, I have an Australian accent, please don't ask me to say throw it on the Barbie."

What is your ideal first date?

I used to think that seeing a movie was a good idea, but then I realized you're just sitting next to each other in silence not doing anything for two hours, which is probably the worst thing you could do on a date. . . A date for me should be exciting. I don't want to just go to dinner even though going to dinner is really nice to get to know someone. I want to do an activity. But then it's risky because what if they don't like it. What if you go rock climbing and then the person is deathly afraid of heights or something?

What is your go-to movie?

READ:  14 Women Harry Styles Might Have Dated at Some Point

What is your most memorable fan encounter?

I was in Barcelona recently and that was a place where I thought I could exist without anyone knowing who I was. I just wanted a day of doing touristy things. And so I was sitting at La Rambla, the most touristy part of Barcelona, in the most touristy restaurant, doing touristy things, getting ripped off by this street vendor. The whole time this girl was staring at me. . . And I'm just like, "Is there something on my shirt? What is this?" And then she came over and it was the cutest interaction because she's like, "Hi, I wanted to come over the whole time. I didn't know whether I should have, and I'm a big fan from South America," and it just stood out to me because it was just so many dots that had to be connected for that to happen. . . I didn't even know people watched movies that I was in, in South America and liked what I did. And then we ended up in Barcelona. That's the one that sticks out in my mind. And I was like, "Oh, that was cool." And she was really lovely.

Where is your favorite place to travel?

Budapest is one of my favorite cities. It's just so beautiful. A lot of people don't know that the reason it's called Budapest is because there is the Buda side and then there is the Pest side and they're on opposite sides of the river. And they're connected by a bunch of bridges, which it's just so spectacular to look at. I love being there [and] the architecture is amazing.

What is your favorite thing to cook?

So the thing you got to know about me is I don't like food. Is that really disappointing? Is that weird? I just eat because I have to. And so the idea of a good meal for me is something that has the right amount of calories, protein, and sustenance that I need to survive, and that is the easiest to consume. So I rate my food based on how scoffable it is. If I can scoff this easily, then it's a good meal.

What is the most romantic thing you've ever done for someone else?

Look, I'm pretty lazy to be honest, as you can probably get by now. I just like sitting on my couch playing Xbox and then eating the most convenient thing . . . It sounds like I'm just saying I'm really selfish, but for me to get off my ass and do something is a big deal. And so I think for Valentine's Day last year I organized a trip, and then organized a whole day of activities, went to a carnival thing. I did the whole thing. I organized it down to me writing out a timetable of what we going to do for the whole day. And I thought that was really romantic.

I had the best intentions, [but] I didn't realize that my girlfriend won't go on rides. She's actually deathly scared of going on rollercoaster rides that are labeled "big boy rides." She can only go on the kiddie ones. And I thought she was joking because were looking at the merry-go-round and she's like, "Let's go on that." And I'm like, "No, we're not eight. We're going on that thing that goes upside down." And she's like, "I'm probably going to throw up." And I'm like, "Ha, ha, ha." And then fast forward, 20 minutes later, she's actually throwing up. . . So that's what I get for trying to be romantic. It's the last time I tried to plan something a whole day.

What is the best gift you've ever received?

I really like thoughtful gifts. I remember when I was younger, I always looked at girlfriends and boyfriends giving each other these handmade gifts that they'd spent a lot of effort making. And I didn't have a girlfriend until quite late. And I remember telling all my friends, I'm like, "Man, what does it feel like to get a book of memories? That must be just like the loveliest thing to get. That's so special. And I've never gotten anything like that." And one year my friend made me one. She spent hours putting together this scrapbook of all the memories of our whole friendship group and I thought that was the sweetest thing.

What is the best gift you've ever given?

I promise you, I give good gifts. I just can't think of them right now. Me and my brother are the biggest Transformers fans - that was our whole childhood. We loved the Transformers movie [and] this animated cartoon and we literally had dreams about having the toys of these Transformers. And now as an adult, I realized they had released this special edition of one of the toys we had in there. It was giant and epic. I'd moved to America by then, but I bought it and packaged it and sent it back to him to relive our childhood. I thought that was pretty nice. He really liked it.