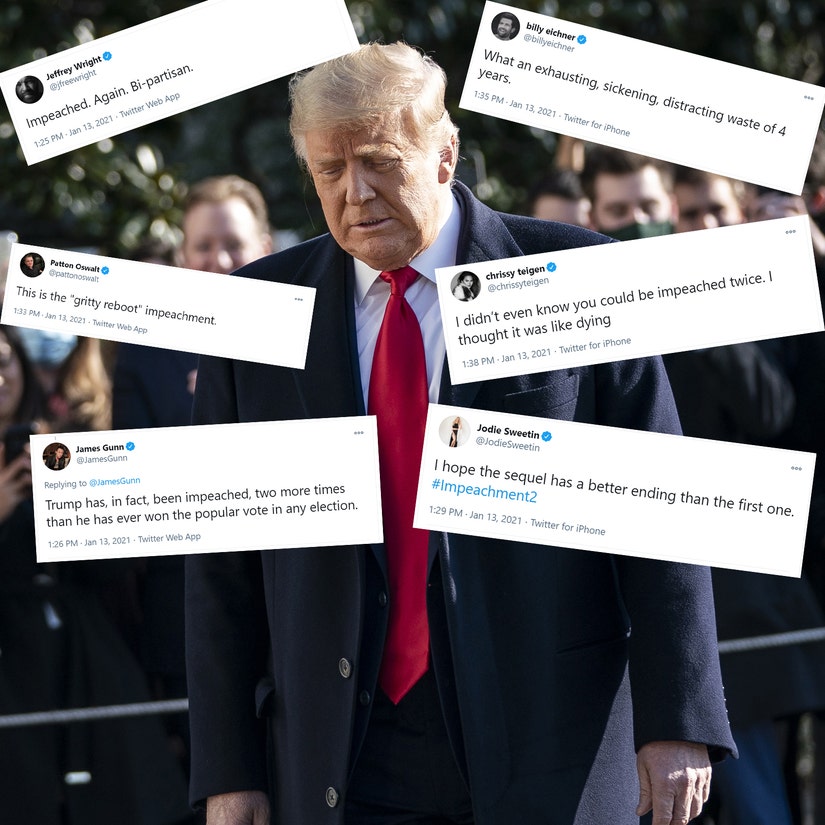 It's official: Donald Trump is the greatest President in US history.... at getting impeached.

On Wednesday, the House of Representatives voted 232-197 in favor — including ten Republicans — making him the first ever POTUS to be impeached twice.

Reaction among celebrity Twitter was as swift as it was brutal.

Even Geraldo Rivera Has Turned on Donald Trump

I didn’t even know you could be impeached twice. I thought it was like dying

This is the "gritty reboot" impeachment.

When one impeachment won't suffice,
Damn his new crimes- impeach him twice!#DarnOldDonald pic.twitter.com/LVDfyAopai

The importance of 10 GOP House members voting to impeach is this: It shows that it’s not about politics, it’s about courage. The truth is there, for those with guts enough to say it and mean it. To the ten with those guts, your country salutes you.

What an exhausting, sickening, distracting waste of 4 years.

Happy Birthday @OfficialJLD! I hope you like the gift I got you from the House. ❤️🍸 2X

Fuck it. Let’s go for three.

Congrats to Trump on finally getting more votes than a Clinton

I hope the sequel has a better ending than the first one. #Impeachment2

Mood when the President is being impeached AGAIN: pic.twitter.com/GMdylpbv7d

Trump has, in fact, been impeached, two more times than he has ever won the popular vote in any election.

Finally, the @gop begins to break the Mummy’s Curse https://t.co/hUDkrAM3CM

Thank you @RepSpeier, and all of your colleagues who likewise voted for accountability. It matters. Democracy is worth it. Our republic is worth it. https://t.co/WV8VPmih39

Donald J. Trump has finally made history. It only took 231 years and 275 days.

Donald Trump is the first President in the history of the United States to be impeached twice.

READ:  'Save the Last Dance' Cast: Where Are They Now?

Moments after Wednesday's vote, Senate majority leader Mitch McConnell rejected calls to summon Senators back to Washington early for the second impeachment trial, instead waiting until at their first regular meeting at the very earliest on January 19.

He claimed there was "simply no chance that a fair or serious trial" before the inauguration of Joe Biden on January 20.

"This is not a decision I am making; it is a fact," he said. "The President-Elect himself stated last week that his inauguration on January 20 is the 'quickest' path for any change in the occupant of the presidency."

Unlike the simple majority of the House, a two-thirds majority is needed in the Senate to convict Trump. This would require the support of several GOP Senators, many of whom have not ruled that out — including McConnell himself.