As a woman in film, there are few nominations as prestigious as Best Actress at the Oscars. And prior to this evening, Carey Mulligan had only been nominated once in the past, back in 2009 for her role in An Education. This year, Mulligan received a nomination once again thanks to her work in Promising Young Woman, and regardless of whether she wins or loses the award, Carey Mulligan’s Oscars look is a major win.

Oscar or not, Mulligan’s career is littered with success and awards. She’s the winner of one British Academy of Film Award, one Critics’ Choice Award, four Screen Actors Guild Awards, Two Golden Globe Awards and one Tony Award. No big deal! Mulligan has been doing her thing since the early 2000s, so she’s no stranger to the Hollywood grind. And of course, she knows how to work a red carpet when its’ time to celebrate.

At the 93rd annual Academy Awards, Mulligan hit the carpet in Valentino Couture looking absolutely ravishing. As per usual! Her orangey-gold gown was actually more of a bandeau top paired with a voluminous high-waisted skirt, decked out in dazzling sequins. As for glam, she sported a naturally bronzed makeup look that complimented her dress perfectly and wore her hair pulled back in a chic messy bun. 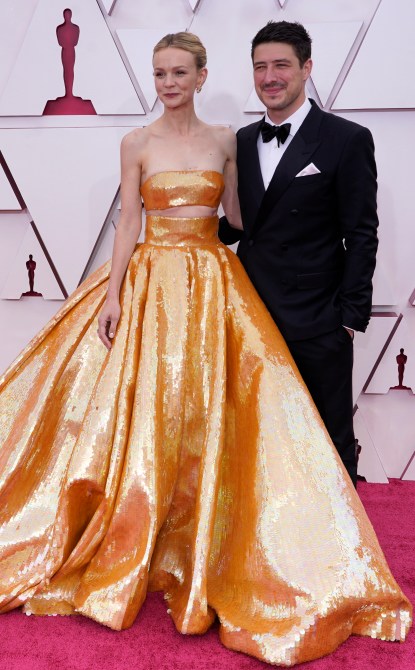 I wasn’t expecting Mulligan to show up in one of the best looks of the night (No shade!) but she definitely turned heads in this statement-making look. I live for the drama of the skirt! Given that most of this year’s award shows were a little, well, unorthodox, it was nice to see stars hitting a real, in-person red carpet and dressing up like in pre-pandemic days.

To ensure the show had some sense of normalcy, Oscars producers Steven Soderbergh, Stacey Sher and Jesse Collins actually required that all nominees attend. No Zooming in allowed! Everyone was tested beforehand and safety precautions were taken to ensure the intimate evening could still feel glamorous without turning into a super-spreader showdown. 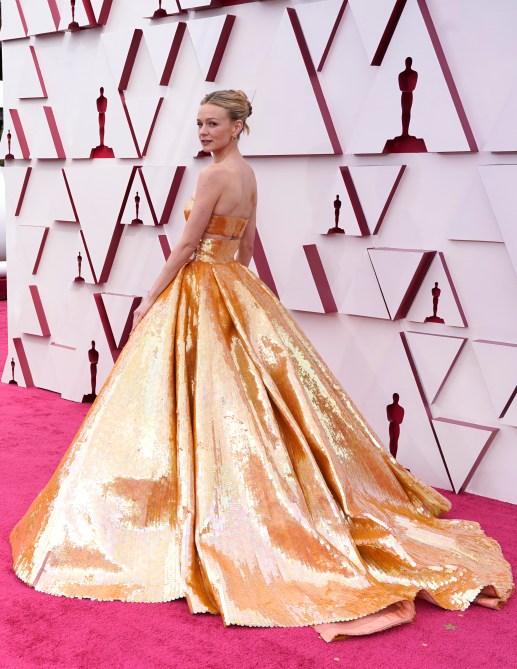 Mulligan’s nomination for Best Actress is just one of five nominations Promising Young Woman earned at this year’s ceremony, including Best Picture, Best Director, Best Original Screenplay and Best Film Editing. The plot followed Mulligan as a woman hell-bent on avenging the death of her best friend, who was tragically raped by their classmate years earlier.

In my opinion, it’s one of Mulligan’s best films to date—and one of her best Oscars red carpet looks, too. Prior to this year’s ensemble, my fave was from the 2010 Oscars, at which she wore a black Prada dress with a sweetheart neckline and edgy embroidered for the right balance of femme and cool-girl vibes. 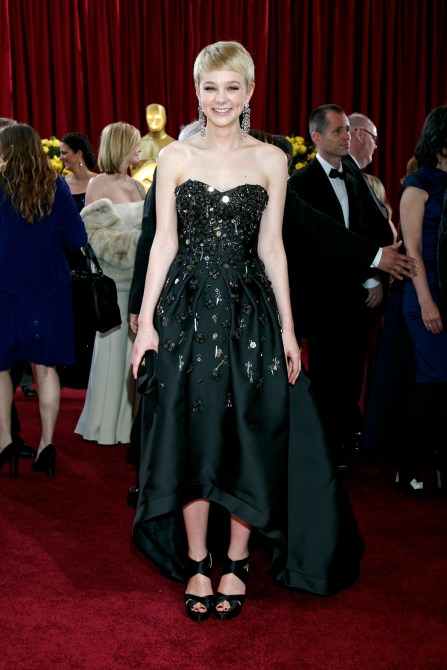 Still, I think it’s safe to say that this year’s sparkly look is my all-time favorite. We love a star whose style keeps getting better! Mulligan is certainly a post-pandemic fashionista to watch.