Image Source: Getty / John Paul Filo / CBS
On March 2, legendary actor James Earl Jones, 91, made history as the second Black actor to have a Broadway theater named in his honor. In celebration of Jones’s “lifetime of immense contributions to Broadway … 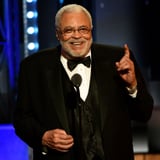 On March 2, legendary actor James Earl Jones, 91, made history as the second Black actor to have a Broadway theater named in his honor. In celebration of Jones's "lifetime of immense contributions to Broadway and the entire artistic community," the 110-year-old Cort Theatre - previously named for vaudeville performer John Cort - will be renamed The James Earl Jones Theater, according to The New York Times.

"The Shubert Organization is so incredibly honored to put James - an icon in the theatre community, the Black community, and the American community - forever in Broadway's lights," said Robert E. Wankel, CEO and board chair at Shubert. "That James deserves to have his name immortalized on Broadway is without question."

"It means a lot. It's too heavy for me to try to define."

Touched by the incredible gesture, Jones said, "For me standing in this very building 64 years ago at the start of my Broadway career, it would have been inconceivable that my name would be on the building today. Let my journey from then to now be an inspiration for all aspiring actors." In a phone interview with The New York Times, Jones added, "It means a lot. It's too heavy for me to try to define."

Renowned for his work on screen as the voice of Darth Vader in the Star Wars series, Jones is also known for his work as Mufasa in "The Lion King" (1994 and 2019) King Jaffe Joffer in "Coming to America," Terence Mann in "Field of Dreams," and dozens of additional roles. On stage, Jones has appeared in 21 Broadway productions, including his first stage performance in "Sunrise at Campobello" in 1958, "Othello," "Of Mice and Men," "Cat on a Hot Tin Roof," "Hamlet," "King Lear," and more. Most recently, the actor appeared on stage as Weller Martin in "The Gin Game" in 2016.

In 1969, Jones took home his first Tony Award for his role as Jack Jefferson in "The Great White Hope," followed by his second in 1987 for his role as Troy Maxon in "Fences." Technically an EGOT recipient, Jones has also received two Primetime Emmy Awards, a Grammy, a non-competitive Academy Award, and a Special Tony Award for lifetime achievement in the theatre.

News about the James Earl Jones theater comes after the Shubert Organization made a pledge to Black Theater United last summer to name a theater after a Black artist. The first Black artist to receive such an honor was August Wilson, whose name graced the Virginia Theater - previously known as the ANTA Theater in 1950 and the Guild Theater in 1925 - after his death in 2005. Over the course of the COVID-19 pandemic, the Cort Theatre, located on West 48th Street, has been undergoing an extensive $45 million renovation, including construction of a new, contemporary wing, and is expected to reopen in the summer of 2022.