On March 1st, Britney Spears shared a rare picture of her two sons on Instagram with a seriously reflective message. The singer posted the photo with a ca… 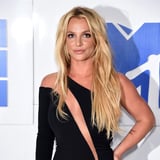 On March 1st, Britney Spears shared a rare picture of her two sons on Instagram with a seriously reflective message. The singer posted the photo with a caption that read "it's so crazy how time flies . . . My boys are so big now 👩‍👦‍👦 !!!! I know . . . I know . . . it's very hard for any mama especially a mama with boys seeing them grow up so fast !!!! Talk about enough to make you go to your knees . . . GEEZ!!!!"

She went on to share her gratitude before trying to reign it in at the risk of not sounding like a 'cool mom', though fans of course reassured her that that wasn't the case. She said "I'm extremely lucky because my two babies are such gentleman and so kind that I must have done something right 🙊 !!!! I haven't posted pictures of them for some time cause they're at the age where they want to express their own identities and I totally get it . . . But I went out of my way to make this cool edit 🌅 and guess what . . . They're finally letting me post it !!! Now I don't feel left out anymore 😂😂😂 and I'm gonna go celebrate . . . Oh sh*t I guess cool moms don't do that . . . Ok I'll just read a book instead 🤷🏼‍♀️📚🤣 !!!!"

Just in case her caption wasn't cute enough, the comments that flooded in after were even cuter. Spears's partner Sam Asghari commented "Lioness with her Cubs 😍", followed by her choreographer Brian Friedman whose comment read "Boys 2 Men". A number of Spears's fans also went on to let her know how happy they were to see her doing well, following the release of the Framing Britney Spears documentary that aired in February, and left viewers with some pretty shocking revelations.