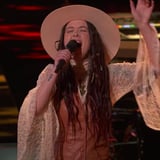 You can always count on Blake Shelton for a good laugh or two on The Voice. During the Battles on Monday night, Corey Ward and Savanna Woods went head-to-head as they performed a stunning rendition of Fleetwood Mac's "Dreams." While I was getting lost in their captivating vocals, Shelton clearly had other things on his mind. Following the performance, Shelton proved that he's hip with the kids as he asked his fellow coaches, "Is this the one where the guy's drinking the juice?" referencing a viral TikTok video. Kelsea Ballerini, who was filling in for Kelly Clarkson, followed up by teasing, "Look at you knowing what the kids are doing." All jokes aside, the performance clearly won the coaches over, as both contestants ended up getting saved. So grab a bottle of cranberry juice and watch the incredible cover above.