Bachelor Nation has lost another couple.

Since their split, Bachelor Nation has been wondering: Why did Riley and Maurissa break up after Bachelor in Paradise?

“My life has been full of letdowns and broken promises until I met you. You showed me what a real man is. You showed me literally everything I’ve dreamed of my whole life. You showed me that fairytales do exist, even though our fairy tale includes whipped cream and toes,” Maurissa told Riley during their Final Rose Ceremony. “I really never believed in love at first sight, and you showed me that it truly is possible. I knew I loved you the first night that I met you. You were adventurous, passionate. I knew that I was going to do whatever I needed to to make you mine, and today I know that I wanna make you mine forever.”

Riley proposed to Maurissa with a pear-shaped diamond ring. The ring was surrounded by 43 round-cut diamonds (a total of 2 carats) and set in handmade platinum that was signed by Lane, according to People. Lane told People that he chose the ring because it was “straight to the point,” just like Riley and Maurissa’s relationship. “This is what draws Riley into Maurissa — she knows what she wants and gets right to the point,” he said. “This ring felt like a perfect reflection of their relationship.”

After their engagement, Riley and Maurissa made history as the first Black couple in Bachelor Nation history to get engaged. “Going into this, I guess the social media and the media is kind of what let us know that we are the first Black couple to come out of this,” Maurissa told People in October 2021. “Because we just went into it [with an] open mind. Our hearts were open and we just happened to meet each other and we look alike, which is even better!” Riley added, “[We/re] just focused on finding love and building a connection.” “The person that we found love with also happens to look like us, which is great. It’s great for the culture. So, I mean, love is love.”

READ:  Chrissy Teigen Had A WHAT Transplant??

Why did Riley and Maurissa break up after Bachelor in Paradise? 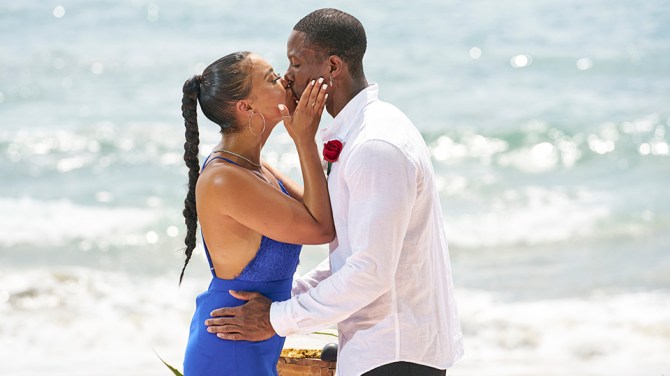 Why did Riley and Maurissa break up after Bachelor in Paradise? Riley and Maurissa confirmed to People on January 24, 2022, that they had split and ended their engagement three months after the Bachelor in Paradise season 7 finale. Their breakup came a couple weeks before their announcement. “We have decided to go our separate ways. Never did we imagine this, but we’ve come to a point where we both need to work on ourselves,” they said in a joint statement. “We’ve appreciated everyone’s love and support so far throughout our journey and we just ask that you please respect our privacy as we navigate through this.”

The announcement came after Maurissa deleted all her photos with Riley from her Instagram and posted a mirror selfie of her without her engagement ring on her Instagram Story. (As of writing this, Riley still has his photos with Maurissa on his Instagram.) The announcement also came after Riley and Maurissa seemed to shade each other on Twitter. “Sometimes you just have to see people for who they are, and not the potential they have,” Maurissa tweeted on December 30, 2021. Riley, for his part, tweeted a bullseye emoji in response to a tweet that read, “If it compromises your mental health or happiness don’t be afraid to walk away!”

Riley also seemed to hint at his breakup with Maurissa in a tweet on January 6, 2022, which read: “Try not be stagnant when facing obstacles that are beyond your control. Just do what you can. That way, when things finally do fall into place, you’ll be able to hit the ground running.” Maurissa also retweeted a tweet from Kelley Flanagan, a fellow contestant from The Bachelor season 24 with Peter Weber, about breakups on January 23, 2022—a day before she announced her split with Riley. “You break your own heart by making someone more important to you than you are to them. Never play yourself like that,” the tweet read. Maurissa liked a tweet from @poemporns January 17, 2022, that seemed to hint that she plans to keep the reason for her and Riley’s breakup a secret. “Idk who needs to hear this but you don’t always have to tell your side of the story. Time will,” the tweet read.

Who is Riley from Bachelor in Paradise? 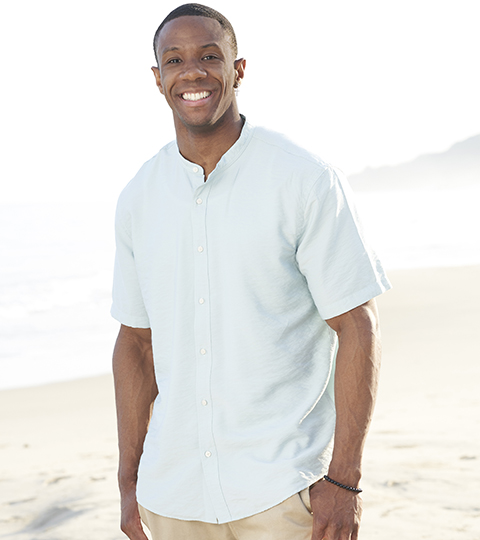 Riley Christian, a 31-year-old attorney from Long Island, New York, was a contestant on The Bachelorette season 16 with Clare Crawley and Tayshia Adams. He was eliminated in week 9 in seventh place. During the show, Riley revealed that he was named Dwayne Henderson Jr. after his father but legally changed his name to Devon Riley Christian when he got older after he learned more about the person his father was. Riley joined Bachelor in Paradise season 7 in episode 3. Riley works as an associate for Aaronson Rappaport Feinstein & Deutsch, a law firm with offices in New York City and Garden City, New York. According to his bio on the firm’s website, Riley graduated from the University of Findlay in Findlay, Ohio, in 2013 with a bachelor’s of arts in journalism. He then received his juris doctor degree from Syracuse University College of Law in 2016. Before he joined his current firm, Riley practiced as no-fault litigation associate at a plaintiff’s firm. He’s most experienced in mass tort and landlord and tenant litigation, and is licensed to practice law in the state of New York.

In his Bachelorette bio, Riley described himself as a “self-proclaimed workaholic” who is ready to find love. “Riley is a self-proclaimed workaholic who is here to give himself a real shot at finding love. After attending a small college in Ohio, he moved to New York City to attend Syracuse School of Law and pursue his dreams of being a big city lawyer,” his bio reads. “Since graduating, he has been working as an attorney practicing medical malpractice and the grind has been nonstop. He’s ready to shift his priorities and believes that this is truly the perfect time for him to meet his soul mate and begin the next chapter of his life. Riley says he is looking for a woman he can be his authentic self with.”

His bio continues, “The ability to carry a good conversation means a lot to Riley, but please don’t ask him to go to a museum with you because that’s not going to happen. He’d rather check out a new restaurant or spend the day at the ballpark enjoying the game over beer and hot dogs. He can’t wait to have a family of his own and Riley plans to be an amazing father. In fact, he’s already planning his first family vacay – a tour of every single MLB stadium in the country. Sounds like a homerun to us!”

Who is Maurissa from Bachelor in Paradise? 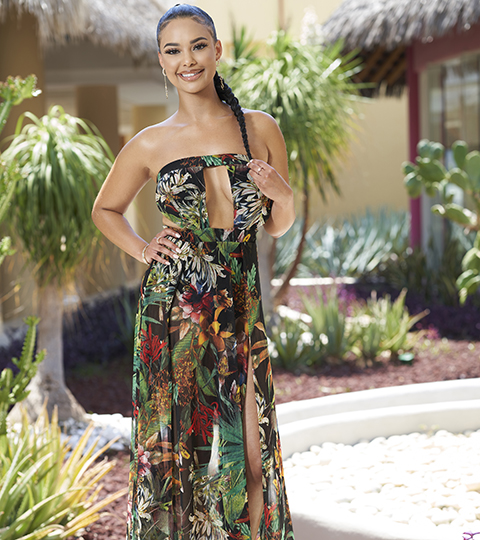 Maurissa Gunn, a 25-year-old patient care coordinator from Atlanta, Georgia, was a contestant on The Bachelor season 24 with Peter Weber. She was eliminated on night one. Maurissa was one of the original contestants on Bachelor in Paradise season 7 and had a romance with Connor Brennan, a contestant from The Bachelorette season 17 with Katie Thurston, before Riley arrived. According to her Linkedin, Maurissa has worked as a patient coordinator at Panacea Plastic Surgery since April 2019. She graduated from Montana State University Billings in 2017. Per her Instagram bio, Maurissa is originally from Montana but moved to Atlanta.

In her Bachelor bio, Maurissa, who was also the 2013 Miss Teen Montana USA and competed in the Miss Teen USA pageant, revealed that pageants made her insecure about her weight, which led to body image issues. She also disclosed that she had a five-year relationship with her high school sweetheart before their breakup four years before her season of The Bachelor. “Maurissa is a bold beauty that is ready to find her husband. In high school, Maurissa competed in the Miss Teen USA pageants and was crowned Miss Teen Montana, but she says it was one of the worst times in her life,” her bio reads. “She was average size for a teenage girl, but the pageant world made her feel insecure about her weight, which lead her to struggle with body image issues. During this time, Maurissa was in a five-year relationship with her high school sweetheart.”

READ:  Kim Kardashian Shows Off Her Behind As She Models SKIMS Bodysuit

Her bio continues, “He was always someone who encouraged Maurissa to feel beautiful, and she thought she was going to marry him. Unfortunately, the two of them had conflicting ideas for the future, and they broke up when Maurissa realized that he did not want to get married as soon as she did. Soon after the breakup, Maurissa moved to Atlanta and stepped up her fitness routine. As of now, Maurissa has lost 80 pounds and wants to keep going! For the last four years, Maurissa has dated around but hasn’t found anyone as serious about marriage as she is. She’s looking for a man who is fun spirited, but also ready for a commitment.”

For her fun facts, Maurissa listed the following:

Bachelor in Paradise is available to stream on Hulu. Here’s how to watch it for free.