Meet their son and two daughters.

Given how private their parents are, details about Jennifer Garner and Ben Affleck‘s kids can be pretty hard to come by. But that doesn’t mean they don’t exist! We’ll get into everything we know about Ben Affleck’s kids with his ex-wife Jennifer Garner up ahead, but first, here’s a little bit of background on their relationship as co-parents.

Ben Affleck and Jennifer Garner first met in the summer of 2000 on the set of their movie, Pearl Harbor. Although the film flopped, it marked the start of something more for both of them. Jen was married at the time to actor Scott Foley, whereas Ben soon went on to date another Jen, Jennifer Lopez. Despite this, the Argo director and 13 Going on 30 actress remained friends, and by late 2004, they both found themselves single and ready to rekindle their relationship. The pair were quickly engaged and officially went on to tie the knot in 2005.

During their marriage, Ben and Jen welcomed three kids together: two daughters and a son. Unfortunately, however, their marriage wasn’t meant to be. The A-list couple announced their split in June 2015 following 10 years of marriage via a joint statement, reading, “After much thought and careful consideration, we have made the difficult decision to divorce. We go forward with love and friendship for one another and a commitment to coparenting our children whose privacy we ask to be respected during this difficult time. This will be our only comment on this private, family matter. Thank you for understanding.”

READ:  Cher Goes from Blonde to Brunette and Back Again in Giggly TikTok Debut for Pride Month

Although the Hollywood duo has put their romantic relationship behind them—Jen has been linked to on-again, off-again boyfriend John Miller, whereas Ben has sparked dating rumors with his ex-fiancée, J-Lo— it is their role as co-parents that matters most to both of them. “Jen is a superhero mom,” Ben once told E! reporters in March 2016.  “She is an amazing mother and I’m really lucky to have her as a partner to co-parent these kids with. We try our best, we put them first and that’s what we do.” 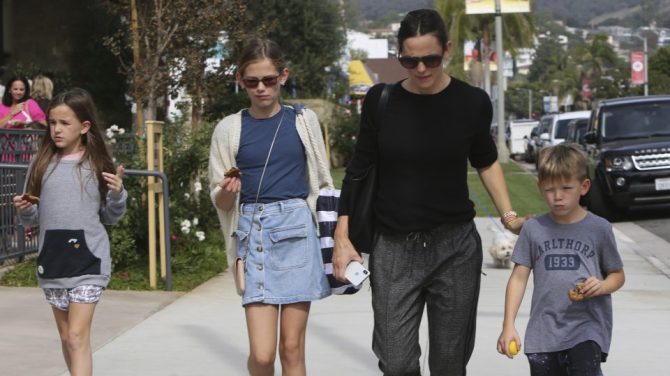 Read on to learn more about Ben Affleck’s kids Samuel, Seraphina, and Violet Affleck, whom he shares with his ex-wife Jennifer Garner, below.

Ben Affleck and Jennifer Garner’s eldest daughter, Violet Anne, was born in December 2005—just four months after her parents tied the knot on the island of Parrot Cay, Turks & Caicos (yes, Jen was pregnant at her wedding). Although Violet certainly takes after her mother’s looks—she is tall and gorgeous just like her mom—Jen says that her personality makes her 100% “Ben Affleck’s daughter.”

In an interview with The Hollywood Reporter in March 2021, Jennifer opened up about one moment when Violet was little that proved she was already taking after her dad. “Violet’s hyper-articulate —she is Ben Affleck’s daughter,” Jennifer said, before recounting her daughter’s reaction to the paparazzi as a child. “She stood up on a chair in a little velvet dress, with her hair a bit back and her glasses on and she didn’t say her R’s right, and she said: ‘We didn’t ask for this. We don’t want these cameras, they’re scary. The men are scary, they knock each other over and it’s hard to feel like a kid when you’re being chased.’”

While she’s already a teen, Jen isn’t too worried about Violet getting into the dating scene. “All I know is she’s in Zoom school,” she said during a December 2020 episode of the TODAY show, noting that her daughter is currently enrolled in an all-girls school.

Jen gave birth to her and Ben’s second daughter, Seraphina, in 2009. Unfortunately, there aren’t too many public details that have been shared about their middle child.

Samuel is Ben Affleck and Jennifer Garner’s only son and the youngest of their kids. Sam arrived in 2012, and it looks like he already has a great sense of humor like his mom. “Apparently, birthing and raising someone is valued at $168.42,” Jen captioned a photo of a check Samuel wrote out to her in January 2020. The service? “Being my mama,” the check description read. “I guess I should keep my day job,” she joked, before adding the hashtags: “I would be his mama for free” and “oh wait, I already am.”