When it comes to summing up Ashley C. Ford’s childhood, “complicated” feels like a cop-out, but it’s maybe the only accurate way to say it. Fraught with hurt and confusion, tinged with love and beauty, Ford lays out those years in vivid, painful detai… 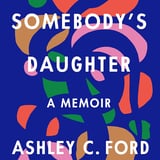 When it comes to summing up Ashley C. Ford's childhood, "complicated" feels like a cop-out, but it's maybe the only accurate way to say it. Fraught with hurt and confusion, tinged with love and beauty, Ford lays out those years in vivid, painful detail in her stunning debut memoir, Somebody's Daughter, (out June 1).

Growing up in Indiana, Ford can't imagine a world without her big, loud, sprawling family, and especially the two women at the center of it: her mother and grandmother. Though at times charming and playful, Ford's mother also violently punishes her children for seemingly small offenses, and Ford learns to live around this apparent split in her personality, which she understands as the difference between her loving "Mama" and punitive "Mother." The tension and stress of waiting for the next outburst leads to panic attacks, Ford's precocious intellect strangled by anxiety and abuse. At the center of it all is the bleak absence of her father, who's been in prison as long as Ford can remember - and no one will tell her why.

Fraught with hurt and confusion, tinged with love and beauty, Ford lays out those years in vivid, painful detail in her stunning debut memoir.

She longs for his love and protection, especially when puberty hits and older men start to target her. Ford blames herself and learns to feel shame. "My body grew into something that could only be perverted," she writes. At age 13, a man pulls over to ask for her number. When Ford tells him her age, he gets angry. "Go home and tell your mama she needs to be dressing you like you're thirteen," he tells her. "You almost didn't get treated by somebody's child." Ford looks down at her jeans and T-shirt. "What about my clothes said I wasn't thirteen? What about me kept telling the rest of the world I wasn't a child?"

Related: What White People Can Do Next Shows How a Postracial Society Is Possible in Our Lifetime

Ford's first relationship ends in traumatic assault, and soon afterward, she finds out her father's crime. Her world shattered, her teenage years swallowed up by chaos and poverty, Ford eventually realizes she has to escape, even if it means leaving behind the family that has defined her for so long.

For as much hurt as Ford lives through, her book glows with compassion. In her mother's outbursts of fury, she recognizes generational violence and emotional abuse, along with a fierce determination to protect her children. Ford herself wrestles with her love for her father, a man who committed a horrific crime, and the guilt of knowing she has to leave her family to live the life she wants. There are no neat solutions, only honest ones. In showing that, this empathetic and sharply written memoir shines.

"In the stillness of the nights that kept on coming at the end of every day, no matter how pleasant or productive the day had been, I wondered if something was wrong with me for ever loving my father in the first place. It made sense why everyone who knew the truth couldn't look me in the eyes when I asked. They didn't want me to feel ashamed, but they already felt ashamed for me. I saw it on their faces, pointed in my direction."

Searing memoirs like Educated by Tara Westover, Boys of My Youth by Jo Ann Beard, and anything by Glennon Doyle.

If you're reading this one for the 2021 POPSUGAR Reading Challenge, use it for these prompts:

Give this one five to six days - it's not too long, but you'll want to take your time on the tough subject matter.

Related: TikTok Has Spoken: You Need to Read These 11 Books ASAP

Anybody who likes tangled, emotionally honest family sagas. It's also a good one to debate and dissect with your book club.

In Somebody's Daughter ($23), Ashley C. Ford reflects on a childhood of pain and violence, colored by her father's incarceration and her mother's anger and loneliness, to find the moments of love that lead her to peace.