HBO’s The Gilded Age is certainly drawing comparisons to Downton Abbey, and it’s easy to see why! Both shows are historical dramas set more than a century ago (although a few decades apart), both feature the glamour and extravagance of the ultra-wealt… 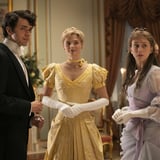 HBO's The Gilded Age is certainly drawing comparisons to Downton Abbey, and it's easy to see why! Both shows are historical dramas set more than a century ago (although a few decades apart), both feature the glamour and extravagance of the ultra-wealthy elite, both showcase similar character archetypes, and both are from the pen of series creator Julian Fellowes. Given all of these commonalities (and the fact that we live in the world of "extended universes"), could there perhaps be a Downton Abbey/Gilded Age crossover on the way?

Gareth Neame, who is an executive producer on both The Gilded Age and Downton Abbey, answered that question definitively: Nope, they aren't connected!

"[A crossover is] not in the thinking at all," Neame told TVLine. "It's a separate universe, but they're both fictions set in the 1880s. Downton Abbey, in its own fiction, was definitely there. A younger version of the Maggie Smith character would be living there, I guess. But it's not really planned."

Neame's answer is not particularly surprising, but it's also understandable why viewers might have the question. After all, Downton Abbey's entire backstory hinges on a major element of the actual Gilded Age era, which HBO's The Gilded Age explores in even more detail.

In the last few decades of the 1800s, "new money" families in America became fabulously wealthy through industry and trade. Despite their wealth, they found the doors to long-established high-society circles shut to them, and old-money families looked down on them as interlopers. In search of social prestige to match their wealth, many of these families set off to Europe, where many aristocratic families were in dire financial straits. Although they didn't precisely approve of the new, gaudy families either, many aristocratic heirs married American heiresses with massive dowries as a means of shoring up their precarious estates.

READ:  Beyonce’s Biggest Surprises, From Her Pregnancies to Music

This is, as every Downton fan well knows, that show's backstory: Cora is an American heiress (who would have been a young woman around a similar time as The Gilded Age is set) who marries Robert, soon-to-be Earl of Grantham, in an arranged match that grows into a loving marriage.

For those hoping for Downton Easter eggs, it doesn't sound like those will be forthcoming. For those just looking for a glitzy new historical drama, though, The Gilded Age is just the right pick!