Will Pauly D’s attempt to recreate their Karma days save the night?
After slamming her costars for their dicey wedding toast, Angelina Pivarnick just found out the hard way that speechwriting actually isn’t all that easy.
… 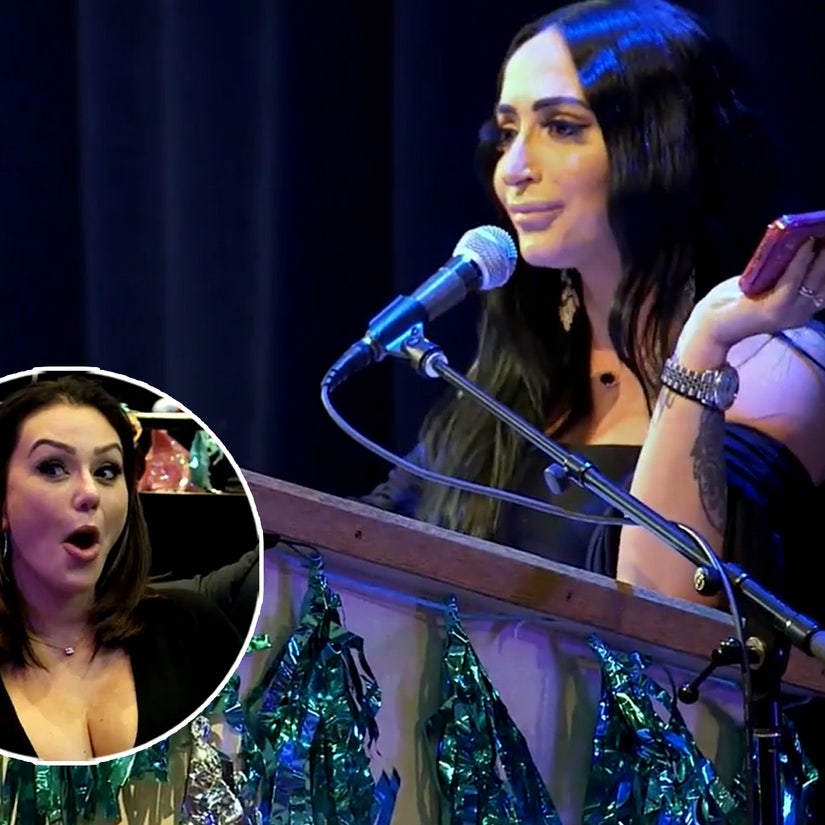 Will Pauly D's attempt to recreate their Karma days save the night?

After slamming her costars for their dicey wedding toast, Angelina Pivarnick just found out the hard way that speechwriting actually isn't all that easy.

As the "Jersey Shore Family Vacation" talent show continues in celebration of Jenni "JWoww" Farley's birthday, Angelina takes the podium to deliver her own roast in this exclusive sneak peek. Like the one made by JWoww, Nicole "Snooki" Polizzi and Deena Nicole Cortese during her wedding reception, this one doesn't land either.

"My husband told me that your f---ing fiancé is a size 15 shoe, is that true? Oh my god, that's huge. Damn," she begins, followed by awkward silence interrupted by Snooki sarcastically shouting, "You're great, keep going!"

In a confessional, Polizzi revealed how she really felt about the situation -- saying, "I don't know what the f--- is happening, this is a s--- show," an opinion held by many of her costars.

"You must be sucking that thing good, boy," Pivarnick continued, getting shocked reactions from the crowd as Vinny Guadagnino -- who helped her craft the speech -- yelled, "That wasn't the punchline, idiot!" from offstage.

"It's very apparent Vinny worked very hard on this talent show tonight, but it's also very apparent that Angelina's worked just as hard to ruin it," said Mike "The Situation" Sorrentino in a confessional. "Which, at the end of the day, might make everyone laugh and might be just what we needed."

As Mike shouted "Save her! Save her!" and Jenni screamed "Turn the mic off!", Pivarnick redeemed herself at the very end of her tribute.

READ:  Lil Baby & Lil Durk Release The Video To ‘The Voice Of The Heroes’ (Video)

"Seeing you and your kids this trip makes me look up to you as mother, a person, friend, businesswoman and speech giver. Actually, forget that speech giver part, we both f---ing suck, let's be honest," she joked. "We've made so much progress, in my opinion, we went from enemies to frenemies and I'm hoping instead of being frenemies, we can be real friends going forward."

Jenni thanked her for the speech, while Vinny, overall, felt like the talent show was "kind of like a beautiful disaster" and "the worst, best thing I've ever seen."

With everyone flying high, Pauly D ended the night the best way he knew how -- by turning the Poconos retreat into a makeshift club Karma for the night. Watch them all beat the beat to the best of their now-older abilities above!