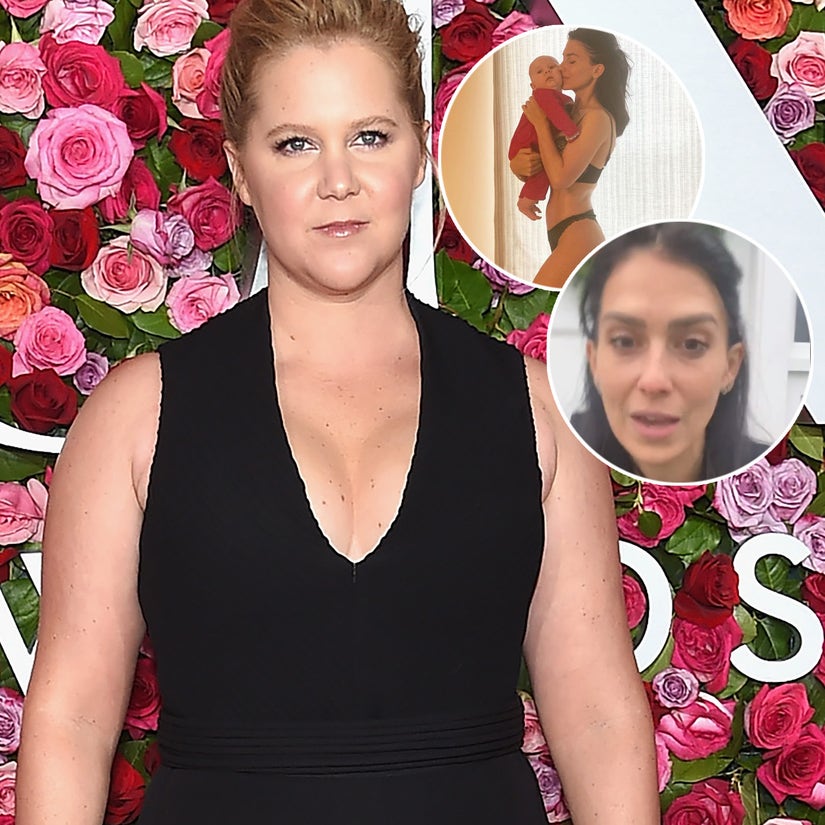 It was her joking photo swipe that led to people questioning Baldwin's in-and-out accent -- see what the comedian thinks about it all now.

Amy Schumer kind of has Hilaria Baldwin's back amid the tumultuous scandal about her so-called Spanish heritage, which is actually just Boston and having spent time in the European country while growing up.

We can only give this a "kind of," because it feels more like Amy thinks maybe Hilaria has suffered enough at this point.

Oddly enough, Amy has been embroiled in the madness since the very beginning, as it was her joke and photo swipe that led to Spaniard-gate in the first place. More specifically, it was Hilaria's video response to the body-shaming she said she endured as a result of Amy making her photo go viral with her joke.

The picture in question is one of Hilaria in her underwear and holding her baby, showing off a very slender and toned physique. Amy, a relatively new mom herself, quickly swiped the picture and jokingly tried to pass it off as her over on her own Instagram page.

While Amy apologized and took down her post after Hilaria started saying she was getting bullied over it, that didn't stop her from throwing another dig once a whole different controversy erupted.

Fans were quick to notice that Hilaria, who has claimed to be from Spain, had absolutely no discernible Spanish accent in that video -- though there are clips of her from various television appearances over the years with one.

From there, it was just a matter of time before people were sharing that Hilaria from Spain was just Hilary from Boston, for which Hilaria had an explanation. But as the simmer started to boil, Amy jumped into the fray again.

Sharing a true selfie of herself this time, she jokingly captioned her post, "I get it. I went to Spain a couple times and loved it too."

As things reached a fever pitch, with both Hilaria and husband Alec Baldwin both addressing the controversy multiple times before going social media silent, Amy removed this second post as well.

"Oh my god, I really don't even know what to say. I didn't know that was going to happen, obviously," Amy told Entertainment Tonight on Tuesday. Calling it "insane and entertaining," Amy joked that Hilaria may be the "only person who is happy about the insurrection in the Capitol," if only because it redirected people's attention.

As for why she pulled her own posts, Amy said that the first one was an easy decision, because Hilaria "seemed a little bit upset," she explained. "Not at me, but about the comments she was getting. I was just like, I don't want to be mean, and she seemed like maybe it hurt her feelings, so I just took it down."

When the Spain scandal started to emerge, Amy was just as fascinated and perplexed as everyone else, so she reacted as any comedian would ... with a joke. "But then it became this whole big thing and people were really upset so I just took it down [too]," Amy said.

READ:  Macaulay Culkin Is All For Donald Trump Being Digitally Removed From Home Alone 2!

Her goal, she said, as things became more heated and serious was to perhaps take herself "out of the narrative," as she'd been inexplicably tied to the whole saga due to her role in its genesis.

That said, she's not below cracking another joke about it, telling the outlet, "She is amazing and I wish her and her family the best. And I hope she gets to visit Spain as much as she wants."

But the bottom line is that Amy didn't want to be part of what was causing so much pain and turmoil in Hilaria's life, no matter what she may or may not have done to exaggerate her connection to Spain.

"Look, she's a mom. She has a million and a half kids, and that's really hard. So I just-- I don't want them to be going through a bad time," Schumer said. "But also, you can't just pretend you're from Spain."