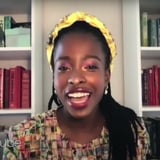 Nearly one week after captivating the nation with a powerful poem recitation on Inauguration Day, Amanda Gorman appeared on The Ellen DeGeneres Show to recap the history-making moment - including quite the entertaining exchange she overheard during Joe Biden and Kamala Harris's swearing-in ceremony. The 22-year-old poet admitted that she actually didn't have the chance to practice delivering her poem, titled "The Hill We Climb," as much as she would've preferred, which was not as all detectable as she commanded attention on stage at the Capitol. "I'm really glad that I was still able to stick the landing," she said.

And stick it she certainly did - in the presence of notable politicians and big-name celebrities, no less. Amanda and her mother were seated next to Jennifer Lopez and Alex Rodriguez during the festivities, and Barack and Michelle Obama were casually within earshot, allowing Amanda to listen in on a funny conversation between the former first couple. "[Michelle] kind of kept yelling at Barack like, 'Stop hugging people. Stop getting close to people.' And then when I was done, she kind of pushed him out of the way and gave me the biggest, warmest Michelle Obama hug." Hah! I mean, Barack did share embraces with everyone from Lady Gaga and Hillary Clinton to Joe and Jill Biden that day, in addition to his fair share of fist bumps. She was just looking out for her hubby's safety and well-being amid the pandemic!

Related:
Get to Know Amanda Gorman, the Inaugural Poet With Her Own Presidential Plans

Watch the rest of Amanda's interview above to hear her discuss the internet-breaking aftermath of her inaugural presentation, and then be sure to read up on these fun facts about her once the video has concluded.

READ:  Is Dua Lipa Pregnant? The Star Responds to Those Suggestive Photo Captions