Since its premiere, fans have been on the hunt for The Falcon and The Winter Soldier Easter eggs and clues about the show’s ties to other Marvel Cinematic Universe movies and the comics its characters are based on.

The Falcon and The Winter Soldier, which is Marvel’s second TV series after WandaVision, premiered on Disney+ on March 19, 2021. The series stars Anthony Mackie and Sebastian Stan as Sam Wilson (a.k.a. Falcon) and Bucky Barnes (a.k.a. Winter Soldier) respectively and is set six months after the events of Avengers: Endgame, which saw Steve Rogers (a.k.a. Captain America) pass his shield to Sam and name him the new captain after he traveled back in time to return the Infinity Stones to their proper timelines.

When Steve, who stayed in the past and grew old, reunited with Sam in the present, he gave him Captain America’s near-indestructible vibranium shield and passed him the mantle. The Falcon and The Winter Soldier sees Sam team up with Bucky, a former rival of Captain America’s, for a worldwide mission.

“The show is very honest and forthright and very unapologetic about dealing with the truth of what it means to be American, Captain America, Black Captain America—and if that’s even a thing,” Mackie told Entertainment Weekly in March 2021 “I think picking up from where we left off at the end of Endgame, the show progresses extremely well by asking those questions and really explaining why Sam said the shield feels like it belongs to someone else.” 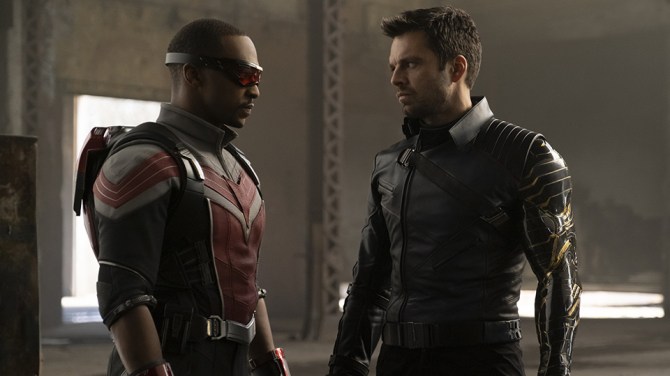 In Avengers: Endgame, an elderly Steve Rogers asks Sam how it feels to hold Captain America’s shield. “How does it feel?” Steve asks. Sam responds, “Like it’s someone else’s.” Steve then says, “It isn’t.” In the first scene of The Falcon and The Winter Soldier, the viewer hears the same conversation replay as Sam holds Captain America’s shield. The scene also shows Sam with the same bag Steve gave him to hold the shield in Avengers: Endgame.

Lieutenant Joaquin Torres (played by Danny Ramirez), an officer in the United States Air Force, is introduced in episode 1 of The Falcon and The Winter Soldier. In the comics, Joaquin takes on the mantle of Falcon as a human-bird hybrid and becomes Sam’s new sidekick after he becomes Captain America.

In The Falcon and The Winter Soldier, Redwing is a drone-like bird that fights with him in the air. But in the comics, Redwing is actually a real falcon that Sam shares a telepathic link with.

In episode 1, Joaquin tells Sam that he’s tracking a group called Flag Smashers. In the comics, Flag Smashers is a supervillain who fights with Captain America and is on a mission to liberate Earth from national rule.

During the scene where Sam gives Captain America’s shield to the Smithsonian, a poster of Captain America is seen on Sam’s left side, which is a nod to a fan-favorite moment in Captain America: The Winter Soldier, where Sam tells Steve “on your left” as they’re running next to each other.

Bucky Sleeping on the Floor

The first episode also sees Bucky sleeping on the floor, which was a reference to a conversation Steve and Sam had in Captain America: The Winter Soldier, where they talked about how difficult it was to adjust to everyday life, specifically sleeping in a bed.

Bucky’s List in episode 1 includes the names of several Marvel villains he’s faced in the comics and MCU, such as Rostov (a.k.a. the Red Barbarian who imprisoned him in the comics) and Zemo (a.k.a. Helmut Zemo) the main villain in Captain America: Civil War. The list also includes the name Kaminski, which is a nod to Len Kaminski, the Marvel comics writer who worked on Sam’s issues.

The scene where Bucky helps Yori in an alley was a nod to when Bucky saved Steve in an alley in Captain America: The First Avenger when they were younger.

Episode 1 ended with a cliffhanger when it revealed John Walker (played by Wyatt Russell) as the new Captain America. Here’s what to know about the character.

The end credits of the first episode include the name “Madripoor,” which is a country in Southeast Asia in the Marvel comics. It’s also where the X-Mansion built by Magneto was in the X-Men comics.

The credits also include the date December 16, 1991, which is the date Tony Stark/Iron Man’s parents were killed by the Winter Soldier.

The title of the episode is a reference to when Steve was used as a piece of propaganda in Captain America: The First Avenger to convince people to buy war bonds. The movie also featured the song “The Star-Spangled Man,” which was written by Alan Menken and David Zippel. When the new Captain America is seen on Good Morning America, viewers hear an updated version of that song played by the high school marching band. The clip of John signing Captain America merchandise is also similar to when Steve shook hands and signed autographs during “The Star-Spangled Man” scene in The First Avengers.

Custer’s Grove is talked about in episode 2. The fictional town is where John is from in the comic books. Though that part is from the comics, John’s wife, Olivia Walker, seems to be created for the series. In the episode, John also mentions that he’s been a “captain before,” which refers to his time in the military.

Episode 2 saw the introduction of Isaiah Bradley as a secret Captain America in the 1950s. Bradley was introduced in the 2003 comic book series, Truth: Red, White and Black, in which Steve discovers that scientists tried to replicate the super soldier serum and experimented on Black soldiers. Bradley was the lone survivor of the experiment and fought against the Nazis. Like the show, he was punished and went to prison for years before he was pardoned and spent the rest of his life in obscurity.  It’s also believed that his show counterpart is inspired by William Burnside, another Captain America replacement in the comics.

Pay attention to Eli, Isaiah’s teenage grandson. Eli (whose full name is Elijah) was introduced in the 2005 Young Avengers comics. He became the leader of the Young Avengers under the name Patriot. His grandfather gave him a blood transfusion, which gave him super soldier powers. Eli joins WandaVision‘s Billy and Tommy and Hawkeye‘s Kate Bishop as other Young Avengers to be seen in the MCU.

Battlestar, a.k.a. Lemar Hoskins, was introduced in episode 2. In the comics, Lemar is a professional wrestler who was given super strength from the Power Broker. When John Walker took over as Captain America, Lemar became the new Bucky and went by Battlestar.

The scene where a Baltimore kid calls Sam “Black Falcon” is a nod to other Black superheroes who used “black” in their title, such as Black Panther, Black Lightning and Black Vulcan.

Power Broke is the name of the third episode. In the comics, Power Broker is Curtiss Jackson, who ran a corporation that used super science from Dr. Karl Malus to give super strength to people for a price. That price was indentured servitude in his pro-wrestling promotion, according to Den of Geek. When he was forced to give himself super strength, Curtiss transformed into giant.

Episode 3 saw the introduction of a criminal named Conrad Mack. a.k.a. Smiling Tiger, who Falcon pretends to be to blend in in Madripoor. In the comics, Conrad is a human mutate and has powers due to his exposure to magic, radiation and other outside factors. He’s also gold, has a pointed face, no nose and sharp, red claws.

Sam and Bucky find Dr. Wilfred Nagel in Madripoor. Dr. Nagel is the man who created the Super Soldier serum for Power Broker. Dr. Nagel was introduced in the comics, Truth: Red, White and Black, as a World War II scientist who worked on Project Rebirth, an initiative that created the Super Soldier serum and Captain America. In the comics, he also re-created the formula and experimented on Black men to make a superhuman.

Flag Smasher Hector Lennox was shouted out by a lead Smasher in episode 3. In the comics, Hector is a part of a super-strength trio known as the BUCkies (Bold Urban Commandos). At first, they worked with John during Super Patriot rallies to stage attacks so John could be seen as a hero. When John became Captain America, he took one of the BUCkies, a.k.a. Lemar Hoskins (Battlestar), as his sidekick. That left Lennox and the third BUCkie, Jerome Johnson, with nothing to do. Together, Johnson and Lennos became Right-Winger and Left-Winger and teamed up to get revenge on John.

The episode 3 cliffhanger featured Ayo of the Dora Milaje. Bucky comes face to face with her while following a lead in Latvia. She’s there because she wants Zemo, the man who assassinated Wakanda king T’Chaka. In Captain America: Civil War, Ayo was the first member of the Dora Milaje introduced in the MCU. She was seen as the Black Panther’s bodyguard during a trip to Berlin after the assassination of his father. She also appeared in Black Panther and Infinity War.

The Falcon and The Winter Soldier airs Fridays on Disney+. Here’s how to watch it for free.