Alison Oliver is at the center of the new Hulu miniseries “Conversations With Friends,” based on the bestselling novel of the same name by Sally Rooney. Oliver’s Frances is a college student in her early 20s, who, to borrow some lyrics from her costar… 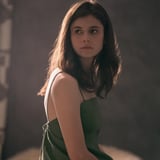 Alison Oliver is at the center of the new Hulu miniseries "Conversations With Friends," based on the bestselling novel of the same name by Sally Rooney. Oliver's Frances is a college student in her early 20s, who, to borrow some lyrics from her costar Joe Alwyn's girlfriend, is "happy, free, confused and lonely at the same time." She is miserable and magical.

Oliver tells POPSUGAR that auditioning for the part was unique because she was already so familiar with the source material. "I had read the book before I auditioned and had such a massive reaction to it. I just thought it was incredible and read it in like a day," she says. "I had that audition a couple of months later, and it was really an interesting thing to step inside a character you felt like you already really knew."

The novel "Conversations With Friends" is told entirely from Frances's perspective with a first person point of view. Readers sink into the lull of Frances's inner monologue and all her anxieties and fears. The show also follows Frances closely, but Oliver has the unenviable task of bringing the character to life when the audience can't access every thought in her head the same way. "That book exists because [Frances] is so in her head," Oliver says. The actor explains that she spent hours with the book before filming and during production. While actually shooting scenes, she says, "I always tried to let the thoughts be in her head all the time."

"I think Bobbi has quite a territorial thing about Frances. They were each other's first loves."

"She is often on the outside, so I was able to have that running commentary while other people were speaking," Oliver explains. "I loved having that internal bible to work from and be able to play in each scene."

Though Frances can be a bit of an enigma, she draws three very different people close to her: her ex-girlfriend and best friend Bobbi (Sasha Lane), her lover Nick (Alwyn), and his wife Melissa (Jemima Kirke). Frances herself sometimes can't figure out what they see in her, but Oliver has some thoughts on the three complicated dynamics.

"I think Bobbi has quite a territorial thing about Frances. They were each other's first loves," she says. "I guess once she starts to see Frances embark on this relationship with Nick, it obviously unearths feelings that haven't been addressed." Bobbi, according to Oliver, "loves [Frances] for who she is," but watching the show, sometimes you wonder if they would be happier apart.

Nick, Oliver says, feels like Frances is his kindred spirit, another person who always ends up on the outside. She explains, "So many people describe him as passive or maybe difficult to talk to. Whereas I think because Frances has that similar quality of that withholding kind of thing, I think he can look at her and recognize that in himself and is drawn to all of her cringey bits." It also helps that Nick has very low self-esteem, and the 32-year-old struggling actor is happy to receive validation from the younger woman since he doesn't get it from his wife.

Which brings us to Melissa, Nick's wife who's a moderately successful writer and ends up supporting them while Nick flails. "I think the relationship with Melissa and Frances is so fascinating because it's constantly ebbing and flowing," Oliver says. "There's so much risk, and there's so much dishonesty and almost playing games."

READ:  Carey Mulligan Has 2 Kids With Husband Marcus Mumford—What to Know About Their Private Family

"I think actually, Frances is envious of Melissa and does actually think that she's an incredible writer and is threatened by her power and her brilliance," Oliver explains of their odd dynamic. "And equally, I think Melissa maybe can feel . . . that judgment from Frances and does want to befriend her and doesn't really understand what this is until she finds out about the affair." The two women don't quite get along, but when they're on screen together, sparks fly.

The two overlapping love triangles at the heart of "Conversations With Friends" are queer, setting the show apart from other tales of infidelity. "I think what's actually so brilliant about this story is that it actually doesn't really go into labels," Oliver says of how the show chooses to depict the sexualities of Bobbi, Frances, and Melissa.

"There's no coming out story or moment," she notes. "It links in with the fluidity of the story of Frances loving more than one person and loving different genders." Frances wonders how Nick can love two people at the same time, but she ultimately finds herself in his shoes, too.

The show is full of sex scenes between Frances and Nick, which will certainly become a hot topic when the show debuts, but "Conversations With Friends" also doesn't shy away from an emotional and fun scene between Bobbi and Frances, too. "I think that was really important for us to explore that side of their relationship too and what their intimacy is and how they're intimate with each other," Oliver said. "I was delighted to do that and represent that."

All 12 episodes of "Conversations With Friends" will premiere on Hulu on May 15.