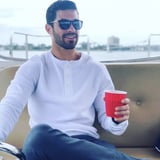 From the moment Spencer Robertson stepped out of the limo during The Bachelorette, Tayshia Adams knew she hit the jackpot. On Tuesday night, Chris Harrison introduced four new handsome men into Tayshia’s life, and it’s safe to say they were each prepared for what awaited them, especially Spencer, who was the first one out of the limo. “Which one of you guys scared away Clare?” he immediately asked the 16 dudes sitting inside the La Quinta Resort. OK, so Spencer definitely made an impression on viewers, on the other contestants, and undoubtedly on Tayshia, as we saw her give him the first impression rose.

Before we start daydreaming about the beautiful couple Tayshia and Spencer make, let’s get to know the man behind said rose. Who is Spencer Robertson, anyway? According to his bio on ABC, the 30-year-old from La Jolla, CA, is a water treatment engineer. He studied chemistry at the University of Oregon, where he also played division I lacrosse for four years. Not only that, Spencer was captain of the team during his senior year! He’s since founded his company, Robertson Water Treatment. Yeah, we’ll just go right ahead and call him a catch.

Spencer and the four new guys have definitely shaken things up in the Bachelorette mansion, and he’s already making himself known with the guys and Tayshia. Check out photos of Spencer ahead, and then meet some other contestants here.

Related: The Bachelorette: Tayshia’s Divorce Is Just Part of Her Journey to True Love

“I know the impact that he had on my life,” says Bailon, who attended Hillsong New York in the past.
Fired Hillsong pastor Carl Lentz has one celebrity in his corner: “The Real” cohost Adrienne Bailon.
Lentz, who was the …

“To see my body change inside and out so drastically has been a wild experience. Surprising and beautiful.”
Emma Roberts is getting real about the ups and downs of being pregnant during lockdown.
In a candid interview wit…

Courtesy of Nicole Scherzinger/Instagram As easy as one, two, three! Nicole Scherzinger shares her hilarious and simple tips for slaying in an itty-bitty bikini. On Tuesday, November 10, the 42-year-old took to Instagram to show off her incredible bikini body in a series of snaps, as she lay alongside a pool at sunset. In the […]

The premise of FX on Hulu’s A Teacher reads like a true-crime documentary case: the new miniseries tells the story of a female high school teacher caught in an inappropriate sexual and romantic relationship with her male student at a suburban Texas hi…

So long, Carl Lentz! The disgraced ex-Hillsong Church pastor is going to need a new gig after salacious news was uncovered about an affair he’d allegedly been having with a New York City woman named Ranin. Earlier this month, the 42-year-old father of three — who has been married to his wife Laura (pictured above, inset, with […]

Netflix is really coming through with heartwarming holiday content, and the latest to lift our spirits is Dash & Lily. The series – an adaptation of Rachel Cohn and David Levithan’s 2010 novel, Dash & Lily’s Book of Dares – follows characters …

Pop the champagne because our favorite love-to-hate American is returning to France.

Sponsored content. Us Weekly receives compensation for this article as well as for purchases made when you click on a link and buy something below. Happy Singles Day! This self-loving holiday has seriously caught on, and it’s the ultimate day to treat yourself. And who doesn’t love treating themselves — especially to some new clothes […]

“I was going to do something bad if I didn’t figure something out,” he reveals.
Scott Disick is opening up about what was going through his mind before he decided to seek treatment to work on his past traumas earlier this year.
…

Bachelor in Paradise baby! Krystal Nielson is pregnant with her and boyfriend Miles Bowles’ first child. “The best things in life happen unexpectedly,” the former reality star, 33, captioned her Wednesday, November 11, YouTube reveal. “The best stories began with, ‘And then all of the sudden.’ The best adventures are never planned. Free yourself from […]