The Me Too movement laid bare the ugly creep of gendered violence into every corner of society, from the classroom to the office to the comedy club. Now the next logical step in our national reckoning is to ask what can be done to prevent men from hurt…

According to stepdaughter Zoë Kravitz, Jason Momoa’s much-buzzed-about Golden Globes quick change was an act of chivalry. Though Momoa walked the red carpet at the Jan. 5 ceremony wearing a green velvet blazer, he doffed the coat a…

A tennis player was forced to quit her match in the Australian Open qualifiers after poor air quality caused by huge bushfires left her “scared I would collapse”.

Slovenia’s Dalila Jakupovic was leading Stefanie Vogele 6-4 5-6 at Melbourne Park on Tuesday when she slumped to her knees suffering breathing difficulties.

Huge fires have swept across Australia in recent months, killing 28 people, making thousands homeless and scorching 27.7m acres of land – almost half the area of the UK.

Jakupovic told reporters she was fighting for breath. “I never experienced something like this and I was really scared,” the 28-year-old said. 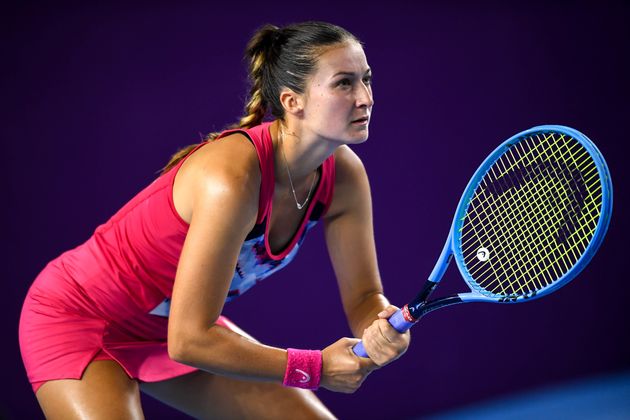 “I was scared that I would collapse. That’s why I went on the floor because I couldn’t walk anymore. When I was on the ground it was easier to get some air.”

Her decision to quit the match came just hours after tournament organisers defended the decision to go ahead with the qualifiers, which were initially delayed because of the poor air.

One Melbourne resident tweeted a photo of the smoky air in the city on Tuesday, writing: “I can see the #AusOpen from my office window.

“It’s hard to believe that players are even attempting to compete in these conditions.”

I can see the #AusOpen from my office window. It’s hard to believe that players are even attempting to compete in these conditions. #melbournesmokepic.twitter.com/nbzP61VZik

Visibility is horrible and you can taste the smoke in the air in Melbourne. A global ranking website rated us as having the second worst air quality in the world at one point overnight. ⁦@abcmelbourne⁩ ⁦@abcnews⁩ ⁦@BreakfastNews⁩ pic.twitter.com/VAJpgogDta

A warmup match between former world number one Maria Sharapova and Germany’s Laura Siegemund at the Kooyong Classic in Melbourne was also abandoned on Tuesday after both players complained about the air.

Five-times Grand Slam champion Sharapova said she felt a cough coming on in the second set.

“After two and a half hours that was the right call for me. I think both of us felt it,” she told reporters.

The pollution prompted warnings from Victoria state’s environment watchdog for people to stay indoors, bring pets inside and shut windows.

Meanwhile, a horse-racing event was cancelled and construction workers downed tools for the day. However, governing body Tennis Australia said early on Tuesday that “conditions onsite [were] improving” at Melbourne Park.

Authorities expect the smoke to linger until Wednesday, when afternoon showers are forecast.

Bushfire smoke has affected a number of elite sporting competitions involving football, rugby league and cricket, and the pollution has raised safety fears at tennis’s first Grand Slam of the year.

Charities will get more government funding to hand out food vouchers, financial counselling and basic essentials in bushfire-hit communities.

Will Hodgman is a Tasmanian and Liberal legend whose leadership has engineered the state’s remarkable turnaround. He leaves behind a record of distinguished service. Cutting unemployment from 7.6 per cent to 6.0 per cent and creating more than 19,200 new jobs. Turning the tide on the 1,000 Tasmanians who left the state each year with … Continue reading “Resignation of Tasmanian Premier Will Hodgman”

Farm, fish and forestry businesses in fire-affected regions will get the help they need to rebuild with an initial $100 million in emergency bushfire funding, which will be made available following agreement with relevant state governments. Prime Minister Scott Morrison said the Government would provide up to $75,000 in grants for farming businesses in fire-affected … Continue reading “Initial $100 million bushfire emergency support for primary producers”

Member for Newcastle Tim Crakanthorp and Shadow Minister for Local Government Greg Warren have called on the NSW Government to urgently intervene and expedite a coastal management program for Stockton Beach. Mr Crakanthorp and Mr Warren met with locals on Wednesday, less than 24 hours after the situation reached crisis point when the town’s only … Continue reading “LABOR CALLS FOR GOVERNMENT INTERVENTION IN STOCKTON EROSION CRISIS”

Netball Australia, supported by Netball NSW and other Member Organisations, has today announced a bushfire relief fundraising showcase match between the Australian Diamonds and a Suncorp Super Netball All Stars team at Qudos Bank Arena in Sydney on Sunday 1 March. The Australian Diamonds will come together outside of official scheduled duties to take on … Continue reading “Australia v All Stars game to headline bushfire plan”

A man will face court today after several prohibited weapons were seized from a home at Cardiff yesterday. About 3.45pm on Monday 13 January 2020, officers attached to Lake Macquarie Police District attended a unit on Macquarie Road, Cardiff, in relation to a concern for welfare. Upon arrival, police spoke with an 11-year-old boy and … Continue reading “Swords, crossbows, tasers, batons seized; man charged – Cardiff”