The US House of Representatives has voted to send two articles of impeachment against President Donald Trump to the Senate.

The world’s tennis community has rallied together to raise funds for those affected by Australia’s bushfire crisis during the AO Rally for Relief.

Mauro Rodrigues and his wife Eunice were in a Nissan Pathfinder, when it flipped and rolled on Forrest Highway at Binningup on Sunday.

The bacteria Naegleria Fowleri was found, which can cause an infection known as Amoebic meningitis.

A man who filled his car with water then drove it during a prank later uploaded to Youtube has faced court on a string of charges.

Media conglomerate News Corp says there is absolutely no evidence linking James Murdoch to the Murdoch family, and have described him as a hoax invented by the ABC to push a socialist agenda. It comes after ‘James’ slammed the company for its stance on climate change. An editorial published in The Australian today said that […]

DES MOINES, Iowa ― Former US Vice President Joe Biden has played a role in some of the most controversial domestic and foreign policy decisions from the 1970s to the 2010s.

He co-authored the 1994 crime bill, lobbied for the 2005 bankruptcy reform bill, and voted for both the North American Free Trade Agreement and the Iraq War. Despite that record, Biden began the presidential race as a front-runner and continues to top the polls in early states, including several recent surveys in Iowa, the first-in-the-nation caucus state where he had previously been weaker.

Foreign policy and international trade, previously lightly discussed, took up large chunks of time. And while there were disagreements between the candidates Tuesday night, in the final stretch before the Iowa caucuses, they largely avoided aggressively attacking one another. Warren and Sanders passed on relitigating what happened in their 2018 meeting, and Biden avoided a pile-on about the Iraq War and his support for international trade deals protested bitterly by labor unions.

The decision to avoid head-on fights was motivated no doubt by the fact that much of the Democratic electorate seems to have little appetite for such squabbles, preferring the focus be kept on attacking Trump and not doing too much lasting damage for the general election.

The greatest beneficiary of the debate’s calm tone was Biden. Tuesday night’s debate was the last chance Iowans had to hear Biden answer in greater detail about his record before they head to caucus sites on February 3. 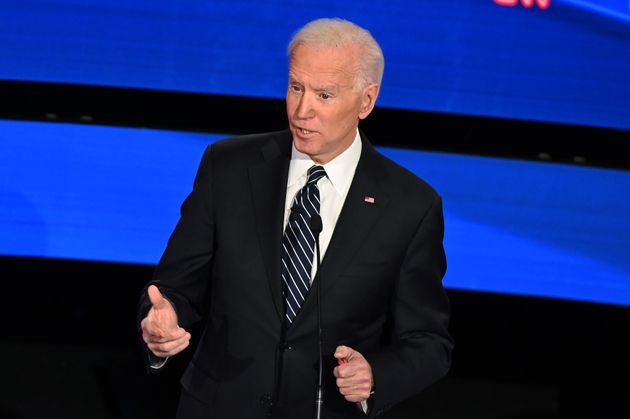 But at the CNN/Des Moines Register Democratic presidential debate on Tuesday night, Biden’s legislative record got less scrutiny from the moderators and his fellow candidates than, say, the potential costs of “Medicare for All” and Sanders’ assorted other social policies.

Sanders, who has for weeks been hammering Biden for supporting the Iraq War and approving trade deals that cost the country manufacturing jobs, did his best to initiate discussions with Biden on both fronts.

Sanders noted that he and Biden were both in Congress in 2002 during the vote to authorize the Iraq War, but unlike Biden, he did not believe Bush administration officials’ claims about the threat Iraq posed.

“I thought they were lying. I didn’t believe them for a moment. I took to the floor,” he said. “I did everything I could to prevent that war. Joe saw it differently.”

In response, Biden declined to engage Sanders directly, focusing instead on his support for withdrawing combat troops during the Obama administration.

The moderators, from CNN and the Des Moines Register, could have pressed Biden to answer directly for Sanders’ criticism, or explain whether withdrawing those troops ended up being a mistake given the rise of the so-called Islamic State, but they did not follow up with him ― and neither did any of the other candidates on the stage.

“Joe and I have a fundamental disagreement here ― in case you haven’t noticed,” Sanders said, eliciting laughter from the audience. “And that is, NAFTA, PNTR with China, other trade agreements ― were written for one reason alone, and that is to increase the profits of large multinational corporations.”

He did not directly answer for his votes for those trade agreements or explain his thinking. And once again, neither the moderators nor the other candidates joined in to press Biden.

Several other controversial elements of Biden’s record did not make it into the debate at all, including his authorship of the 1994 crime bill blamed for the explosion of the carceral state, his role in advocating for a 2005 law making it harder for households to declare bankruptcy, and his past support for cutting Social Security benefits. Even Sanders, whose campaign intimated that the Vermont senator would use the debate to attack Biden for that last stance, declined to engage in that line of questioning.

Sanders, Warren and Klobuchar engaged in a spirited discussion of the potential milestone of the first female president, which was spurred by Warren’s allegation that Sanders had told her privately in 2018 that he thought a woman could not get elected. (Sanders denies saying that.)

But Biden’s comments about gender earlier this month did not come up during the debate.

At a campaign event in Iowa, Biden recalled how Hillary Clinton had suffered sexist attacks during her 2016 presidential run, but said, “That’s not going to happen with me.”

Biden’s campaign told HuffPost that he had not intended to cast doubt on a woman’s ability to win the White House, but he has yet to answer for it personally and the moderators did not ask him about it.

Meghan Markle has been spotted in public for the first time since returning to Canada.

The Duchess of Sussex stopped by the Downtown Eastside Women’s Centre in Vancouver Tuesday to ”discuss issues affecting women in the community” and have some tea, according to a Facebook post by the registered charity.

Kate Gibson, the centre’s acting director, told CBC News that Markle spent more than an hour with frontline staff, and asked about their work and how to improve safety for their clients in the Downtown Eastside.

The centre provides a safe space, resources and advocacy for vulnerable women and children in one of Canada’s lowest-income neighbourhoods. The Downtown Eastside is considered the epicentre of B.C.’s drug overdose crisis, and “as ground zero for violence against Indigenous women and girls.”

Markle is a vocal supporter of the rights of girls and women.

“She just wants to get to know the community,” Gibson told CBC. “We know she’s going to come to Canada and I think possibly the West Coast.”

Markle’s public appearance comes a day after she and Prince Harry received the green light from the Queen to “step down” as senior royals and split their time between Canada and the U.K.

The former actress was photographed by the Daily Mail earlier Tuesday boarding a float plane from Victoria.

The Duke and Duchess of Sussex haven’t disclosed where exactly in Canada they’ll settle down. They spent the holiday season with their son Archie in Canada, and were mostly spotted around parts of Vancouver Island.

Long before she became a duchess, Markle volunteered on a “regular basis” in the kitchen of St. Felix Centre, a non-profit that provides services for some of Toronto’s most marginalized and vulnerable populations. She was living in the city at the time and shooting the TV show “Suits.”

“The duchess also donated food from the set of ‘Suits,’ and on one Thanksgiving she brought in all the food, turkeys and the fixings for over 100 people,” the centre posted on its Instagram last December.

The duke and duchess highlighted the Toronto centre in its holiday spotlight of charities, leading to a flood of interest and support.

Thank you! Many people here have fond memories od #DuchessMeghan volunteering with us -though we remember her just as ‘the lovely Meghan’. We’re happy to see she continues supporting vulnerable people now as a member of the Royal Family
We’d love for her to visit us again one day https://t.co/3b1ObNKawo

More than 10,400 houses and businesses have been plunged into darkness.

Staff at Port Macquarie Koala Hospital have expressed their gratitude to a US primary school classroom for a sweet message mailed to them.