Don’t blame all Victorians for our mess, blame our premier, Neil Mitchell writes.

Rapper Kanye West signaled that he no longer supported US President Donald Trump and said he had entered the presidential race to win it, in an interview published on Wednesday.West, previously a

A man was fined when he was stopped at the NSW Queensland border for allegedly lying on his declaration.

The world’s largest camel treatment and research facility opened in Saudi Arabia’s Qassim Region, SPA reported Monday.The more-than 100 million riyal ($26.7 million) facility is one of only a few in

A teen hid for more than 30 hours in a US forest after a gunman killed his father during an Independence Day trip.

The top US general overseeing operations in the Middle East and Afghanistan has spoken out for the first time about “worrying” intelligence concerning Russian operatives offering bounties to Taliban-linked militants.

On Tuesday night Reynold Poernomo became the first contestant through to the finals of ‘MasterChef Australia: Back To Win’.

It’s a big feat for the reality star who first appeared on the cooking show back in 2015. Since his original ‘MasterChef’ appearance, Reynold has not only expanded his food career, but has become a travel influencer of sorts.

The 26-year-old’s YouTube channel shows fun videos he has filmed with girlfriend Chelia Dinata during their overseas adventures.

One clip from a year ago is the couple’s first VLOG together, taking viewers through their romantic holiday in Bali.

“This is our first time ever vlogging so I wasn’t really sure what to do except show you guys our day while we’re in Bali together,” Reynold captioned the video.

It featured footage of Reynold and Chelia kayaking, enjoying a road trip and of course, eating.

“For breakfast I am craving some yum cha,” Reynold said at one point, as the pair headed to a resort for a delicious meal.

“The thing is it’s a real battle for me now because I eat two thirds…” he said once they sat down to eat, before Chelia added, “You love your dumplings”.

There’s more where that came from, with another VLOG showing the couple exploring Singapore, and one more in which Reynold tries to speak Bahasa, the official language of Indonesia.

On Tuesday night Reynold competed against Callum Hann and Laura Sharrad in the ultimate immunity challenge.

Thanks to his Harry Potter-inspired dessert called ‘The Snitch’, he managed to impress judges Andy Allen, Melissa Leong and Jock Zonfrillo enough to win and become the first person through to the show’s finals. 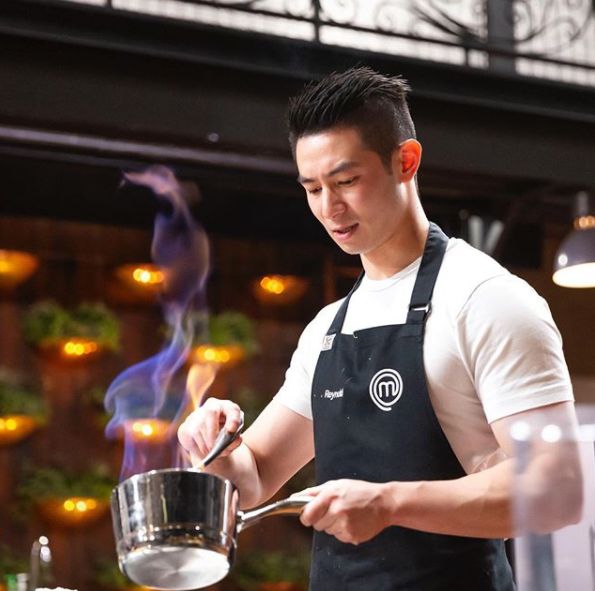 ‘MasterChef Australia: Back To Win’ continues on Sunday at 7:30pm on Channel 10.

Halle Berry said she has decided to pass on playing a transgender man in a new film after her discussion of the potential role sparked controversy.

The “X-Men” and “Monster’s Ball” star is gearing up for the release of “Bruised,” her directorial debut presently slated to hit theaters in September. Speaking to hairstylist Christin Brown on Instagram Live over the weekend, she mentioned her plans to follow up “Bruised” by portraying a transgender man in a forthcoming movie.

Berry didn’t specify the title of the film or name any of its creative team. Though she focused on the artistic challenges the project would present, she misgendered the role several times over the course of the interview.

“She’s a woman that transitioned into a man,” the Oscar winner said. “She’s a character in a project I love and I might be doing.”

Still trying to understand why Halle Berry would be interested in playing the role of a transgender man. Sigh! pic.twitter.com/S7W2y8SMfd

“I want to experience that world, understand that world,” she added. “It’s really important to me to tell stories, and that’s a woman — that’s a female story. It changes to a man, but I want to understand the why and how of that. You know? I want to get into it.”

Criticism of Berry’s announcement ― and, specifically, her misgendering of the character ― was swift.

“Over the weekend I had the opportunity to discuss my consideration of an upcoming role as a transgender man, and I’d like to apologise for those remarks,” she wrote on Twitter. “I vow to be an ally in using my voice to promote better representation on-screen, both in front of and behind the camera.”

“Thank you for hearing us and for taking the time to listen and understand our concerns,” tweeted “911: Lone Star” actor Brian Michael Smith, who is transgender. “Furthermore, I appreciate your vow to take action and use your platform to promote better representation and opportunities for marginalised artists on both sides of the lens.”

The team behind Netflix’s “Disclosure,” a new documentary that traces the portrayal of trans lives on-screen, thanked Berry for “listening and learning.”

In spite of Hollywood’s proclaimed strides toward on-screen diversity, there have been a number of headline-making controversies over the casting of cisgender actors in transgender roles in recent years.

Matt Bomer’s take on a transgender sex worker in 2017’s “Anything” garnered mixed reviews and complaints from trans actors who said they’d auditioned for the part. The following year, Scarlett Johansson sparked outcry when she was cast as a trans crime boss in “Rub & Tug.” A week after her casting was announced, she apologised and exited the role.

A Jetstar flight from Melbourne to Sydney pulled into its gate without NSW Health approval before dozens of passengers began to move into and exit the airport.

Victoria has almost 3,000 cases of coronavirus in the state as millions are just hours away from six-week “stay at home” restrictions.

SEATTLE (AP) — Mary Kay Letourneau, a teacher who married her former sixth-grade student after she was convicted of raping him in a case that drew international headlines, has died. She was 58.Her lawyer David Gehrke told multiple news outlets Le…