A five-year-old boy with $3 in his pocket was pulled over by police in the US, while driving his parent’s car to buy a Lamborghini.

The 34-year-old woman was able to flee the property but turned around when she realised her petdog was missing.

A hospital staff member in Melbourne’s west has tested positive to coronavirus after being exposed to a patient who worked at Cedar Meats.

A Brisbane woman who was jailed for stabbing her husband to death because she was “angry and annoyed” he got home late from work, could be out of jail by Christmas.

Oil prices soared overnight as some European and Asian countries along with several US states began to ease coronavirus lockdown measures.

A 57-year-old man died the scene and two others were injured when attacked by a water buffalo on a farm in south-east Wales.

A man in the US has been charged with assault after allegedly wiping his nose on a shop employee’s shirt.

The national cabinet is analysing “a vast range” of plans detailing how restrictions could be lifted, ahead of a crunch declaration on Friday

New York is figuring out how to get its critical subway network back up and running, while keeping commuters safe from COVID-19.

He’s no “COVID Bryant,” but Grimes and Elon Musk are welcoming a son with a potentially unusual name during pandemic times.

Tesla CEO Musk revealed, in a series of Twitter replies to followers, that his girlfriend Claire Boucher, the Canadian musician also known as Grimes or c, gave birth to a baby boy on May 4.

The world’s initial glimpse of the couple’s first child was a cheeky Instagram filtered photo, followed by a more wholesome image of Musk cradling his kid.

But what people really wanted to know was the baby’s name, the subject of countless jokes for months related to the couple’s eccentrism and love of technology (a few of which came close to Grimes’ own baby name list). Was their son’s name a series of clicks and beeps? Lines of code? An anime franchise? Better yet, an unexpectedly normal name, like “Todd?” Surely not “Influenza,” as unfounded rumours suggested.

Musk tweeted out the baby’s name, but knowing the 48-year-old billionaire’s penchant for being ridiculous, it’s hard to know if we should take it seriously. But if we’re to take him at his word, say hello to X Æ A-12 Musk.

As Grimes has yet to weigh in, it’s not yet known whether she and Musk are actually going to give their baby this idiosyncratic moniker. That didn’t stop Twitter from jumping on the opportunity to poke fun at the very on-brand name.

Watch the video above to hear other hilarious ways Twitter is reacting the the couple’s baby announcement.

With nothing confirmed on Grimes’ side, it’s probably best to take the name with a grain of salt. But for theory lovers, a deep-dive by Inverse points out that each character in the alleged baby name might carry meaning.

X may refer to Musk’s beloved company X.com, an online bank service that later became Paypal. He cryptically responded to Grimes’ pregnancy photos with “X = Y,” a cryptic statement that some now believe was a gender reveal hidden in plain sight; given Grimes previously backed raising their child as gender-neutral, it’s unclear if she’s still pursuing the parenting style.

A tweet by Tesla fan Vivien Hantusch suggests the Æ, which is pronounced similar to “ah”, and A-12 refers to an aircraft also known as “Archangel.” The tweet got attention after Musk himself liked it.

Theory: this is true and the baby will be called Ash (representing the world tree of Norse mythology perhaps?). The song 4ÆM on Grimes’ new album is a coded dedication to their son. 4ÆM = ‘For Ash Musk’

Taking all this into account, the name can technically be pronounced as “X Ah A-12,” or interpreted as “X Ash Archangel.” Maybe just “Ash Musk?” Who knows!

If his name is indeed Ash, it would play into Grimes’ love for Pokémon; she’s shown love to the franchise in since-deleted Tumblr posts, referenced the show by its catch phrase in her 2015 album, and paid homage to the owl Pokémon Rowlet earlier this year.

Going full rabbit hole here: Ash Ketchum is the protagonist’s name in English; in Japanese, his name is Satoshi, which could be a wink to Bitcoin’s mysterious founder, Satoshi Nakamoto. Musk has shared his appreciation for cryptocurrency in the past.

So the Pokémon boy’s name is Ash, nicknamed “Satoshi” pic.twitter.com/ZKO46o6gRS

What’s clear is that his family is very excited to meet him, including Canadian-South African model and Musk’s mom, Maye Musk. The proud grandma doesn’t refer to her grandson by name in a recent tweet congratulating the couple.

⁦@elonmusk⁩ and ⁦@Grimezsz⁩ at the #MetGala2019 One year later, an adorable little boy. Grandma is ecstatic 👵🥳 Can’t wait to meet him🥰🥰 pic.twitter.com/nBz756cfJN

Whatever his name, he arrived just in time for Grimes to become a parent before Mother’s Day. Hopefully Azealia Banks gives him a warm welcome too, but Twitter isn’t betting on it. 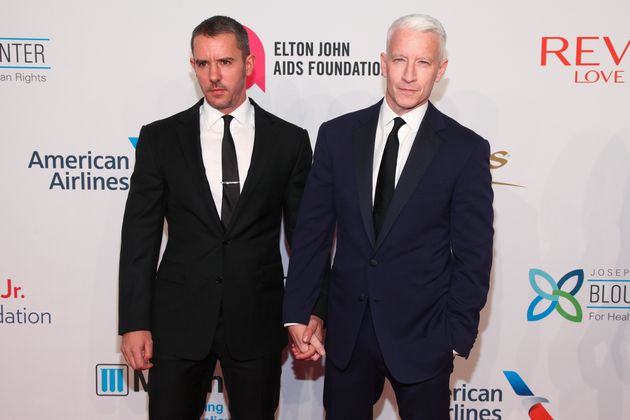 Two years after their split, Anderson Cooper and Benjamin Maisani continue to be a major part of each other’s lives.

Appearing virtually on “The Late Show” with Stephen Colbert this week, Cooper spoke at length about becoming a first-time father with the birth of son Wyatt Morgan on April 27. The experience, the CNN anchor said, was especially poignant since it took place amid the coronavirus pandemic and less than a year after the death of his mother, Gloria Vanderbilt.

Maisani, Cooper said, was present in the delivery room will be Wyatt’s co-parent “even though we’re not together anymore.”

“You know, he’s my family,” he explained. “And I want him to be Wyatt’s family as well.”

Cooper and Maisani, a New York nightclub owner, kept a low profile for much of their nine-year relationship. In July 2017, however, they were photographed at Cooper’s Brazilian vacation home for Architectural Digest, and spoke to Town & Country about their growing art collection.

By March 2018, however, Cooper revealed that the pair had gone their separate ways.

“We are still family to each other, and love each other very much,” he said in a statement to People at the time, adding that he and Maisani “remain the best of friends, and will continue to share much of our lives together.”

Elsewhere in his Monday interview with Colbert, Cooper said his pal Andy Cohen helped convince him the time was right to become a dad.

“He’s been encouraging me all along,” he said. “I figured if he can do it … that sort of gave me the final push.”