Lori Loughlin is reportedly afraid of being behind bars after turning herself in to begin a two-month sentence over the college admissions scandal. “Of course Lori is scared to be in prison but she can’t wait to get this over with,” a source close to her told HollywoodLife. “She hasn’t been …

Activists have turned up to protest outside the gates of Flemington in fury over the death of racehorse Anthony van Dyck after the Melbourne Cup. Melbourne Cup horse Anthony Van Dyck has been euthanised after breaking down around 350 metres from the finish line on Tuesday afternoon.

The Irish stallion, one of the favourites, appeared to suffer a leg injury and was loaded into a horse ambulance on the track. 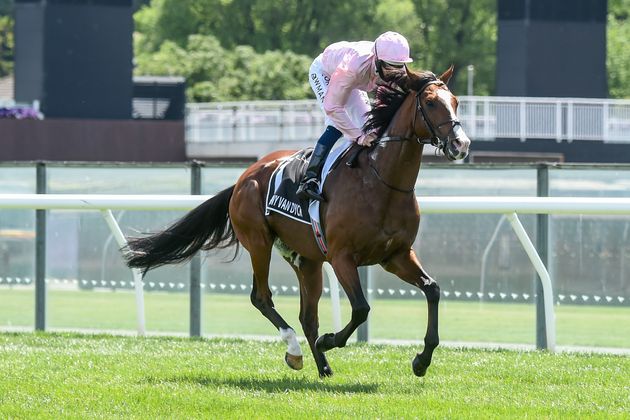 “It is with sadness that we confirm that Anthony Van Dyck had to be humanely euthanised after sustaining a fractured fetlock during the running of the Melbourne Cup at Flemington,” said Stier.

“The horse received immediate veterinary care, however he was unable to be saved due to the nature of the injury sustained.

“Our sympathies are extended to the owners of Anthony Van Dyck, trainer Aidan O’Brien and all his staff who cared for the horse and are greatly saddened by their loss.”

The Victoria Racing Club extends its condolences to the owners, trainer Aidan O’Brien and his team who cared for Anthony Van Dyck and are saddened by their loss.

We would like to thank the track and veterinary staff for their prompt and humane care of the horse.

The Club remains totally committed to the welfare of all equine athletes and the ongoing focus on their wellbeing and will continue to work with the industry to understand the cause of this incident.

The death of Anthony Van Dyck is no “freak accident”. A horse dies *at least* once every 3 days in Australian racing. The risk is known, but deemed to be a risk worth taking in the pursuit of gambling profits.#NuptotheCup#MelbourneCup

Seven racehorses have died since 2013 as a result of the annual event that takes place on the first Tuesday of November.

In 2014, Admire Rakti collapsed and died in his stall after the Melbourne Cup, while in 2017 Regal Monarch was put down after sustaining an injury during the race.

The Coalition for the Protection of Racehorses found 122 horses had died on Aussie tracks in one year, while ‘on average one horse will die on Australian racetracks every three days’.

This year Twilight Payment led from start to finish to claim the $8 million race, beating runner-up Tiger Moth and Prince of Arran in third place.

Donald Trump, just a day before the presidential election, is telling the voters what they want to hear. If he keeps his promises, he may end up firing the nation’s leading expert on infectious disease, Dr. Anthony Fauci. At his rally in Opa-Locka, Florida, Trump was speaking after midnight, complaining to his supporters about the […]

The post Donald Trump Suggests He Might Fire Dr. Fauci After The Election appeared first on The Shade Room. The Friends of Randalls Bay Coastcare group (FORB) will tomorrow (4 Nov) host Julie Collins, MHR, to open the Echo Sugarloaf walking track loop. Since June the group has been quietly working away – as COVID19 restrictions have allowed – to have the track ready for summer traffic. In 2018 they completed Stage 1 of […]

John Legend took the stage with Kamala Harris and husband Doug Emhoff in Philadelphia, PA, on Nov. 2 to campaign for Joe Biden in a final rally ahead of the presidential election. Though the singer blessed attendees and viewers alike with his beautiful…

A Chinese man has been convicted in Florida in a scheme to buy and ship inflatable military boats from the US to China.

Lady Gaga is making one final, powerful plea to voters to cast their ballots for Joe Biden. On the eve of Election Day on Nov. 2, the singer campaigned for the former vice president in Pittsburgh, PA. Before diving into her musical performance, she del…

The Melbourne Cup is known as the race that stops the nation, but in more recent years many have said nup to the cup in support of animal rights.

On Tuesday comedian Dave Hughes was criticised for appearing on Channel 10′s Melbourne Cup coverage live from Flemington Racecourse after saying earlier this year that he was on a “full plant based” diet since November 2019, telling the ABC he’s given up all animal products including eggs and honey.

Many on Twitter expressed their disappointment, with one person writing, “Dave Hughes is a vegan, just not when there is #HorseRacing money involved! #MelbourneCup”.

“Dave Hughes on @Channel10AU or MelbCupDay. I would’ve thought vegans would be opposed to the inhumane treatment horses are subjected to. Not this vegan. #MelbourneFuCup,” penned another.

Dave Hughes on @Channel10AU for MelbCupDay. I would’ve thought vegans would be opposed to the inhumane treatment horses are subjected to. Not this vegan. #MelbourneFuCup#MelbourneFuCup

On Tuesday the comedian, also known as Hughesy, appeared on a panel at Melbourne’s Flemington Racecourse alongside presenters Gorgi Coghlan and Stephen Quartermain.

In his segment he said it was a “pleasure to be here” for a very “different” Melbourne Cup amid the coronavirus pandemic, before also speaking about filming ‘The Masked Singer’ in lockdown a few months ago.

In an interview with the ABC in February, Hughesy said he had been “loving” the “full plant based” diet since starting it in November last year after watching a documentary about veganism on Netflix.

“In the doco, it just made me think about what’s good for my health and so in November I stopped all dairy and I feel really good,” he said.

Hughesy hits the 10 #MelbourneCup panel straight after a tasty win to chat the bizarre season of The Masked Singer this year and chat his love for the Cup! #CupWeekon10pic.twitter.com/Gh6W7pAcyQ