One day after Aaron Carter’s death, older brother Nick Carter performed with the Backstreet Boys during their scheduled London concert. “It was very emotional for me, having my guys with me. That night, it was tough to get up on stage,” Nick, 42, told Extra on Friday, December 2, of the November 6 performance. “There’s the old […]

Things just got even messier… By now, you’ve most likely know that it was revealed this week that the Good Morning America co-anchors T.J. Holmes and Amy Robach seemingly were caught red-handed having a months-long affair while they were still married. The reported timeline of when it exactly started is unknown, but coworkers believe their […]

Following his sold-out show at New York City’s famed Madison Square Garden venue, Nick Cannon was taken to the hospital after feeling under the weather. “OK, so I guess I’m not Superman,” the Masked Singer host, 42, wrote via Instagram on Friday, December 2, sharing a selfie from a local emergency room. “I promised myself I would […] 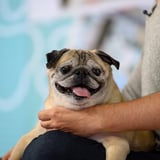 On Saturday, Dec. 3, Noodle the pug‘s owner, Jonathan Graziano, announced his beloved dog passed away on Friday at the age of 14. The pup became famous when Graziano began posting on TikTok their morning ritual where he would gently lift the dog up in the morning to see if Noodle would stand and get out of bed or stay put. If Noodle got up, the day was declared a “Bones Day” – a day of productivity – and if he stayed in bed, it was a “No Bones Day,” or a day to rest and be kind to yourself.

“Hi everyone. I’m so sorry. I’m so sorry to have to share this, but Noodle passed yesterday,” Graziano shared with his dog’s fans in an Instagram video. “He was at home. He was in my arms. And this is incredibly sad. It’s incredibly difficult. It’s a day I always knew was coming, but thought would never arrive, and although this is very sad, I wanted to let you know, and I wanted to encourage you to celebrate him while we’re navigating this sadness.”

Graziano continued, “He lived 14 and a half years, which is about as long as you can hope a dog can. And he made millions of people happy. What a run. Thank you for loving him. Thank you for embracing us. And give your dog a cheese ball tonight, but it has to be the fake stuff.”

The beloved pug’s owner also added a heartfelt caption to his emotional video announcement. “It has been the privilege of my life to care for Noodle these past 7 years,” he wrote. “The sweetest man there has ever been and there will ever be.”

Noodle’s predictions quickly captivated the internet, with some people even letting the pug decide the direction of their day. Earlier this year, Graziano published a children’s book entitled “Noodle and the No Bones Day” that aimed to help children understand the importance of taking time for one’s self. Through it all, Noodle and his charming personality continued to captivate his fans around the world.

Shortly after his passing was announced, other famous pets and their owners began sending their condolences to Graziano and paying tribute to Noodle. Magnus the Therapy Dog’s owner commented on the post, writing, “I’m am so so sorry for your loss 💔.” Meanwhile, Tika the Iggy‘s pet parents wrote, “I’m so so sorry Jon. Noodle was so celebrated and his legacy will live on, thank you for sharing him with all of us. Big hugs. ❤️❤️😓.”

Finally, Noodle’s fellow famous internet pug Doug the Pug tweeted, “RIP Noodle The Pug. A great friend and a pug who spread joy to millions. May it forever be a bones day 🙏.”

“It’s a No-Bones Day!”: Allow Noodle the 13-Year-Old Pug to Make Your Day a Little Brighter

Nothing but a number. Richard Gere may be more than thirty years older than wife Alejandra Silva, but the two are determined to live every day to the fullest with their family. “I was a little lost, without light, and knowing him gave meaning to my life. It was feeling that someone was reaching out […]

It’s her birthday — and she’ll reflect if she wants to! To celebrate her 41st birthday, Britney Spears is opening up on her relationship with her sister, Jamie Lynn Spears, despite their estrangement. “It’s my b-day but you’re my heart so I’m thinking about you,” the “Stronger” songstress, 41, captioned a Friday, December 2, Instagram post dedicated […]

Rosa Linn‘s Snap sounds instantly familiar. One of those songs that you feel like you’ve heard before. This is pop with a big dose of The Lumineers! If you like that vibe, you will really dig this! Check it out above! Then CLICK HERE to listen to more music from Rosa Linn! […]

The post Listen To This: Just Need Time! appeared first on Perez Hilton.

Feeling festive! Jeannie Mai Jenkins’ Spiced Manhattan brings just the kick to any holiday gathering — without an unpleasant hangover the following morning. “My drink of choice used to be an old-fashioned until I realized I had to get up the next day and actually function,” the former Real cohost, 43, reveals in the latest issue of Us […]

The best tote bags for moms are versatile workhorses that can easily store all the mom must-haves — and they look stylish doing it.

Piovanotto Marco/ABACA/Shutterstock Is there a new reboot on the way? Bella Thorne would love to see her former Disney channel show, Shake It Up, return to the small screen — with a twist. “I think an older Shake It Up would be hilarious,” the former child star, 25, exclusively reveals in the latest issue of […]

Piovanotto Marco/ABACA/Shutterstock Is there a new reboot on the way? Bella Thorne would love to see her former Disney channel show, Shake It Up, return to the small screen — with a twist. “I think an older Shake It Up would be hilarious,” the former child star, 25, exclusively reveals in the latest issue of […]