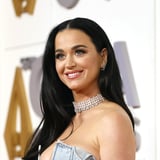 In hindsight, Katy Perry really wishes she hadn’t written a young Billie Eilish off as “just a blonde girl.” On Friday, 102.7 KIIS FM shared a TikTok of Perry seemingly at an intimate concert recounting a story to her fans about how she had a chance to work with the 21-year-old Grammy winner before she was famous. The “Fireworks” singer ultimately passed, which is a mistake she regrets so much she had to quote “Pretty Woman.”

“She sent me an email one time that was: ‘Hey, check out this new artist. I’d really like us to work with her because she was working with me for Unsub [Records],” Perry said of an unknown person she was working with at the time. “It was a song called ‘Ocean Eyes,’ and it was just a blonde girl. And I was like, ‘Meh, boring.'”

Perry then widened her eyes and dropped the most famous line from Julia Roberts’s “Pretty Woman”: “Big mistake. Huge mistake.” She went on to add, “Don’t let this hit the internet.”

The clip did hit the internet, but it’s all good. Even though Perry passed on working with Eilish when she heard the then-14-year-old’s early song “Ocean Eyes,” the two have since gone on to become friends. Their first meeting was captured on film in the documentary “Billie Eilish: The World’s a Little Blurry.” At the time, Perry congratulated the “Bad Guy” singer on her success and offered to give her advice on navigating the business as a young person.

In the doc, Perry also introduced Eilish to her then-fiancé, Orlando Bloom – but the young singer didn’t immediately recognize the actor. However, when her brother, Finneas, told her Bloom was Will Turner in the Pirates of the Caribbean movies, she immediately wanted a do-over of their meeting. “That guy?! That was him?!” she said. “No way! Bring him back. I want to meet him again. He kissed me on the cheek. I did not know that was him. I thought that was just some dude Katy Perry met.”

Teenage Dream: Katy Perry Reveals the Advice She’d Give to Her “Boy Crazy” Younger Self

Happily, Bloom obliged, and Eilish received a hug from him before going on stage – which means she recognized her Hollywood mistake way before Perry did.

Jane Fonda’s starring turn in 1968’s Barbarella helped catapult her to worldwide acclaim — but she’s not thinking about passing the mantle onto Sydney Sweeney, who is set to lead the upcoming remake. “I try not to because I worry about what it’s going to be,” Fonda, 85, told The Hollywood Reporter in an interview published on Friday, January […]

TikTok’s favorite couple! Allison Kuch and Isaac Rochell have taken the internet by storm with hilarious hijinks and their sweet love story. The twosome met while attending the University of Notre Dame and started dating in late 2014. After the Georgia native was done with collegiate football, he was drafted by the Los Angeles Chargers. […]

While Sarah Michelle Gellar and Freddie Prinze Jr. have been together for more than 20 years, it all nearly fell apart over movie spoilers. “We’re about 20 minutes into [The Sixth Sense] and I said something, just like it popped up [in my head], like, ‘Is that [this actor]?” the Buffy the Vampire Slayer alum, 45, said […]

Amy Robach and Andrew Shue are trying to mend the fences for the sake of their kids! According to Us Weekly on Friday, the former couple has been focused on their family and maintaining the peace between them following her affair with her (now) former GMA3 co-anchor T.J. Holmes. A source explained to the outlet: […]

The post Amy Robach & Andrew Shue Are Trying To ‘Be Amicable’ After T.J. Holmes Affair! appeared first on Perez Hilton.

Not ready for another sibling? While Claire Danes and husband Hugh Dancy are excited to welcome another child into their family, their elder sons had a different opinion. “[Our oldest] Cyrus was sort of resigned to it. I mean, the worst has already happened, his name is Rowan,” Danes, 43, said during a Friday, January […]

Working his way up! Stephen Huszar made his Hallmark Channel debut as a minor character in 2011’s Time After Time — but he is now a leading man. In 2017, the rom-com star appeared in his first holiday film for the network with Magical Christmas Ornaments. One year later, he came back for his second […]

Fritz Hager left American Idol a fully formed artist! He’s released new music that feels tailored to him! Organic. Not manufactured. There’s something very special about him! True talent. Talents, plural! Caroline is indie pop greatness! This is just so cool in a very casual way! Check it out above! Then CLICK HERE to listen to […]

The post Listen To This: From The Bed To Your Front Door! appeared first on Perez Hilton.

A love story for the ages. Candace Cameron Bure and Valeri Bure have set an example with their long-lasting marriage. The If I Only Had Christmas actress and Winter Olympics medalist were originally set up by her Full House costar Dave Coulier. “[Lori Loughlin and I] were looking at these two cute men on the […]

Switching it up! Former Bachelorette Hannah Brown opened up her BA&SH Zebra handbag exclusively to Us Weekly — and revealed what’s hidden inside. “It’s a French brand and they have some really cute stuff,” the 28-year-old star told Us of the animal-print purse, which Brown carried with her during a recent getaway. “I was in Nashville […]

Matt Baron/BEI/Shutterstock Hey Wisconsin, Kitty Forman is back! Debra Jo Rupp returned as the sitcom mom everyone knows and loves, but she told Us Weekly what fans might not know about her real life. The Wandavision actress, 71, starred in all eight seasons of That ’70s Show from 1998 to 2006. Now, she and Kurtwood […]

The best diaper bags for breastfeeding moms have easy-access pockets and are comfortable to carry.