Netflix has a high turnover rate for its movie library. Some movies, like the “Lord of the Rings” trilogy, seem to be caught in an endless cycle of leaving and returning to the service. (The second and third “LOTR” films are cur…

Oprah Winfrey supports Meghan Markle and Prince Harry’s decision to step back from the royal family “1000%,” she said in a video captured by TMZ cameras.

The media mogul, who attended their royal wedding, is friends with the couple and currently working on a mental health TV series with Harry. She spoke about the duke and duchess’s decision on Tuesday night.

She said that the prince “did what he needed to do for his family” and “thought about it for months” in the candid clip, which also featured her best friend and TV host Gayle King.

King is also very friendly with the royal couple, as she attended Meghan’s baby shower last year (and also was present at the royal wedding, though she covered it as a reporter). 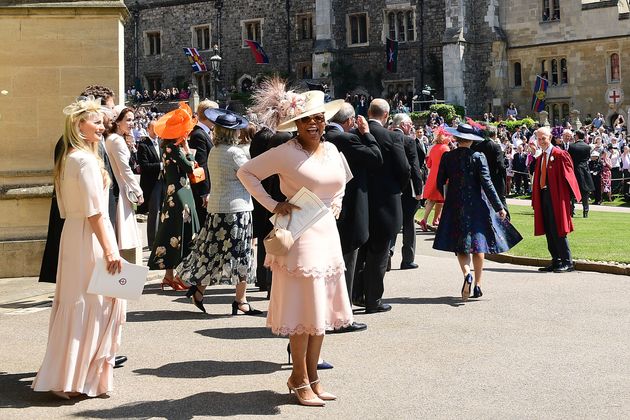 “I support them 1000%. I support them because I believe that when you have thought about this as long as they have, and even in the queen’s statement ― everyone take note ― where the queen says, this has been going on for months,” Oprah told TMZ.

“What Harry said in that ﻿charity statement [for the charity Sentebale] the other day … the last line of his statement where he said that had to make the decision to back away from his family in order to move forward in peace with his new family, I don’t know how they came up with those words, but who doesn’t feel that?” she added.

“Who doesn’t feel what that takes to make that decision, to give up everything you’ve known in your whole life, to say, ‘I am going to choose this new life and what I believe to be the truest vision for myself?’” she continued. 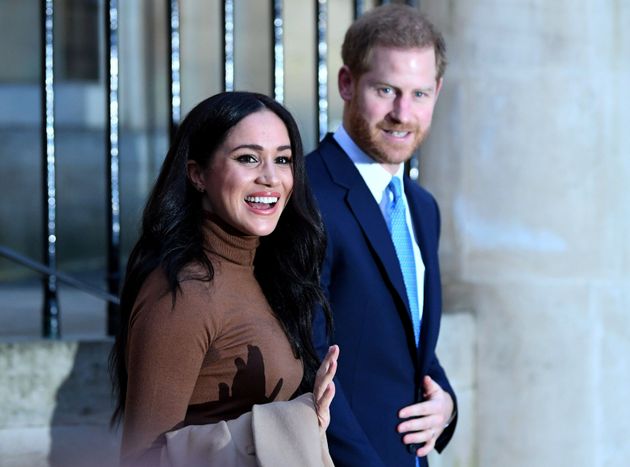 Both Oprah and King denied that Harry made the decision without speaking to the royal family of some time.

“But they didn’t make the decision in a vacuum. There were a lot of conversations,” King said, adding that it “wasn’t fair” to say that the royal family was “blindsided” when they’ve known this was a possibility for several months.

Oprah chimed in, adding that “Everybody’s known for months that this was happening.” 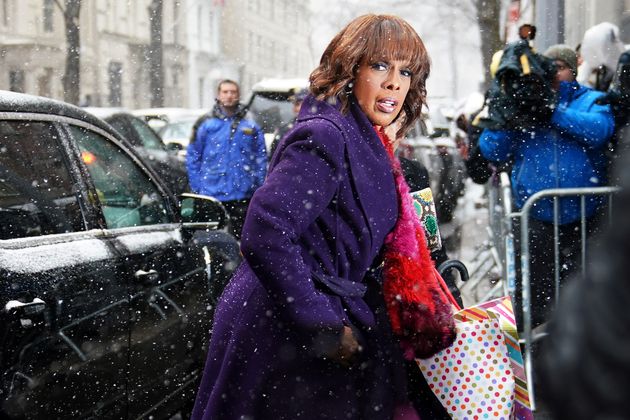 After Meghan and Harry announced two weeks ago that they were stepping back, early reports suggested that Oprah and the Obamas were advising the royal couple, which the media mogul that later denied.

“Meghan and Harry do not need my help figuring out what’s best for them,” Winfrey told People. “I care about them both and support whatever decisions they make for their family.”

Now we just have to sit back and wait for the tell-all interview.

Prime Minister Scott Morrison says he will await the outcome of an investigation into a sports rorts scandal involving Nationals deputy leader Bridget McKenzie before taking any action.

Eight students from Adelaide’s Scotch College have been rushed to hospital after the bus they were travelling in rolled near the South Australian and Victorian border on Wednesday afternoon.

A mother accused of leaving her baby in a hot car while she played the pokies has appeared in a Melbourne court.

The ‘wet’ market identified as the epicentre of China’s deadly coronavirus outbreak sold a range of exotic animals for human consumption, including snakes, foxes, wolf cubs and snakes.

With more cameras than cars filling the Manhattan street, this feels like a moment in history. 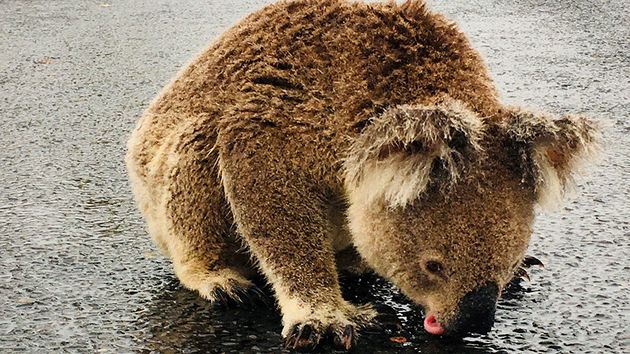 One of the two koala water drinking stations installed at New South Wales’ Crowdy Bay National Park was stolen this week, in what has been described as a “terrible” incident that police are investigating.

Port Macquarie Koala Hospital, the facility responsible for distributing these water stations to the national park 271 km northeast of Sydney, was informed of the theft on Monday.

“Isn’t it terrible? We put this water station in to help wildlife and some scumbag’s come and stole it,” the hospital’s Sue Ashton, who also serves as Koala Conservation Australia president, told HuffPost Australia.

“I can’t believe it. Here we are going out into the burnt bushland and in Crowdy Bay National Park it’s really badly burnt, so there’s no vegetation growing back, it’s ash black.”

On Wednesday morning the koala hospital was informed that the $1,450 vessel had been returned to the same spot overnight but was damaged, prompting authorities to continue inquiries.

“An investigation was launched however overnight, the station has been returned to the location. Inquiries are continuing, anyone with information is urged to contact Crime Stoppers on 1800 333 000.”

Ashton has urged the public to come forward with any information they may have about the theft, suggesting “somebody must have seen it”.

“The things are so heavy, you need a minimum of two strong men to carry them, probably three. You need a trailer to put it on because they’re about two-and-a-half metres tall and they are really heavy,” she explained.

The damaged metal work and broken hoses will now require a staff member from Port Macquarie to travel an hour to Crowdy Bay National Park to repair the station.

Port Macquarie Hospital’s ‘Help Thirsty Koalas’ GoFundMe page has raised over $7 million that has been used to source these water drinking stations.

“Originally we were going to build 12,” explained Ashton. “From the money we got we increased that to 100, and we think now we’ll do even more because the need is there.”

Five water stations were recently provided to the Blue Mountains region where the Science for Wildlife organisation has been monitoring koalas who have survived bushfires in the area.

According to Dr Kellie Leigh, Executive Director of Science for Wildlife, the need for wildlife water drinking stations is important because “dehydration is a big threat” to koalas this bushfire season.

“On top of the fires, we’ve had this ongoing record-breaking drought and it was only a few weeks ago we broke the heat records as well,” she told HuffPost Australia. “So heat stress and then poor quality habitats means that they’re more likely to drink water.

“Koalas don’t normally drink, they get their moisture out of the leaves, but these habitats now are so dry from the drought and then we get these heat stress days which put more pressure on, so dehydration is a big threat.” 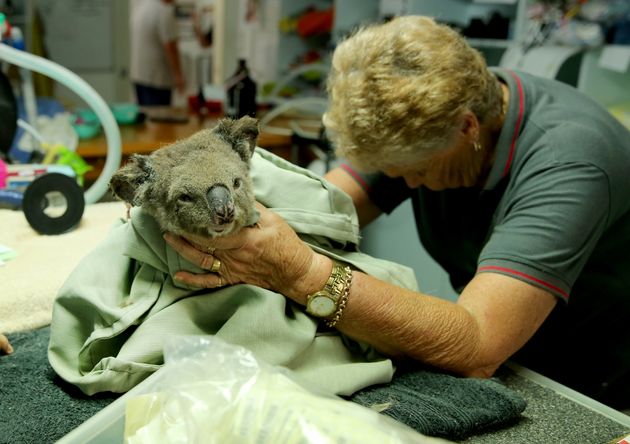 The benefit of drinking stations being installed up in trees is protecting wildlife from predatory species on the ground as well as dangerous conditions.

“You don’t want things like koalas and gliders having to come to ground to get water because then they’re susceptible to foxes and cats,” explained Dr Leigh.

“One of the big concerns is feral or pest species are now a much bigger threat. These fires have taken out all the understory and so for small mammals and anything coming to ground, they’re much more exposed and vulnerable to predation. So that’s why we want to put as many drinkers up.”

Animals such as wallabies and wombats on the other hand benefit from lower drinking stations “protected by grills” that are “fed the same way” according to Port Macquarie’s Ashton.

Earlier this month the RSCPA warned it was “dangerous” for koala rescuers to give the animals water via a drink bottle.

“It can be dangerous to give koalas water poured into their mouth as they are not usually used to drinking, and a volume such as 10-20 mls can be ‘aspirated’, which means the water goes into the lungs instead of the oesophagus,” a RSPCA South Australia spokesperson told 7NEWS, adding, “an animal can die from aspirating fluid”.

The heat from the ancient volcanic eruption of Mount Vesuvius in Italy was so hot that it turned one victim’s brains to glass.