New Mexico fire authorities have given a stern warning to a 9-month-old puppy after he accidentally lit a fire in his owner’s home and nonchalantly watched as the flames grew.Kahuna, who lives in Los Alamos County, was poking around a corner of h…

A Melbourne bar has apologised “unreservedly” for insensitive marketing of its Chinese New Year special.

Listening bugs planted in the investigation into missing William Tyrrell caught a widower telling his dead wife not to ‘tell anyone’, a Sydney court has heard.

A British man who has been providing video updates on social media of his time on the quarantined Diamond Princess has urged concerned loved ones of passengers to get in touch so he can make sure they’re alright.

One student is in hospital in a serious condition with an injury to their abdomen.

A Melbourne nightclub has apologised after the promotional material for an event this coming Friday sparked a wave of backlash for being “racist” in the wake of the coronavirus outbreak.

Pawn & Co, located in suburb Prahran which is approximately 5 kilometres south-east of Melbourne’s city centre, was set to be the location of an event advertised as a “Corona Chinese New Year Special”.

Marketing material issued by the event’s promoter, Mr Chan’s, told customers that they could pay $8 for a “Limited Edition Face Mask” and Corona-branded beer. 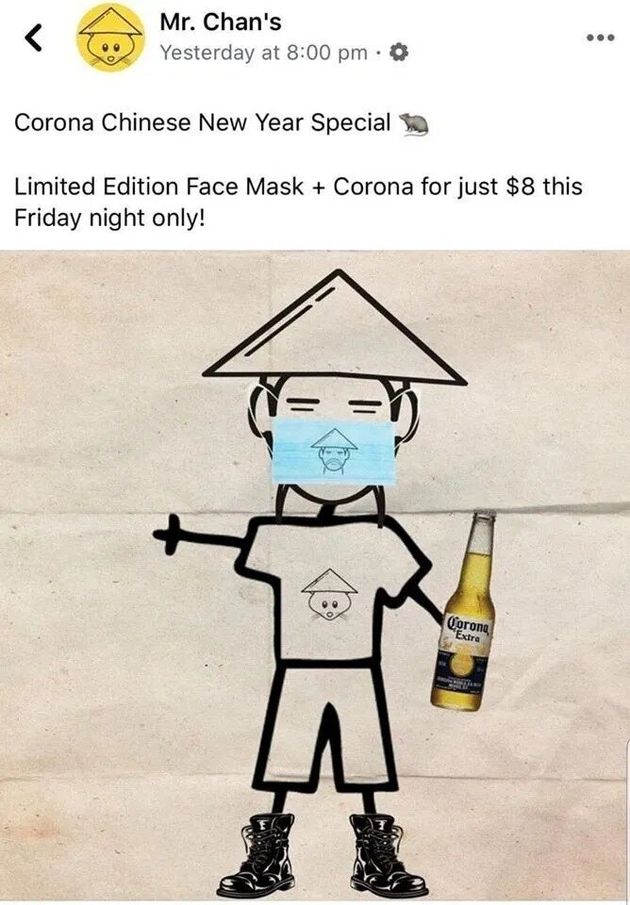 In a statement released by Pawn & Co on Wednesday, the nightclub said its team members “unreservedly apologise for the insensitive and inappropriate marketing that has been circulated from Mr Chan’s”.

“While it is an external promotional company that owns the Mr Chan’s brand, we acknowledge that we should have been more active in understanding the communication being marketed and how it might be perceived,” the company stated. 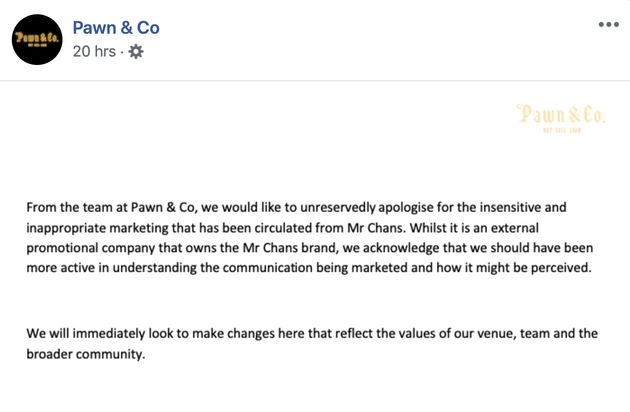 The Asian Australian Alliance’s founder Erin Chew said she was “disappointed” when she first saw the event’s promo material come across her Facebook feed.

“I felt disappointed that in 2020, these negative racial tropes are still being used insensitively as well as for laughs,” Chew old HuffPost Australia.

Having founded the Asian Australian Alliance, an organisation with over 900 members that promotes advocacy on social issues faced by Asian-Australians, Chew explained that timing only made this situation worse.

“Particularly in this current environment where Chinese and Asian Australians are being accused of having the coronavirus and/or eating everything, using this brand to make profit at this time shows that clubs like Pawn & Co didn’t think about the racial backlash, nor did they think about how offensive this brand is to Chinese and Asians everywhere,” she said.

Chew acknowledged the nightclub’s apology and efforts to remove the offensive imagery from their social media accounts, and said “this is a teachable moment” for such companies.

Following Pawn & Co’s apology, the promoter Mr Chan’s is yet to issue a public statement.

Its official Instagram account appears to have been turned to private mode in the wake of the backlash, and the promoter did not immediately respond to HuffPost’s request for comment.

Chew explained that the promoter’s name even had racial undertones, and called for the brand to be “shut down” altogether.

“The racial trope of ‘Mr Chan’ stems from the insidious history of how Hollywood tried to not only emasculate but also present Chinese/Asians on screen as villain,” she explained.

“Now it is about working on ensuring that this brand is shut down and not used at a different venue/club and that onus is on the promoters/owners of this brand. Remember this is not the 1920s, but it is 2020, we in Australia should do better.”

Australia has 14 confirmed cases of coronavirus with those infected having been ordered to “self-isolate” for 14 days.

The second group of Australian citizens and permanent residents was evacuated out of the coronavirus epicentre in Wuhan, China, and arrived on Christmas Island on Thursday morning. They will have to stay in quarantine for 14 days.

The majority of coronavirus cases, which have resulted in at least 170 deaths, have been in China where health officials say the virus originated. Additional cases have been reported in 18 other countries, including the US, France, Canada, Japan, South Korea, Thailand, India and Australia. 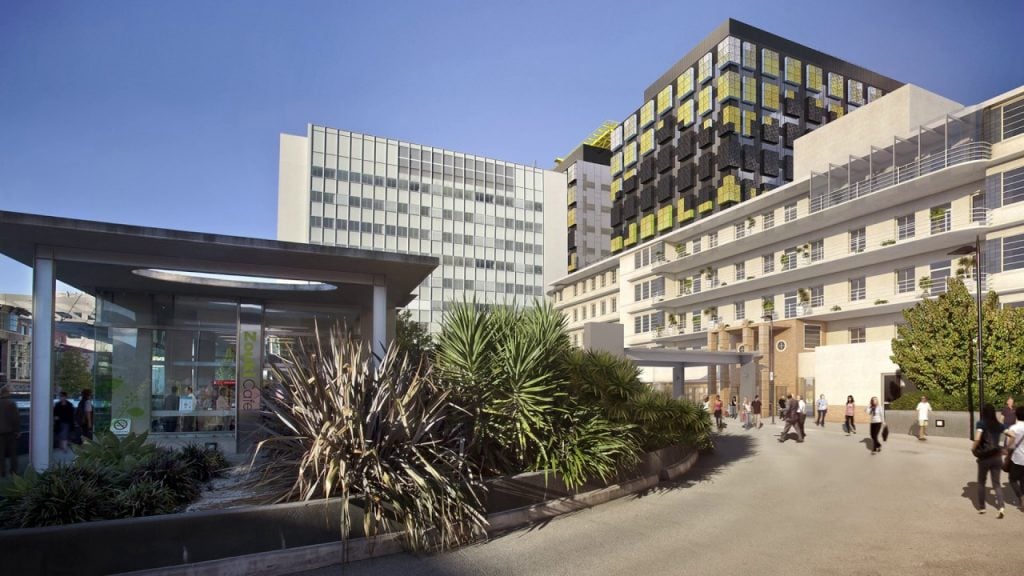 Testing by union members has found lead in drinking water at the new K-Block at the Royal Hobart Hospital. Workers have themselves been drinking the water for months, tested as having three times the legally-allowed lead content. The revelations mean the ward will likely not be available for use by patients until the issue is […]

Woolworths has become the third supermarket in two months to announce a nationwide recall of pesto due to fears the product may contain peanuts.