US police officers at a Florida primary school arrested an 8-year-old boy after he allegedly hit a teacher.

US police officers at a Florida primary school arrested an 8-year-old boy who had allegedly hit a teacher, only to realise the boy's wrists were too small for the handcuffs.

Part of the Key West police bodycam video of the December 2018 arrest was released on Monday by civil rights attorney Ben Crump, who is representing the boy's mother.

On Tuesday she filed a federal lawsuit, claiming the officers used excessive force, the school officials failed to intervene, and the city and school district violated the Americans with Disabilities Act. 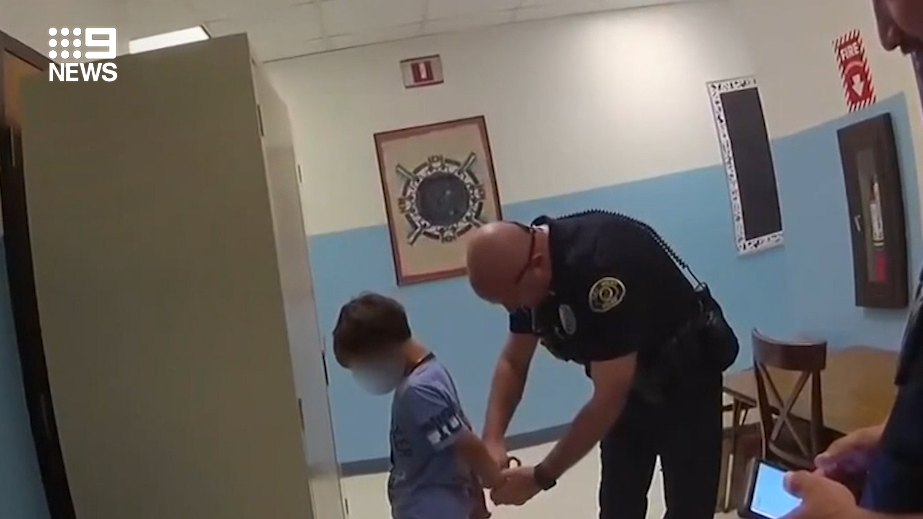 The lawsuit says the boy has special needs.

"This is a heartbreaking example of how our educational and policing systems train children to be criminals by treating them like criminals - if convicted, the child in this case would have been a convicted felon at eight years old," Mr Crump said in a statement.

"This little boy was failed by everyone who played a part in this horrific incident."

But in a statement to the Miami Herald on Monday, Key West Police Chief Sean Brandenburg said his officers did nothing wrong and they followed standard operating procedures.

The boys' mother Bianca Digennaro, said in a Zoom press conference yesterday, her son was arrested, taken to jail, finger-printed, DNA-swabbed and had his mugshot taken that day.

The boy, who was 106cm tall and weighed 29kg, was charged with felony battery, Mr Crump said.

His mother fought the case in court for nine months until a prosecutor dismissed the charges.

Mr Jacob said the chief's comment that this was a standard arrest was precisely the issue.

READ:  'There is nothing': Labor unhappy about Aussies excluded from Budget 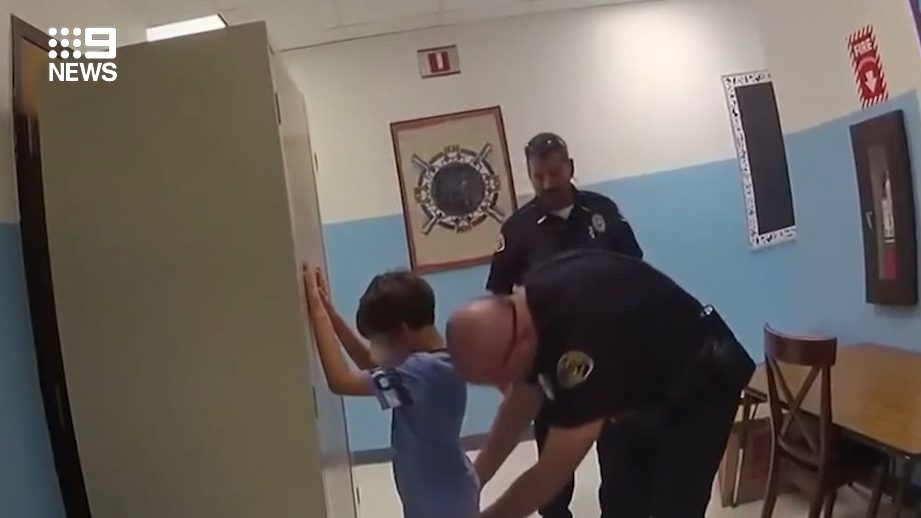 "That is the problem. That is why we have this lawsuit. This is gonna come to an end with this litigation," Mr Jacob said.

Monroe County chief assistant state attorney Val Winter said in an email a mental health evaluation was conducted on the boy, in conjunction with his attorney, and determined it was in the child's best interest to dismiss the charges, based on the boy's age and mental evaluation.

The case was dismissed once the office received confirmation of services based on the doctor's report, Mr Winter said.

Monroe County School District declined to comment. The primary school did not respond to a request for comment.

The teacher was not able to be reached.

What did the police report and video show?

Police moved to arrest the boy after he allegedly hit a teacher, who was uninjured, according to a Key West Police report.

Mr Crump identified the teacher as a substitute.

The teacher was supervising a class in the lunch room and said the student was not sitting properly on the bench seat, the report states.

He refused, and she got up and walked over to him, according to the police report.

She told police the student told her "don't put your hands on me" as she approached him. 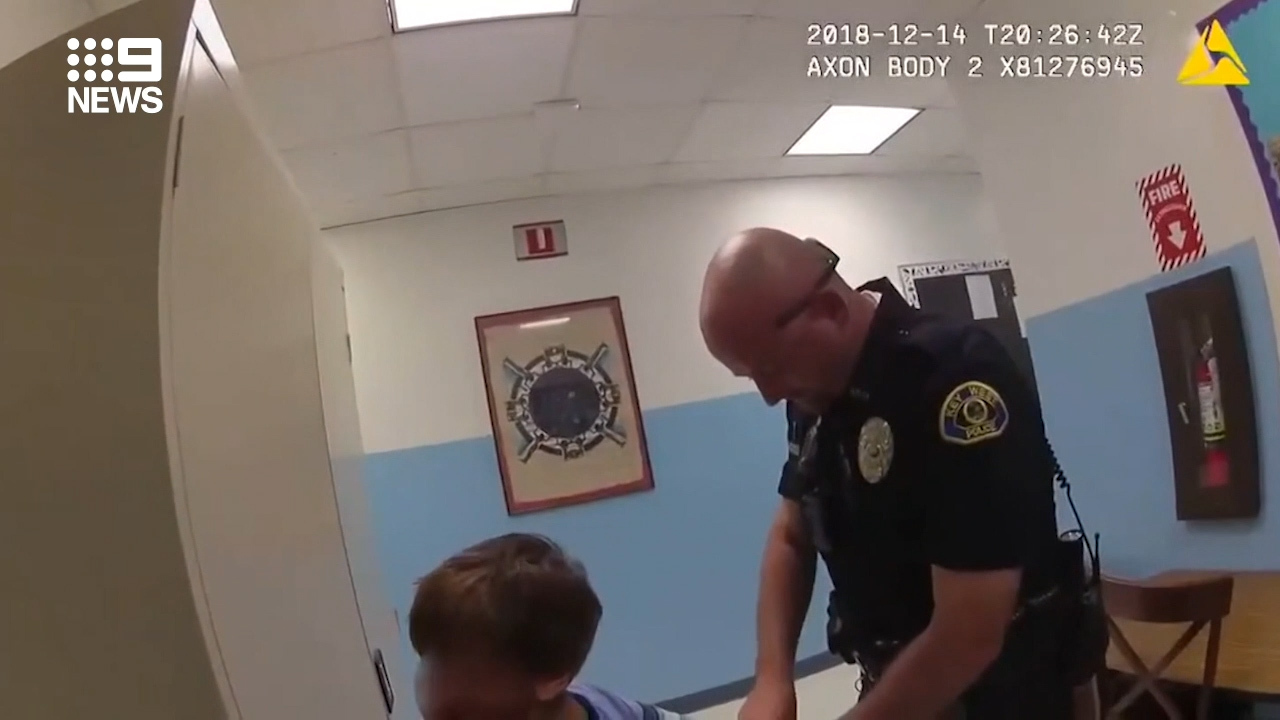 The student allegedly began to curse at her, told her "my mom is going to beat your ass," and then punched her in the chest with his right hand, the teacher said in the report.

An officer observed the boy's hands clenched into fists and "he was postured as if he was ready to fight."

The teacher did not sustain any "obvious injuries" from the punch.

The portion of the police bodycam footage, provided by Mr Crump, begins afterwards as three officers move to arrest the boy, who is sitting and crying.

"Son, you know where you're going? You're going to jail," one officer says.

The officer asks him to put his hands up against a cabinet and then pats the boy down, the video shows.

The officer then asks the boy to put his hands behind his back and he complies.

The officer tries to put handcuffs on the boy, but quickly realises the cuffs will not fit his wrists.

"Your hands are too small," the officer says.

The officers instead ask him to hold his hands in front of himself, the video shows, and they then appear to walk him towards a police vehicle, but the video ends before they reach the vehicle.

"You understand this is very serious, OK?" a different officer says.

"I hate that you put me in this position that I have to do this. OK? Alright? The thing about it is you made a mistake, now it's time to learn from it and grow from it, right? Not repeat the same mistake again, OK?"

Key West Police said they are not releasing the full bodycam video because the person is a juvenile.

Ms Digennaro said her son has been diagnosed with ADHD, oppositional defiant disorder, depression and anxiety, and he was taking medication for them.

When he starts to have an episode, as she says occurred in this incident, he becomes sensitive to anyone touching him, she said.

In February 2018, the school district conducted an evaluation on the boy and classified him as having an "emotional or behavioural disability," according to the lawsuit.

READ:  The 10 Airbnbs We'd Want To Stay In If We Could Right Now

The school district also developed an Individualised Education Program tailored to his needs, the lawsuit states. 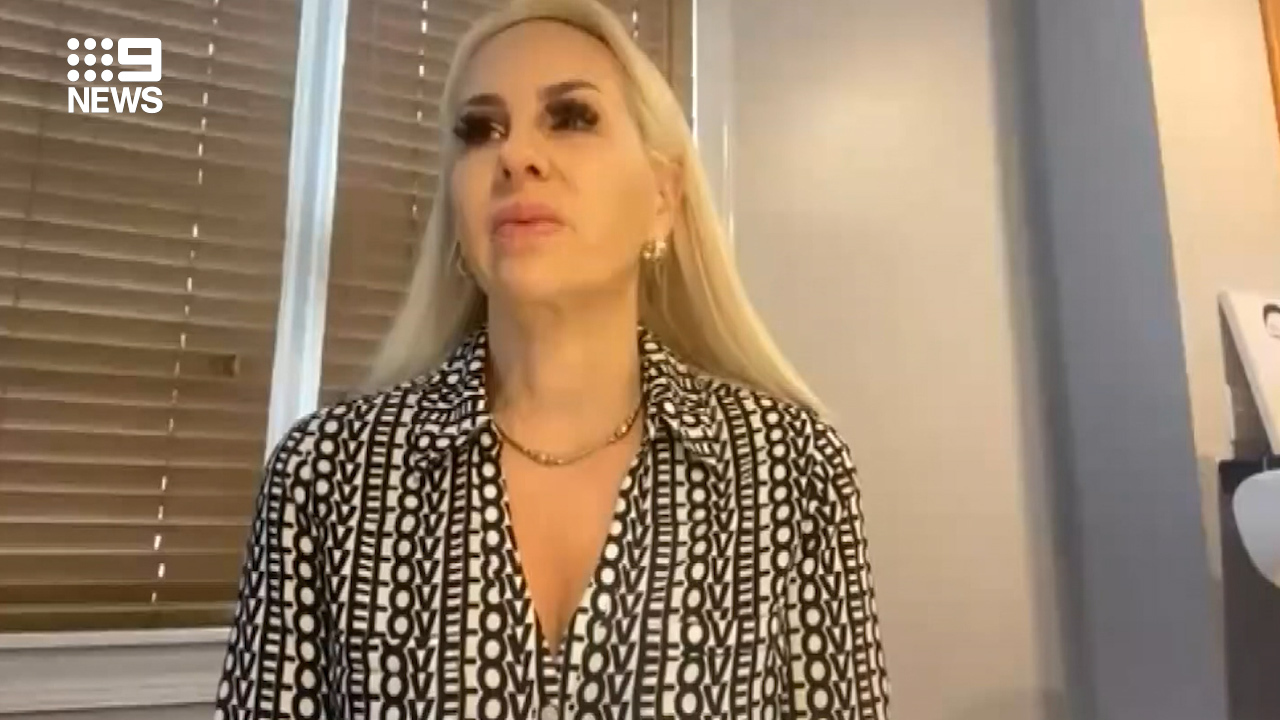 In a statement, Mr Crump said the teacher had no awareness or concern about those needs and escalated the situation.

The police report does not indicate he had special needs, and it is unclear whether the teacher or police officers were aware of his disabilities.

According to the police report, the school contacted the boy's parents before arresting him.

The lawsuit indicates the student's mother was out of town and the father came to the school before the boy was placed into custody.

Mr Jacob, the family's attorney, criticised the actions of police involved in the incident.

"As a former police officer, I am appalled by the conduct of these officers," he said.

"Their actions and treatment of this young boy, aside from being inappropriate, deviate from widely accepted police procedures regarding the treatment of minors and disabled persons."

Mr Crump, who also represents George Floyd's family, said the boy is biracial, with an Italian mother and an African-American father.

"We are trying to fight for Bianca Digennaro's little boy but (also) for other marginalised little children who the system will try to put on the school-to-prison pipeline even before they reach their teens," he said.

Ms Digennaro said her son, now 10, is doing better but the incident was traumatic.

"I'm heartbroken this happened to my son," she said.

"I'm just here for my son because I refuse to let them make him a criminal or convicted felon at the age of 8."