U.S. President Donald Trump’s announcement that he and first lady Melania Trump tested positive for the coronavirus dominated global news, shook financial markets and spurred an outpouring of commentary from world leaders and others. The com…

U.S. President Donald Trump’s announcement that he and first lady Melania Trump tested positive for the coronavirus dominated global news, shook financial markets and spurred an outpouring of commentary from world leaders and others. The common theme: The U.S. is a mess.

That the president has fallen ill with the virus is a sharp reminder that it continues to spread rapidly in the U.S., which already has the world’s highest number of infections and deaths.

Officials abroad extended sympathy to the president. But across the world, it was tempting for people to contrast their country’s response to the pandemic with Trump’s in the U.S.

Trump potentially exposed dozens of people to the disease by attending the first presidential debate on Tuesday, where he and his entourage mostly eschewed the basic protective measure of wearing masks. On Wednesday, he attended a campaign rally. Thursday, even after learning that close aide Hope Hicks was infected, he attended a private fundraiser. His campaign did not inform Biden’s team they may have been exposed to the virus, according to PBS.

Yuriko Koike, the governor of Tokyo, said Trump’s diagnosis reminded her “of how widely masks are worn in Japan,” The Associated Press reported. Japan, with a population of 126 million, has lost 1,580 citizens to COVID-19. The U.S., with a population 2.5 times larger, has recorded 207,000 deaths.

Other observers were less restrained. The Australian satire website the Betoota Advocate posted a story claiming the Trump family had caused greater community transmission than the entire population of the Australian state of Queensland, AP noted.

If Trump’s condition worsens, it could lead to global chaos and disengagement from the U.S., one expert predicted.

“There are a lot of concerns around the world at the moment … foreign leaders have to be worried about the capacity of our commander-in-chief and whether he would cede control to Mike Pence if he is unable to govern,” Brett Bruen, the director for global engagement at the White House from 2013 to 2015, told HuffPost.

The news comes amid multiple international crises that Washington is doing little to address, Bruen noted, including the escalating conflict between Armenia and Azerbaijan, and concerns in Europe over Russian President Vladimir Putin’s suspected role in poisoning a top political opponent and shoring up a dictator in Belarus. It also makes it harder for those responsible for explaining America to the world and sustaining its foreign relations, already contending with a collapse in the country’s global reputation because of the coronavirus catastrophe and international anxiety over Trump’s attacks on the integrity of the November election.

“American diplomats will try and project calm. They are bound to emphasize that our institutions and laws remain strong,” Bruen said. “Yet this comes after an embarrassing performance by President Trump during the debate, which has raised further questions as to the state and strength of our democracy.”

Gina Abercrombie-Winstanley, a former ambassador who served in the foreign service for 30 years, said U.S. representatives could use the opportunity to note the contagiousness of the coronavirus and the importance of remaining vigilant until a vaccine is distributed.

“I’d expect our diplomats to add something along the lines of, ‘We’ve seen highly responsible behavior and highly irresponsible behavior around the world. He isn’t the first leader to get the virus and he likely won’t be the last ... Once the president recovers fully, hopefully he’ll make these points — and his own experience will add resonance to his words,’” Abercrombie-Winstanley continued.

But there were already indications that Trump’s diagnosis could actually make his administration’s coronavirus response worse. On “Fox & Friends,” a television show the president frequently promotes, co-host Brian Kilmeade said a Trump recovery from the virus could send a message that “you can say whatever you want with stats and graphs,” but perhaps it’s less serious than thought. 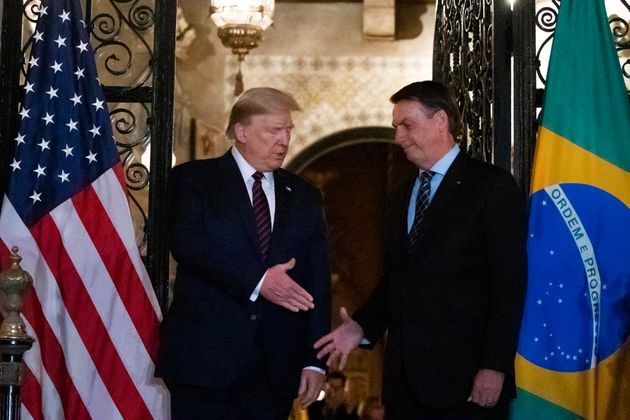 Brazilian President Jair Bolsonaro, who shares many of Trump’s nativist and quasi-authoritarian qualities, successfully battled the virus over the summer. He has since doubled down on skepticism of measures to control what he calls “a small flu,” saying no Brazilians would be required to be vaccinated against it.

Should Trump and his allies keep downplaying the coronavirus to make him appear strong and distract from the pandemic’s sweeping effects on the U.S., they would be adding to the torrent of disinformation and confusion that’s already had deadly consequences for Americans, including those who fell ill after taking risky, unproven treatments on Trump’s recommendation.

National security officials warned that U.S. adversaries like Iran and North Korea could try to tap that doubt and disorientation to influence Americans in the sensitive pre-election period, further polarizing the country the way Russian interference did in 2016.

“Our enemies will see us in a vulnerable state,” former CIA officer Marc Polymeropoulos told Politico.

Analysts can track and attempt to counter those messages. But it’s particularly hard for them to deny reports that contain a kernel of truth, often the crucial element in luring readers and viewers down rabbit-holes of untrue or manipulated information.

“The coronavirus continues to spread, even as Trump has tried desperately to suggest it no longer poses a danger,” the state-run Chinese outlet China Daily tweeted.