Oops. White House Press Secretary Kayleigh McEnany on Friday inadvertently revealed President Donald Trump’s banking details to a massive audience as she showed off a check he had written.Trump’s bank account and routing number were visible… 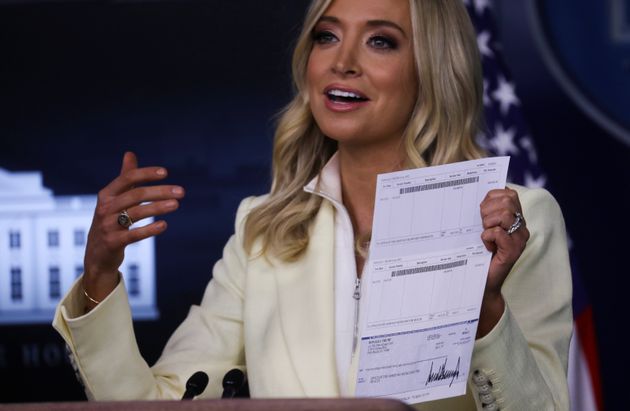 Oops. White House Press Secretary Kayleigh McEnany on Friday inadvertently revealed President Donald Trump’s banking details to a massive audience as she showed off a check he had written.

Trump’s bank account and routing number were visible on the paperwork McEnany displayed to the media at a press briefing, The New York Times noticed.

The information could typically be exploited to hack into an account. But the president’s account would likely have high-level protections to ward off theft.

The $100,000 check signed by Trump and written on a Capital One account, which looked like the real thing, had bank details attached. It was made out to the Department of Health and Human Services to help “support the efforts being undertaken to confront, contain and combat the coronavirus,” McEnany explained at the press conference.

It was part of Trump’s vow to contribute his $400,000 annual salary as president. He makes out a check quarterly. His last quarterly check was also to HHS. A copy of that check alone — without the accompanying paperwork McEnany revealed Friday — was tweeted back in March.

President @realDonaldTrump made a commitment to donate his salary while in office. Honoring that promise and to further protect the American people, he is donating his 2019 Q4 salary to @HHSGov to support the efforts being undertaken to confront, contain, and combat #Coronavirus. pic.twitter.com/R6KUQmBRl1

Trump has written other checks donating his salary to the Small Business Administration, the Department of Transportation, Homeland Security, Veterans Affairs, the Office of the Surgeon General and to the National Institute on Alcohol Abuse and Alcoholism, among other recipients.

READ:  JK Rowling Says She Is A Domestic Abuse And Sexual Assault Survivor

A source told the Times that Trump’s contribution checks shown off at press briefings are never fake.

White House spokesperson Judd Deere slammed the media’s twisted attention to the check. “Leave it to the media to find a shameful reason not to simply report the facts, focusing instead on whether the check is real or not,” Deere said in a statement to the Times.

Trump vowed during his campaign that he would donate his salary each year. Critics have accused him of collecting far more from customers of his private businesses who spend large amounts to curry favor with Trump and to win favorable federal treatment or contracts. U.S. taxpayers have also been stuck with the price tag for Trump’s frequent trips to his private golf resorts that serve to publicize those operations. As of February, Trump’s golf trips cost the public $133.8 million, the equivalent of 334 years of his salary, according to an analysis by HuffPost.