Here’s where you can grab a beer at your local, provided you also order food and adhere to social distancing measures.

With coronavirus lockdowns in place since mid-March, many of us are itching to get out and – for many – get to the pub.

Here's where you can grab a beer at your local, provided you also order food and adhere to social distancing measures. 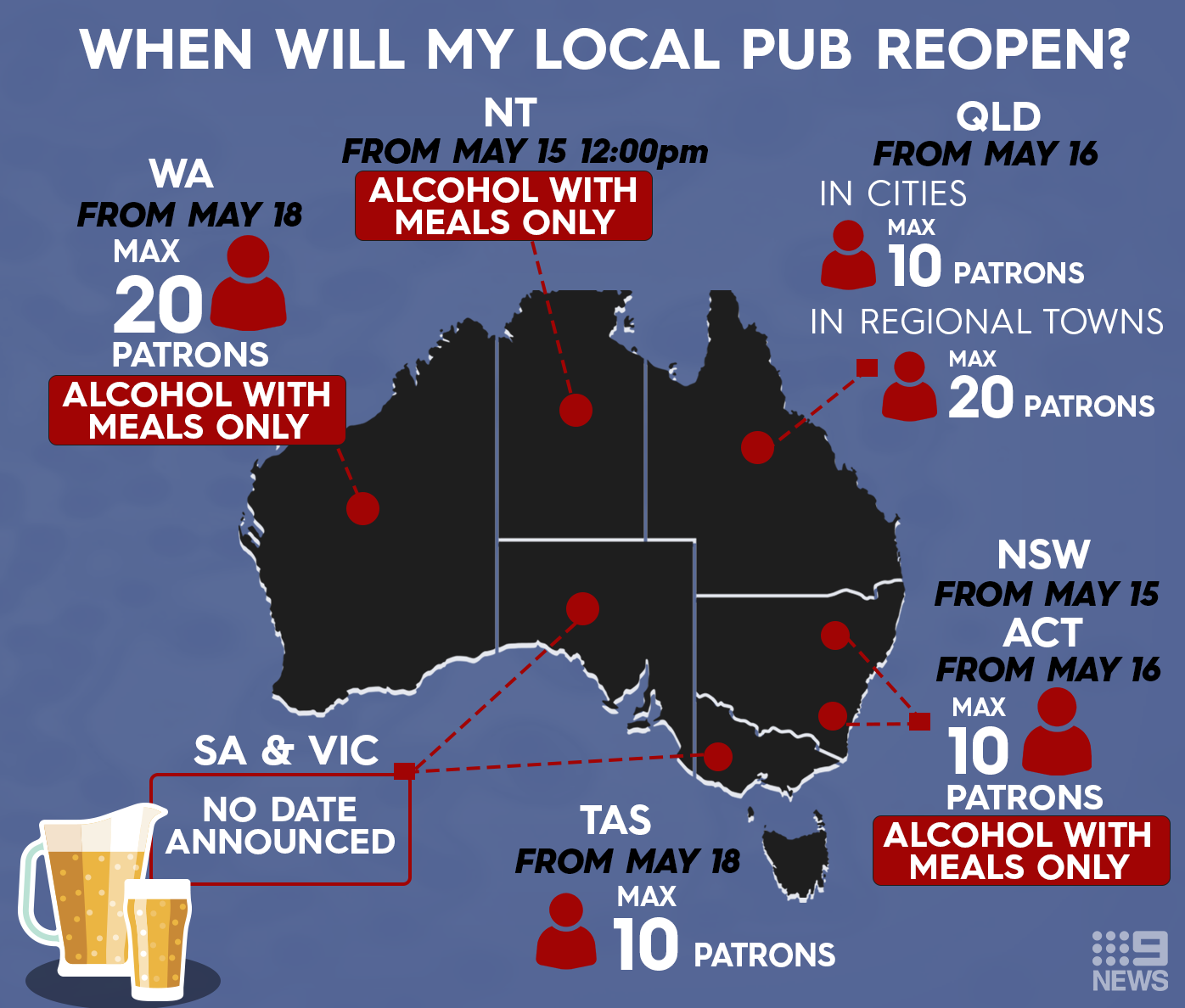 Pubs, cafes and restaurants will reopen on tomorrow across New South Wales.

But just 10 patrons will be allowed inside each venue at a time to ensure proper social distancing is observed.

"So, even if there's multiple rooms or multiple facilities in a venue, it's only up to 10 people in one venue," NSW Premier Gladys Berejiklian said. 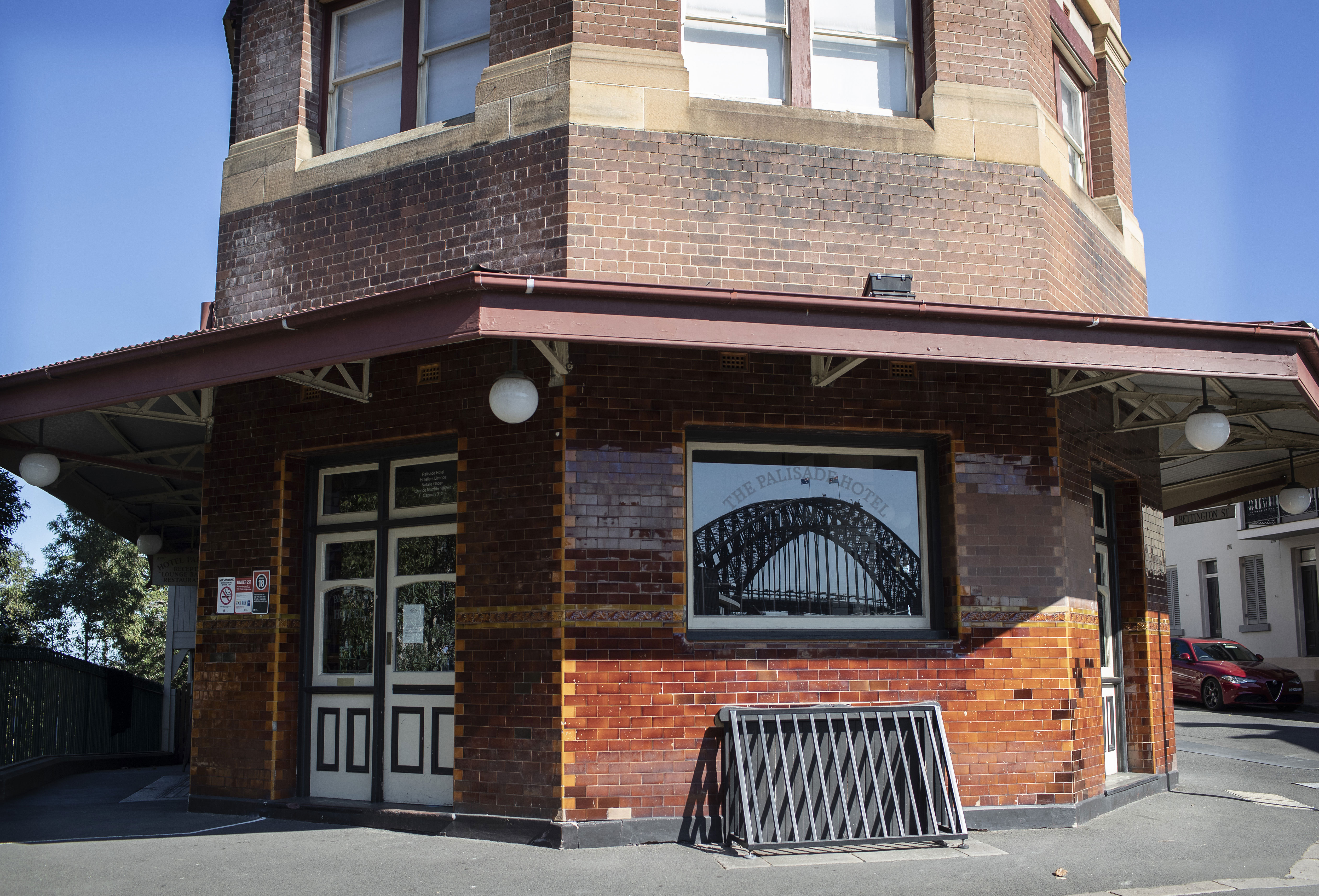 "For the first time in a long time, people will be out of the house for recreation purposes, and that means we all have to be vigilant."

Bars and gaming facilities will remain closed but table service for alcohol with a meal is allowed and takeaway services can continue.

From Saturday, Queensland will allow dining-in at restaurants, cafes, pubs, registered and licensed clubs, RSL clubs and hotels for a maximum of 10 patrons at one time.

That does not include bars or gaming venues.

The rules are more relaxed in outback and regional Queensland though, allowing up to 20 patrons inside restaurants and pubs at a time for locals only – proof of residence must be shown.

"XXXX Gold will be travelling out west over 1000 kilometres going, of course, to places like Blackall, Barcaldine, Ilfracombe and Longreach," Premier Annastacia Palaszczuk said. 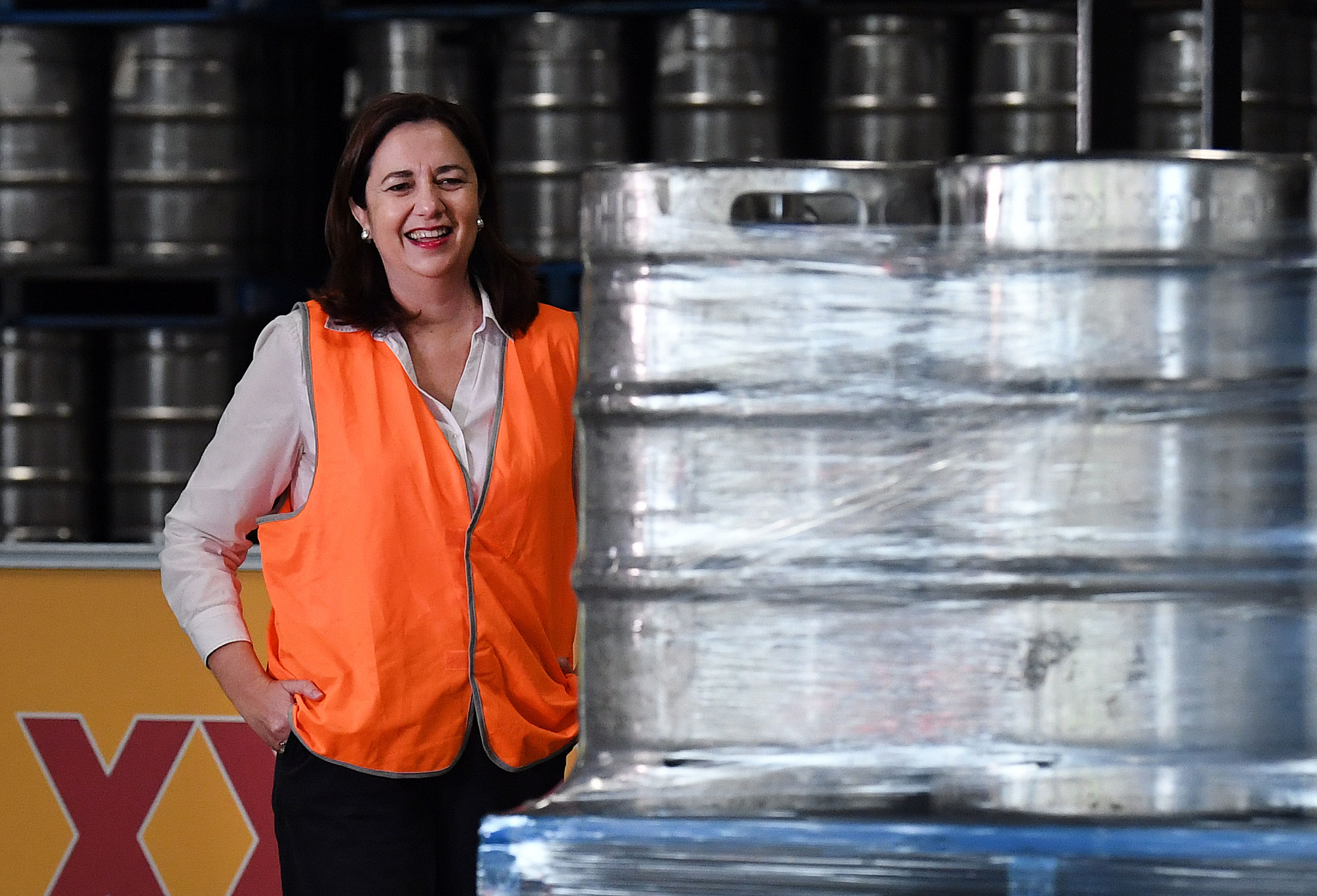 If all goes to plan the restrictions will ease further to allow pubs and eateries in cities a maximum of 20 patrons, the premier said.

Victoria continues to have the strictest rules nation-wide with no date set for the reopening of pubs, clubs, cafes or restaurants to in-house patrons.

The situation is expected to be reassessed at the end of May.

Speaking on Monday, Premier Daniel Andrews said it was not "viable" for many businesses to reopen for 10 patrons or less. 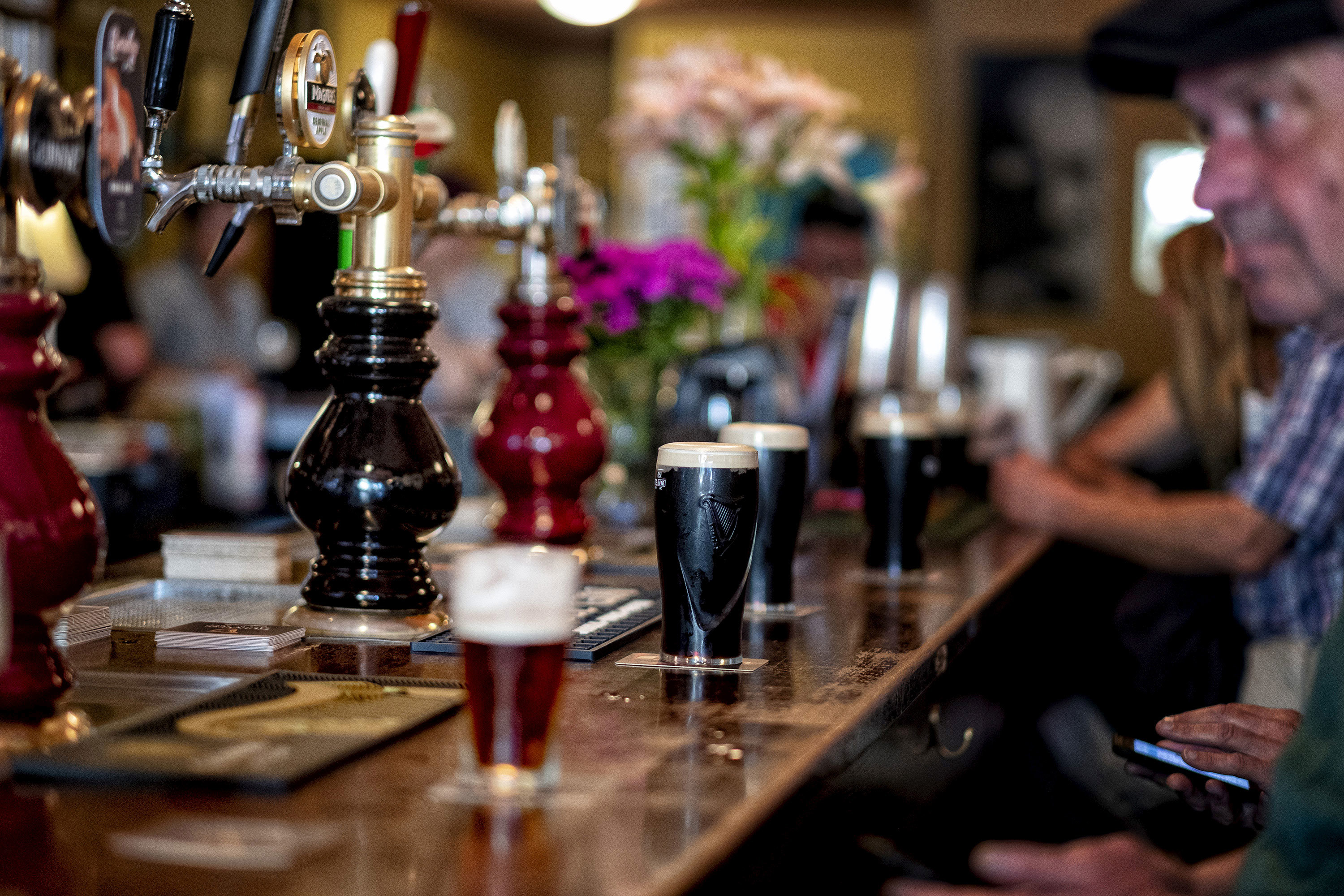 "The feedback from many businesses is that at just 10 patrons, it's hard to be viable," Mr Andrews said.

"I think takeaway will be a feature for a long time. If we can supplement and complement that with table service at more than 10, there's every chance for a more viable model.

From noon on Friday, Northern Territorians can get a beer from the pub – provided they order a meal.

Patrons will be given a two-hour window for in-house dining at pubs, cafes, restaurants, bars and RSL clubs.

Shopping centre food courts will also allow people to sit down and eat their meals.

"Eight hundred and thirty-four businesses have lodged a plan with us already to have a COVID-19 safe workplace… I expect we'll see quite a few more before Friday," Chief Minister Michael Gunner said.

Like Victoria, South Australia has not set a date for the reopening of pubs.

Step one restrictions came into effect on Monday, allowing cafes and restaurants to have 10 people dining outdoors.

But alcohol is not allowed.

The government is working on a plan to have South Australians back at the bar by early to mid-June, but it will still look different to what had been the norm.

But when patrons are allowed back into the pub, Premier Steven Marshall said it won't be the same.

"So, if people are going to go along to a pub, if they just want to have a beer they're going to have to do it seated down at a table, so that we can monitor all that social distancing," Mr Marshall said.

A maximum of 20 patrons will be allowed for in-house dining from Monday, May 18, in Western Australia.

The rule will apply to pubs, bars, community clubs, hotels and the casino in the state and includes indoor and outdoor eating spaces.

But, like all businesses across the country that are welcoming sit-down customers since restrictions eased, they'll have to observe the four-square-metre rule.

Getting just a drink at the pub, however, is not allowed. 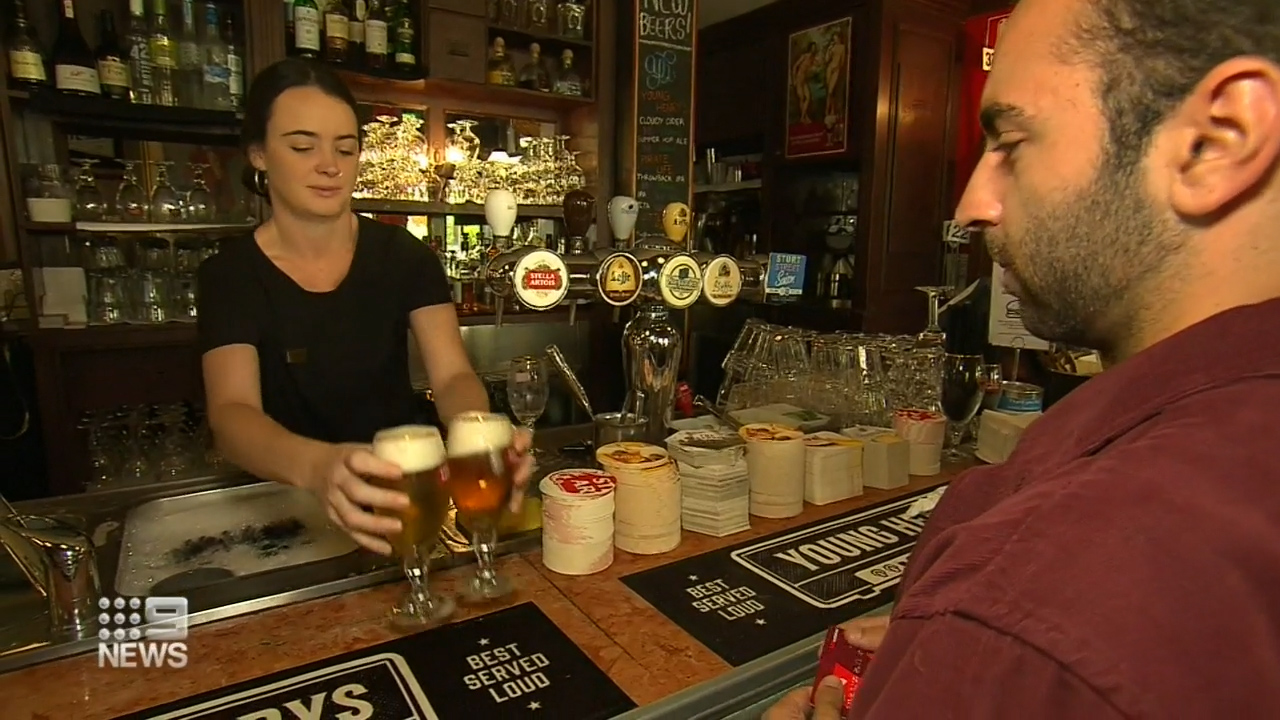 Premier Mark McGowan said the doubling of the number of people allowed was "a major step forward" and ahead of the other states.

Pubs will reopen in Tasmania from Monday with social distancing measures in place.

Up to 10 patrons will be allowed inside for seated dining and a drink at pubs, clubs, hotels and RSLs.

From Saturday, pubs, clubs, restaurants, cafes and bars will reopen in Canberra.

There'll be a 10-person limit at each venue and pubs and bars will sell alcohol only if it it accompanies a meal.

ACT Chief Minister Andrew Barr acknowledged it would only be economically feasible for a small number of businesses to operate under the new guidelines.

"Local hospitality businesses are encouraged to only reopen if the model works for them," Mr Barr said.

"Choosing to remain takeaway-only for now will have no impact on their ability to consider reopening as the maximum seated occupancy increases in the coming months."