It’s beginning to look a lot like a wet Christmas around much of Australia, but three lucky states are on track for a classic Aussie Christmas Day, with sun and heat on the way.

It's beginning to look a lot like a wet Christmas around much of Australia, but three lucky states are on track for a classic Aussie Christmas Day, with sun and heat on the way.

While most won't be flocking to the beach this Christmas, Weatherzone has advised Aussies not to let a spot or two of rain hinder outdoor celebrations.

READ MORE: Everything you need to know about this year's Christmas trading hours 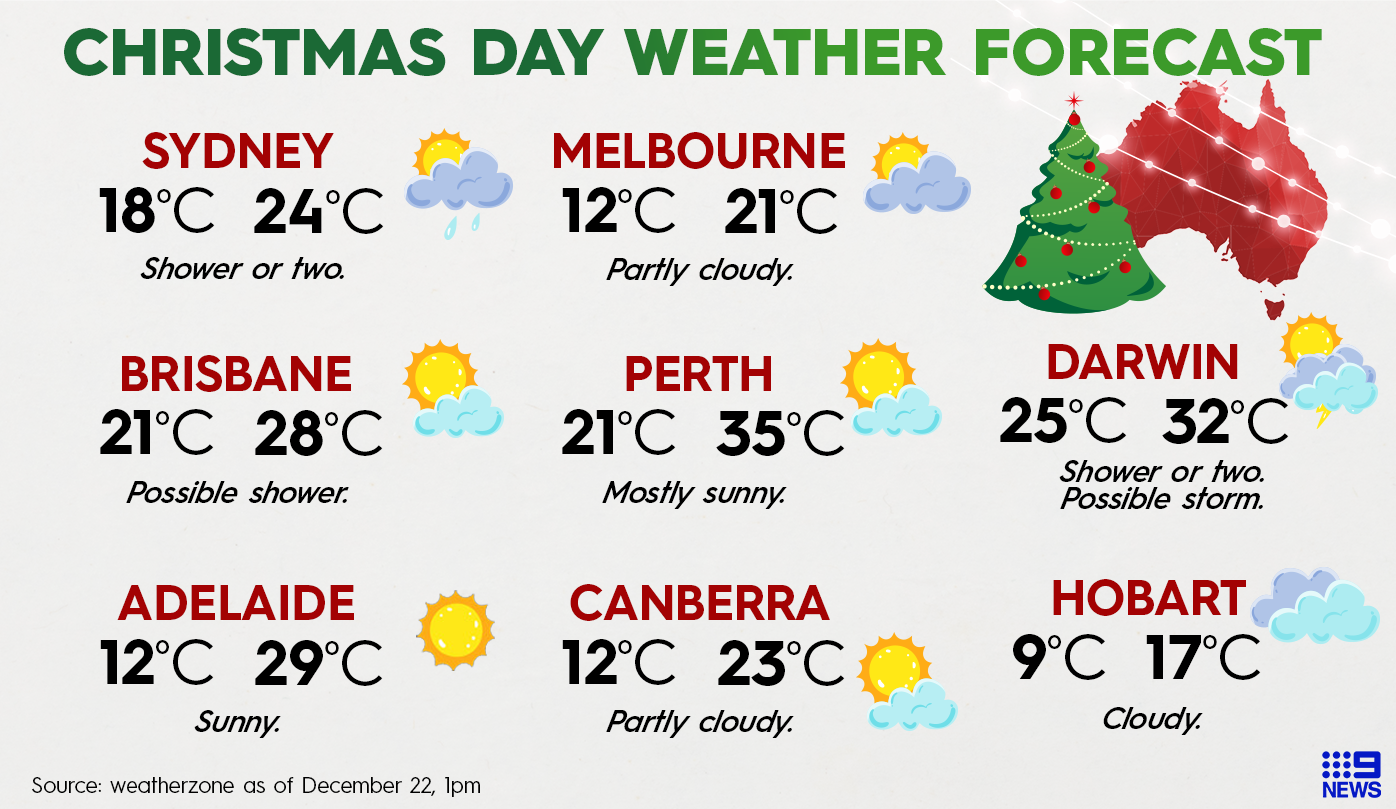 Current forecasts, backed by the Bureau of Meteorology (BoM), suggest Sydney, Canberra, Brisbane, Darwin and Hobart will be mostly cloudy with showers and storms forecast for some cities.

"I wouldn't let a chance of a possible shower ruin any plans," meteorologist for Weatherzone Brett Dutschke told nine.com.au.

Melbourne, Perth and Adelaide will be left to soak up the sun for the rest of us, with warmer conditions expected.

Here's what all the major cities are predicted to see on Christmas Day.

Sydney is expected to reach a maximum temperature of 24C with showers scattered throughout the day.

While there is a chance of storms, torrential rain is unlikely.

South-easterly winds could see the temperature drop to a low of 19C.

"It's possible parts of Sydney will stay dry, but showers will be scattered throughout the day."

It's a similar forecast from the Bureau of Meteorology.

"For Sydney and Canberra, it is looking warm, with temperatures likely to be in the mid-to-high 20s, but with the chance of afternoon showers and thunderstorms," the BoM noted in its annual forecast.

READ:  Bushfire victim on phone with brother when line cut out 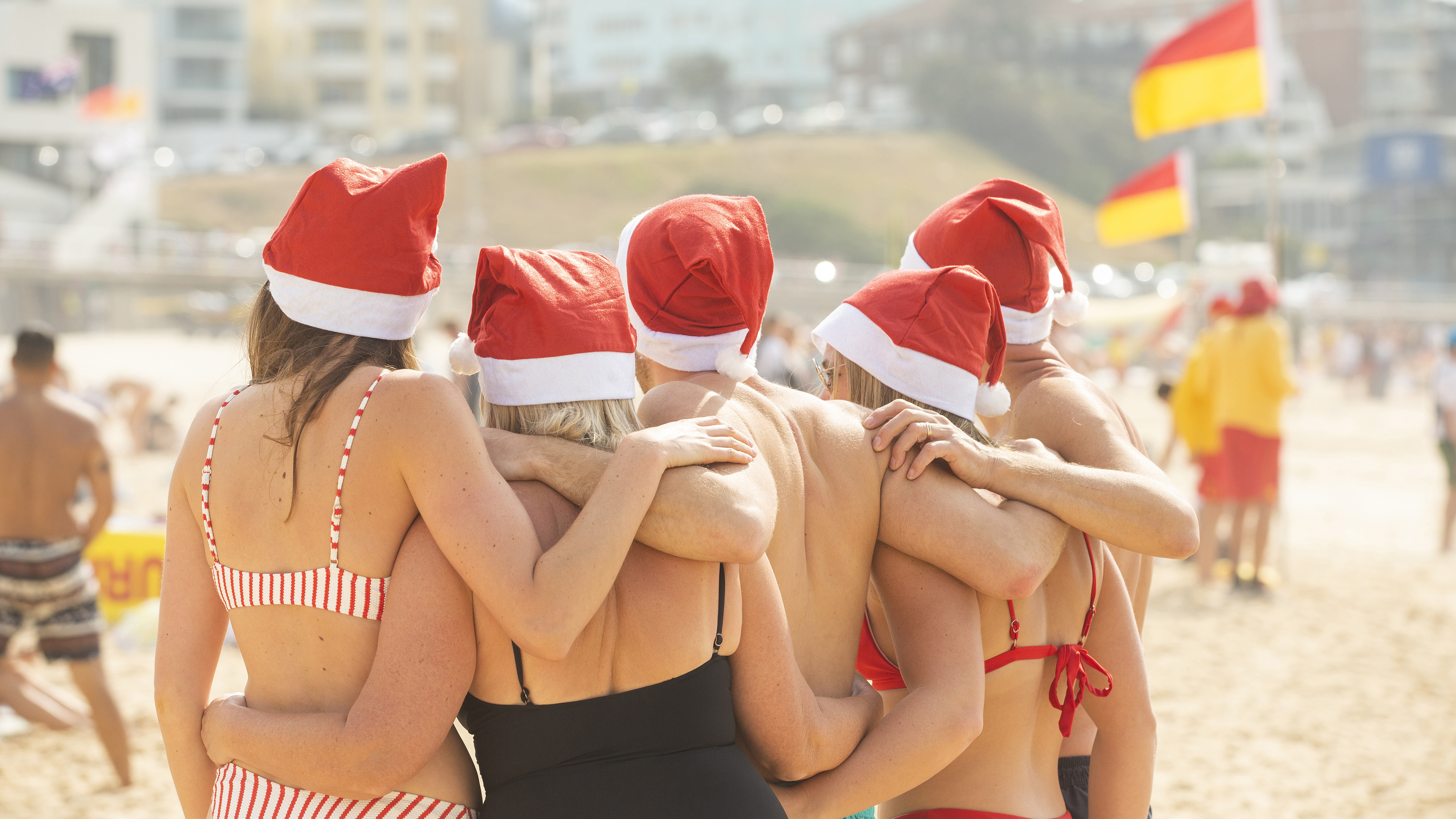 The Sunshine State won't live up to its name this Christmas with rain forecast for the Queensland capital.

The latest forecasts show showers and thunderstorms contracting north from tomorrow as a south-easterly change moves up the east coast, increasing about the Central Highlands and Coalfields and Central Coast from Thursday to Saturday.

Daily rain totals of 100mm are possible on Friday and Saturday in the area.

Cooler south-westerlies behind the trough should bring a reprieve for most of the state as we head into Christmas.

The southeast should see Christmas Day temperatures 2C or 3C below average.

Most of the state will be around 4C below average, with parts of the Central West and North Highlands and Coalfields seeing daytime temperatures 8C to 10C below average due to cloud cover and rainfall.

On Christmas Day mostly clear conditions in the south-west but a chance of a shower or thunderstorm elsewhere, with the heaviest falls likely to be around the Northern Goldfields, Central Highlands, and the Central Coast.

From Boxing Day and heading into the weekend, temperatures about the southeast and central coasts and inland will begin to rise again and rainfall areas will push into the tropics, though easing from the totals expected about the Central Coast late this week. 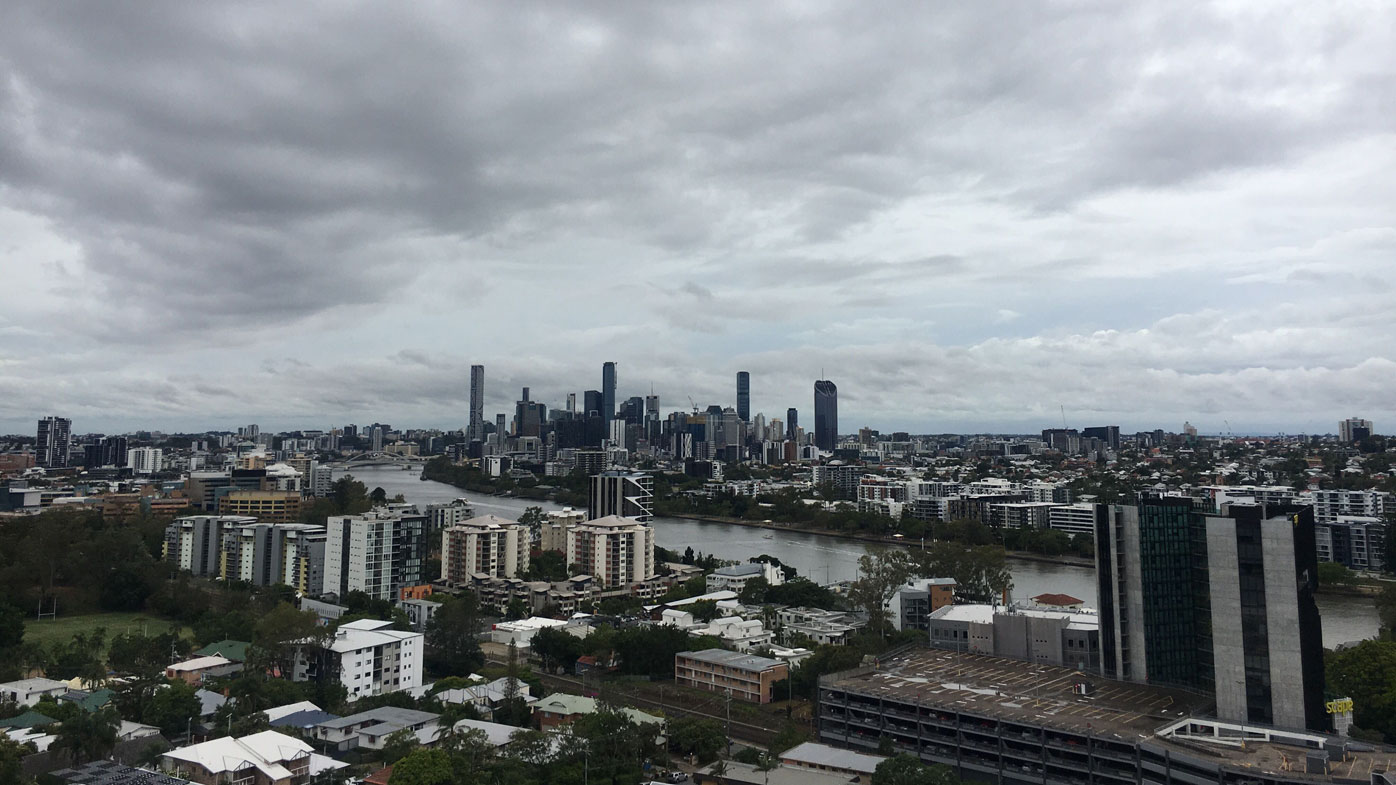 Despite the cold, wet conditions Mr Dutschke reassured Queenslanders the weather won't be as extreme as the severe conditions seen over the last fortnight.

"Brisbane has a high chance of being wet," Mr Dutschke said.

"At this stage it looks like rain is likely to be on and off for Christmas Eve and Christmas Day."

Muggy conditions and a possible thunderstorm will see Brisbane reach a maximum of 28C and a low of 21C.

Unlike most of the country, Adelaide will be mostly sunny for its Christmas festivities.

The temperature is predicted to reach 29C, but south-easterly winds tending south-west could produce a low of 12C.

Mr Dutschke said while the sun will be out and temperatures above average, it is "unlikely to be extremely hot". 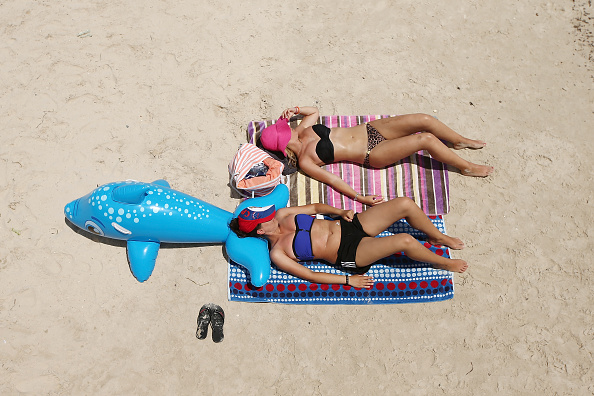 Gloomy weather is predicted to shroud Australia's capital with showers and a chance of storm.

Temperatures will "be comfortable", predicted to reach a maximum of 23C.

It is expected to drop to a chilly 12C in the evening following easterly winds. 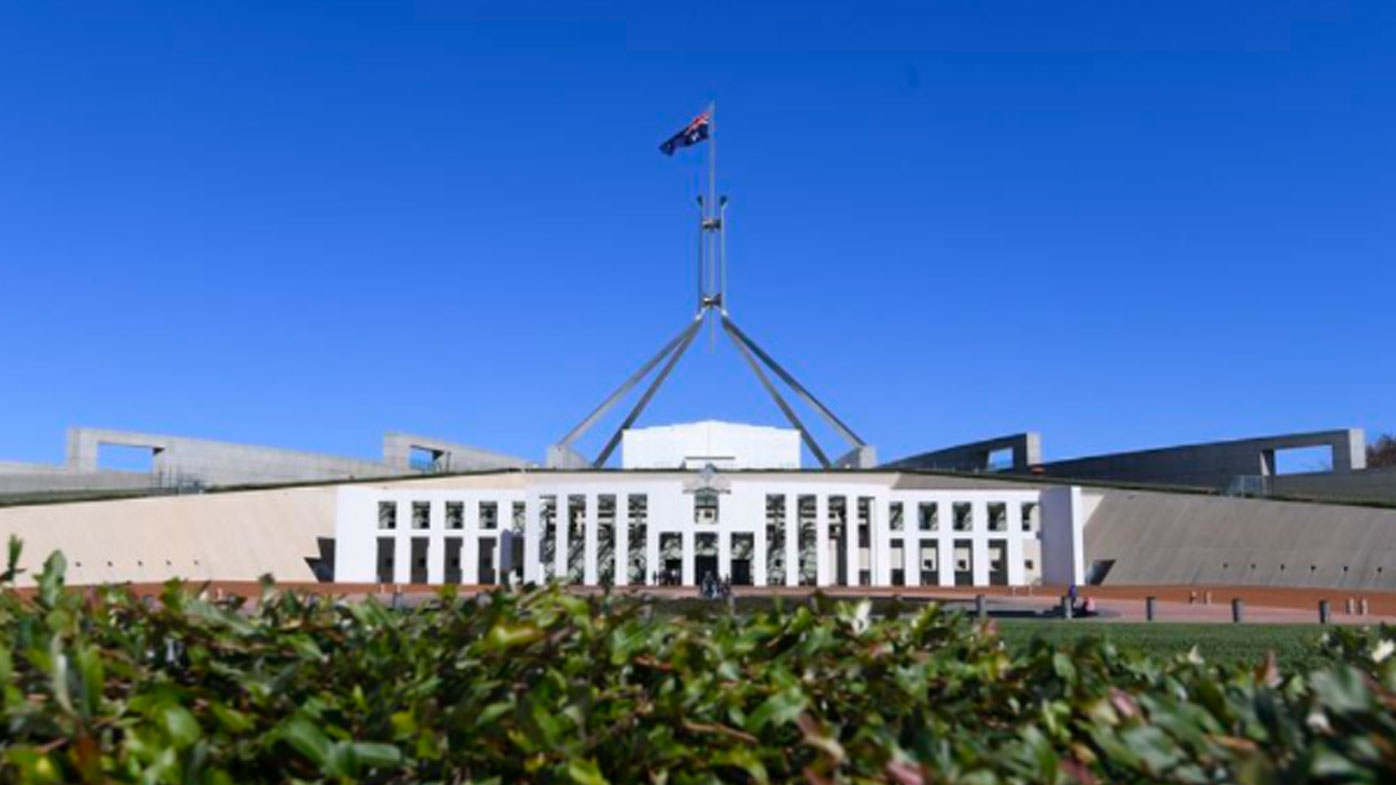 Darwin will see showers on Christmas Day but "the days leading up to Christmas will be wetter than Christmas itself," Mr Dutschke said.

Temperatures will be warm, ranging between 25C and 32C.

Melbourne will be mostly sunny. Southerly winds are expected as temperatures reach up to just 21C, with a low at 12C.

"Cloud cover will be around on Christmas day but still a fair bit of sunshine," Mr Dutschke said. 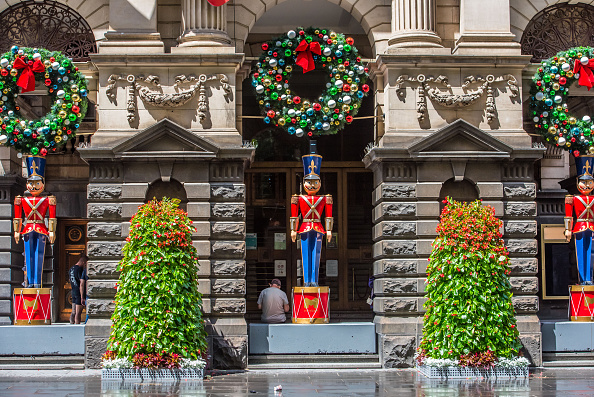 People in Hobart will wake to mostly cloudy skies and showers will develop later in the day.

North-westerly winds will become a fresh south-easterly in the afternoon, seeing temperatures drop to 11C.

"Generally dry, just a chance of a brief shower on both Christmas Eve and Christmas Day," Mr Dutschke said.

Perth will be mostly sunny, reaching a maximum of 33C and a low of 19C.

"It will be warm to hot leading up to Christmas," Mr Dutschke said.