Farmers in drought-striken NSW and Queensland communities are celebrating their best rain in years, while on the other side of Australia a cyclone looms.

The band of storms brought down large trees and caused flash flooding and widespread commuter delays in south-east Queensland, with more than 200mm falling in some areas.

The rain is expected to increase water levels in a number of rivers and catchments around the two states.

On the opposite side of the country, a tropical cyclone is developing and was expected to hit the WA coast late yesterday. 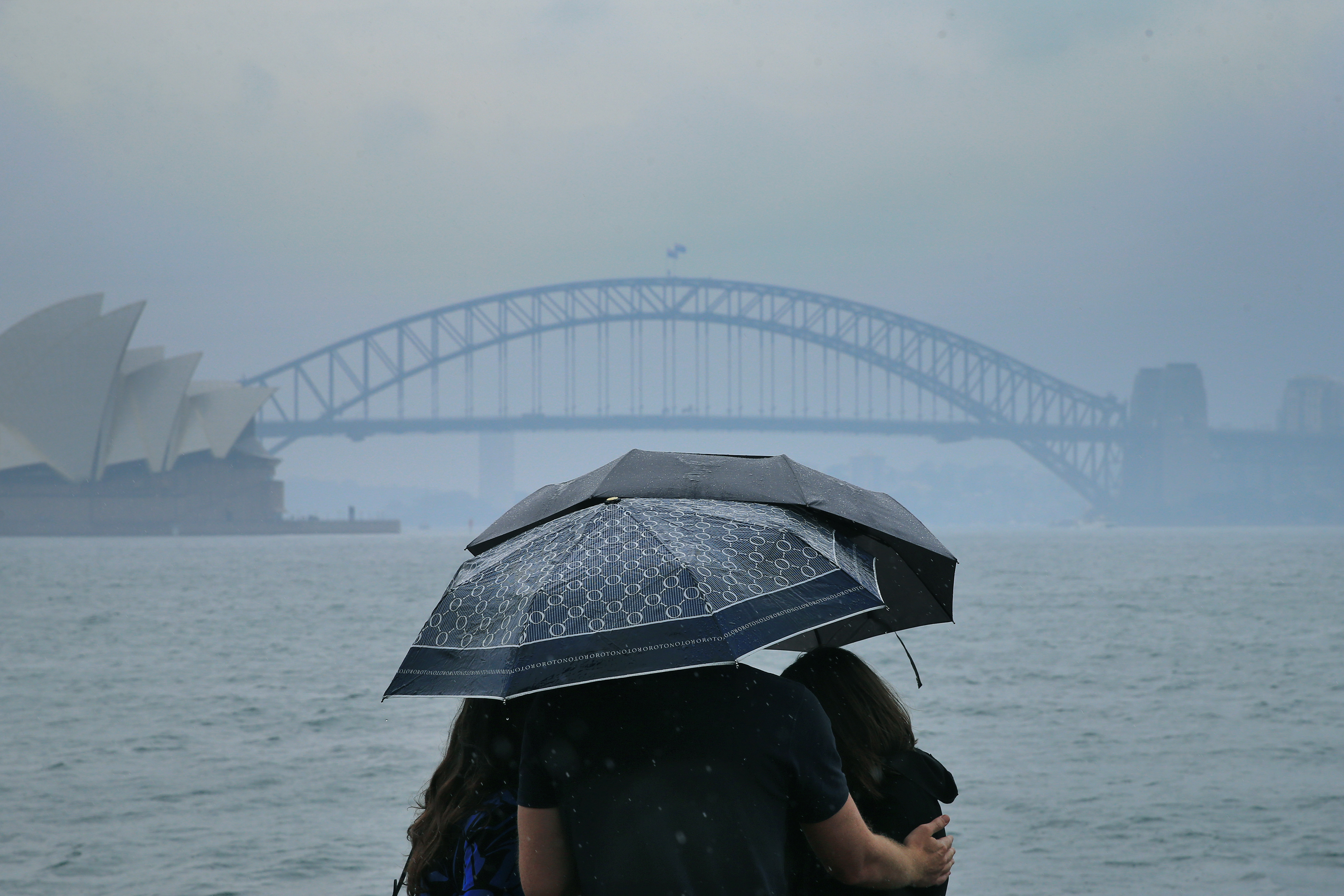 Welcome rain has fallen on the bone-dry towns of western New South Wales, with Coonamble, Dubbo and Cobar all copping a drenching.

But it was along the state's north coast, in areas ravaged by bushfires two months ago, where the biggest falls came.

"As far as a general widespread rain event, this is one of the best we've had in a couple of years," Mike Funnel from the Bureau of Meteorology told 9News.

"We're expecting the multi-day totals for a wide area to nudge 200mm." 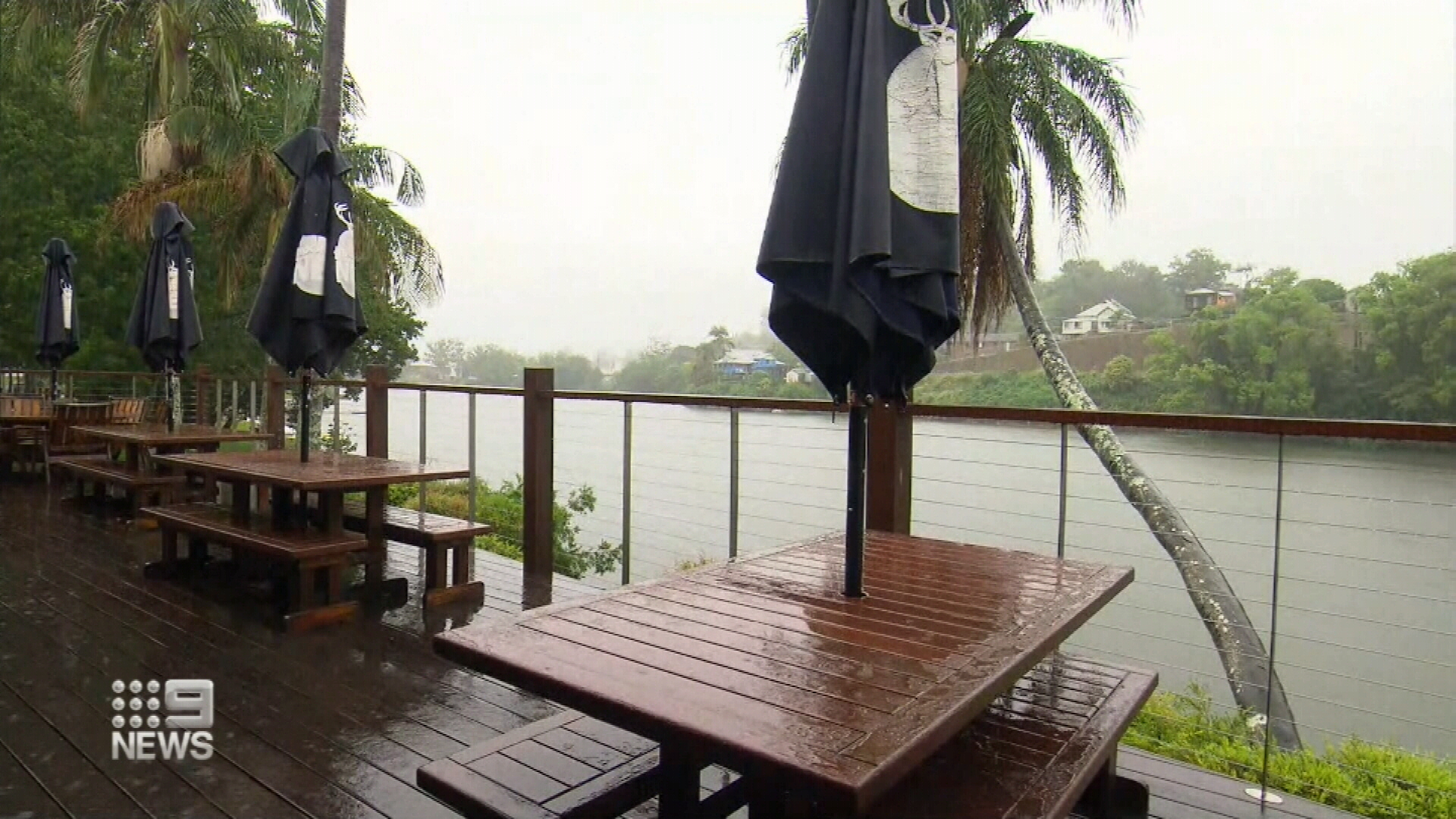 After some flash-flooding in Brisbane, the rain rolled south over the border with the town of Murwillumbah lapping it up.

Since 9am, 102 millimetres have fallen on Mullumbimby, 78mm in Coffs Harbour, and 54mm in Lismore.

Further inland, Glen Innes received 15mm, as did Coonabarabran in the north-west.

More is needed, but Mr Funnel said it could be on its way.

"It's likely that the severe weather warning will be extended southard over the next couple of days," Mr Funnel said. 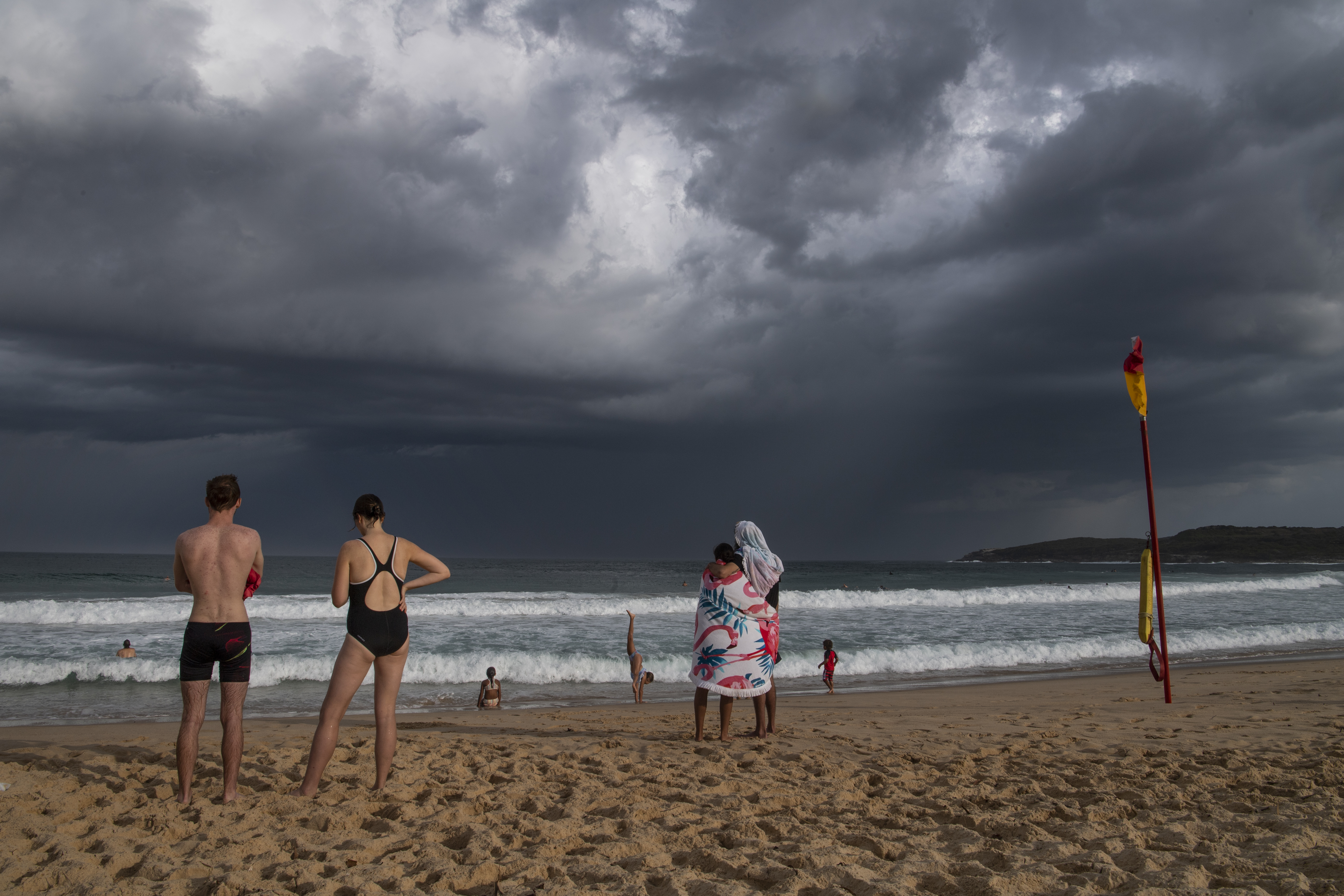 This trough is expected to linger near the coast and in the longer-term gradually shift southwards during Friday and over the weekend, increasing rainfall along central and southern parts of the coast and the adjacent ranges.

Further inland, the drought-ravaged communities of Walgett and Dubbo are also expected to receive some relief, although falls will not reach the torrential levels seen on the coast.

READ:  Aussie stocks rocket up 2 per cent as dollar jumps to 61.37 US cents

A Flood Watch has also been issued for several river catchments along the North Coast.

Locations which may be affected include Lismore, Grafton, Coffs Harbour, Port Macquarie, Taree and Dorrigo.

On the weekend, there is potential for heavy rainfall along parts of the central and southern coast and warnings are expected to be issued for these areas in coming days.

Showers are forecast for Canberra over the weekend and early next week as the trough moves down towards the South Coast.

The fire-hit communities in NSW's south-east will have to wait a little longer, with the communities around Nowra and in the Bega Valley – where dozens of homes have been lost to fire – expecting rain early next week.

Authorities have warned residents around fire-hit communities to remain particularly vigilant as flooding and heavy rainfall are likely to cause more significant damage in these areas.

The bushfires have also caused significant damage to major catchment areas in NSW, prompting WaterNSW to implement measures to limit water contamination ahead of the rains.

Approximately 300,000 hectares of important catchment areas have been burned.

Warragamba Dam, which provides drinking water to most of Sydney, is currently at 41.7 per cent capacity – just three per cent points from its lowest level ever which was recorded during the Millennium Drought in December 2004.

According to WaterNSW, the extent of any water quality impacts on water in the dam will depend upon the timing and intensity of future rainfall events.

A WaterNSW spokesperson said that two silt curtains had already been deployed to intercept material that could pose a water quality risk to the storage. The body is also assessing the effectiveness of additional ash and sediment control measures around the storage.

"Warragamba also has the capacity to select water from varying storage depths."

The other major sources of raw water for Sydney, the Metropolitan storages at Cataract, Cordeaux, Avon, Nepean and Prospect Reservoir to date remain unaffected by the fires and are available to supply water if Warragamba storage is affected by runoff following a significant rainfall event.

North of the border, falls of up to 106mm fell on parts of Brisbane, while areas near Tin Can Bay recorded up to 260mm.

The falls were heavy enough to fill dams west of Roma that just three days ago were empty.

Heavy falls and strong winds brought down a large tree across powerlines at Main Beach on the Gold Coast, while bus services across Brisbane were delayed by up to an hour.

Double Island Point has received 122mm, Tewantin has received 112mm, Goomboorian had had 136mm and Teddington Waterworks has recieved 156mm, all in the last 24 hours.

Farmers in central Queensland are rejoicing over what they say are the best falls they've seen in years.

Grazier Larry Farquar, from Katrina Station near Rolleston in the Capricornia region, said 72mm fell in the space of three hours late on Tuesday night.

He said that was the biggest rainfall there in two years.

"It's unreal. It's just like Christmas but better - it's just great," Mr Farquar said.

But North Burnett Mayor Rachel Chambers said while the rain had transformed parts of the region, others continued to miss out.

"When the country has that rain, holy moly it looks amazing, the green.

"I saw cattle walking through knee-high grass driving into Monto but I'm also very aware that we still have parts of the region looking like a dust bowl and I feel for everyone there."

The rain is now moving down the coast to southern Queensland and northern NSW.

Several days of showers and thunderstorms over inland catchments may cause river level rises into the weekend. 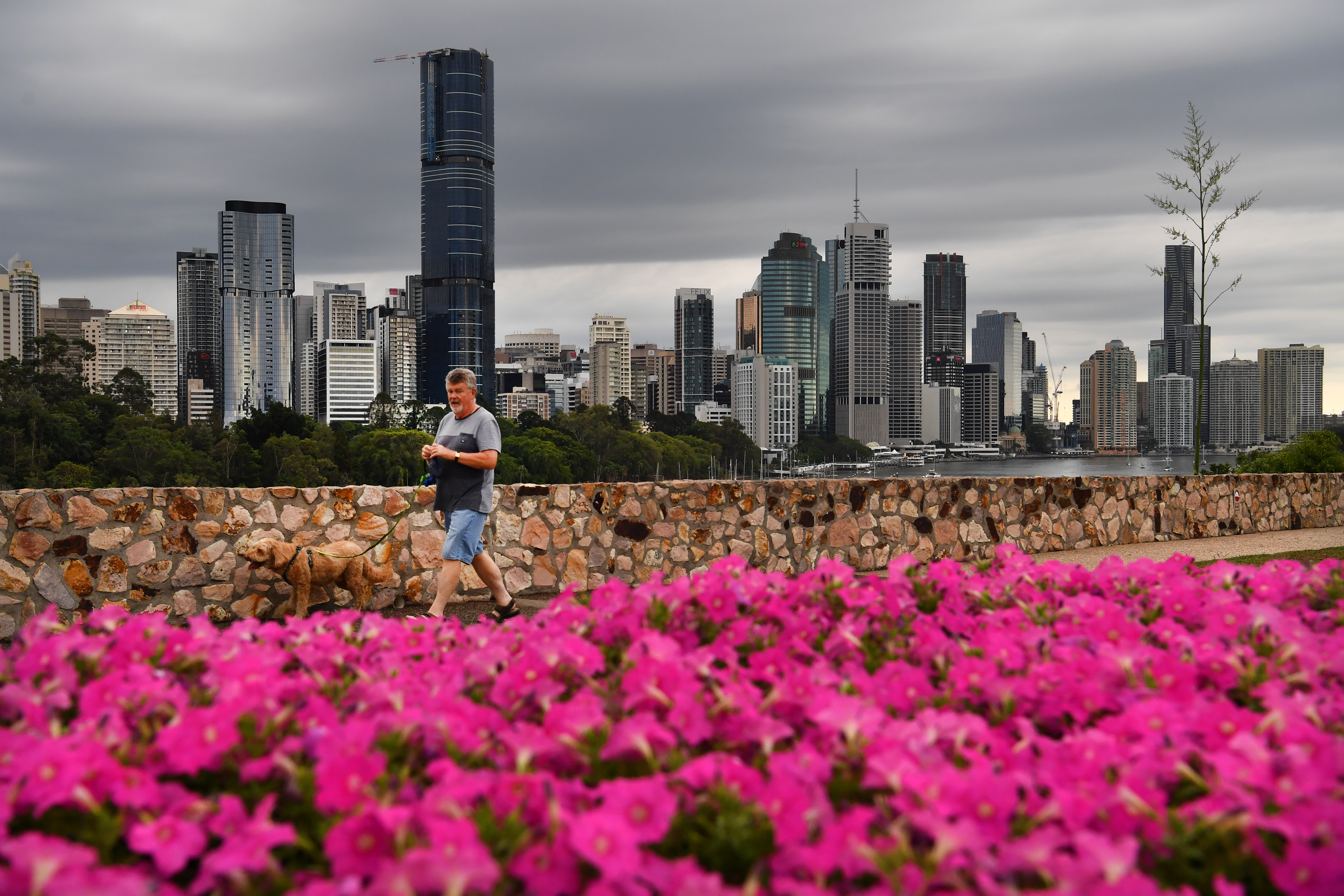 The wet weather is expected to ease on Friday, before intensifying again on the weekend.

"The rainfall should increase again on Sunday as the next upper trough will arrive in the south-east, so Sunday and Monday it may pick up again," Bureau of Meteorology senior forecaster Gabriel Branescu said.

Coastal communities in Western Australia's north are being urged to prepare for the country's first severe tropical cyclone crossing of the season, which is expected to bring torrential rain and wind gusts of up to 200km/h. 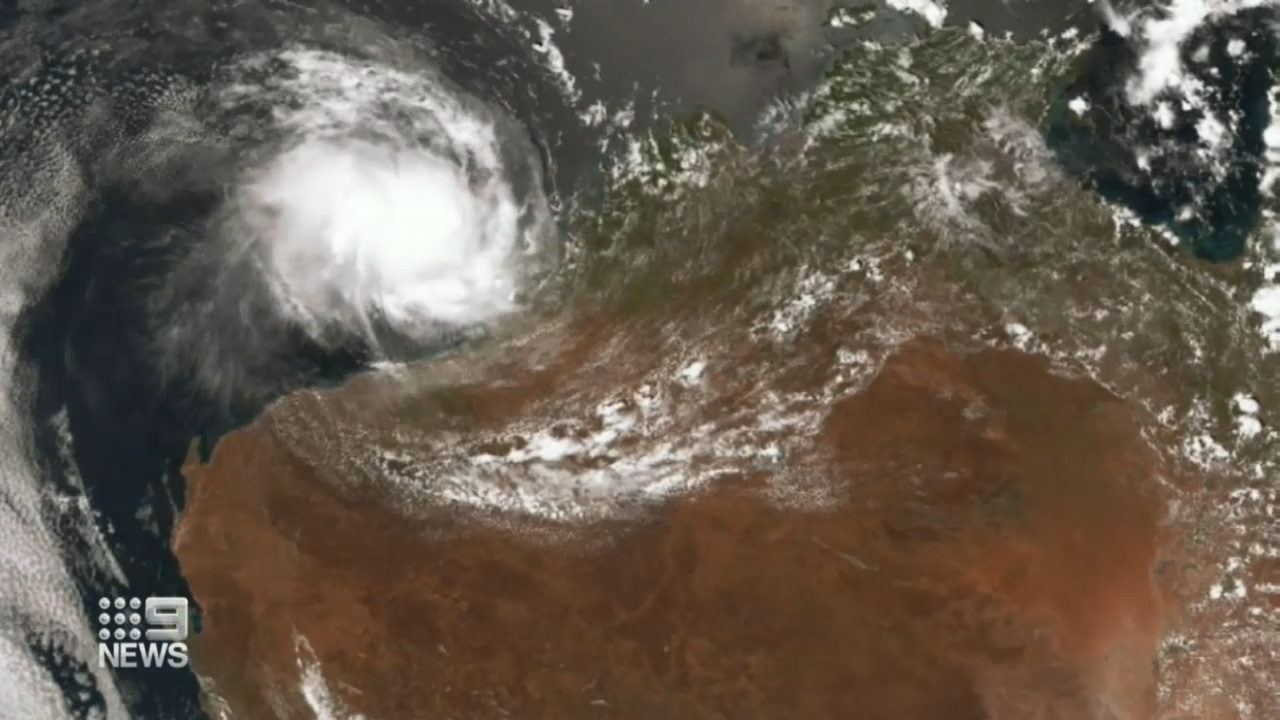 Cyclone Damien, currently a Category One, is likely to develop of the north coast of Western Australia this afternoon and is expected to his somewhere between Port Headland and Onslow.

It is expected to hit the coast just north of Karratha as a Category Four at about 2pm on Saturday.

The region could be hit with winds of up to 230km/hr, with flooding also expected. 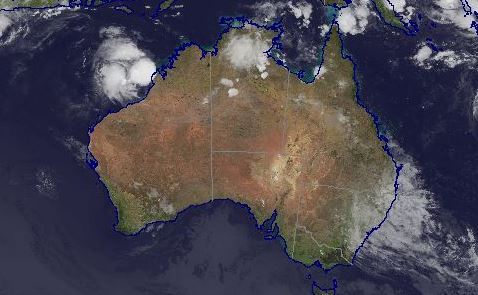 The last Category Four cyclone to hit WA landed on the coast at almost exactly the same spot in 2013.

Possible thunderstorms are forecast in multiple parts of the state including Mildura, Horsham, Bendigo, Seymour, Mt Hotham, Wangaratta and Ballarat.

Melbourne is forecast to miss the rain with sunny and warm conditions expected for the next three days.

Adelaide and communities around SA should expect sun and temperatures above 30C in most areas.

Coober Pedy and Leigh Creek were forecast to reach a maximum of 36C yesterday.

Temperatures up to 37C were predicted in Tennant Creek and Alice Springs yesterday.

Possible thunderstorms were forecast for Katherine, Nhulunbuy and Borroloola yesterday while Darwin will remain relatively dry with a maximum temperature of 33C.

Tasmania has returned to its average temperatures for February following a spike late last week.

Hobart was set to be mostly sunny and 22C yesterday with similar conditions around the rest of the state.