Protesters upset by social media videos of US police arresting a pregnant Black woman have now occupied the lawn in front of Kansas City Hall for more than five days.

Protesters upset by social media videos of US police arresting a pregnant Black woman have now occupied the lawn in front of Kansas City Hall for more than five days.

The footage shows an officer kneeling on the back of pregnant woman Deja Stallings during an arrest after a gathering at a gas station. However, her lawyer disputes the police account of the events leading to her arrest.

The Kansas City Police Department said in a statement that police were called to the location on September 30 at 10.49pm by a security officer at the gas station and convenience store who said there were "15-20 individuals fighting on the business's property". 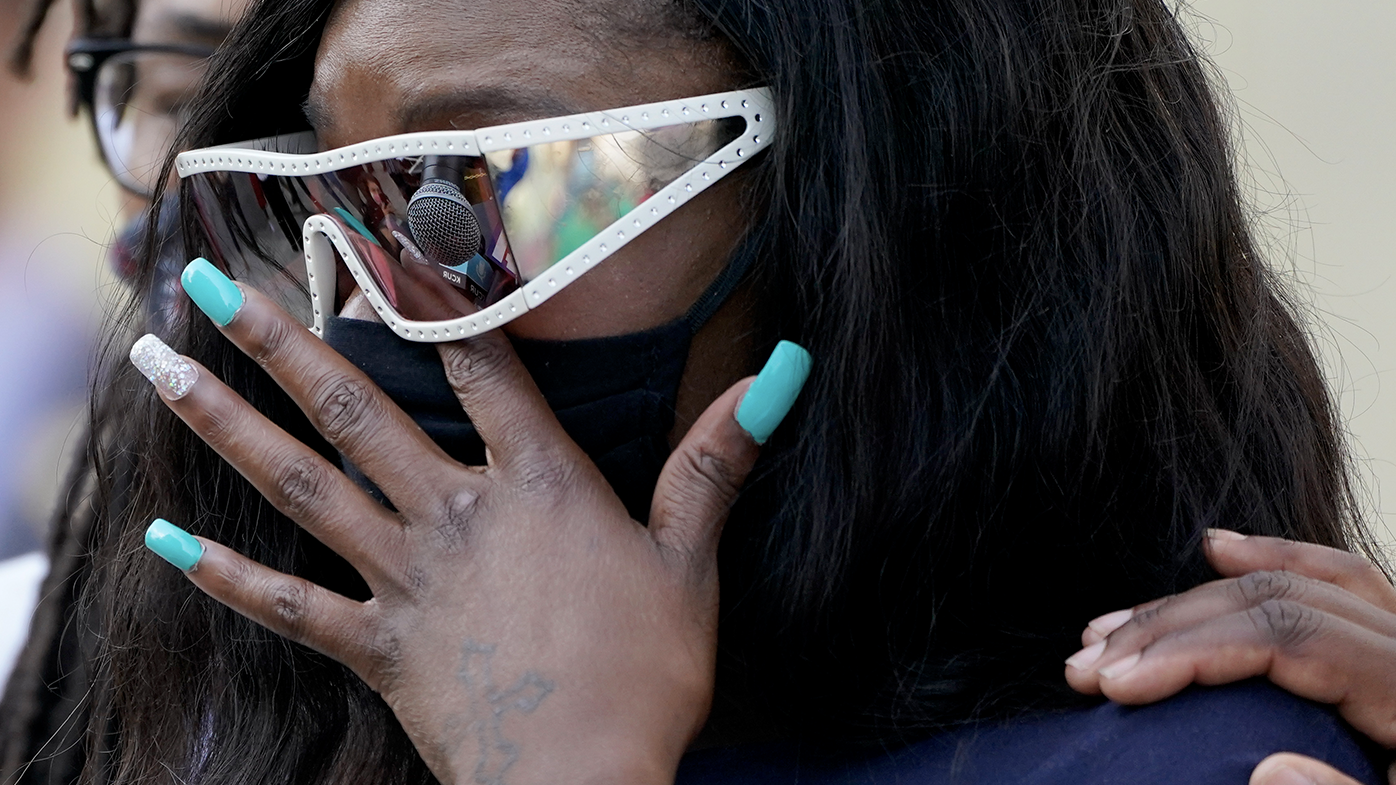 When officers arrived minutes later, the owner told officers that "he wanted everyone off the property who wasn't buying anything," according to the statement.

Security camera video released by the police of the incident shows as many as a dozen people gathered at the business some points, some pushing each other.

According to the statement, a man physically interfered with the officers' investigation and refused to leave.

Officers attempted to arrest him but the crowd physically prevented the officer from arresting the man, who then took off running, the statement said.

He tripped, and officers attempted to get him in custody.

"At that time, a woman (seen in the video) and man tried to pull the suspect away from officers," the statement said.

A pregnant woman is arrested

Chanel Le'Yoshe, who saw the arrests and shot some of the videos posted online, told CNN there was no fighting or issues before police arrived.

READ:  The rise of the American 'soldier-cop'

According to Ms Le'Yoshe, the gathering was organised by a local Black activist, who was releasing some balloons to honour a victim of violence.

Ms Shaw disputes the police's assertion that Ms Stallings tried to pull the suspect away. 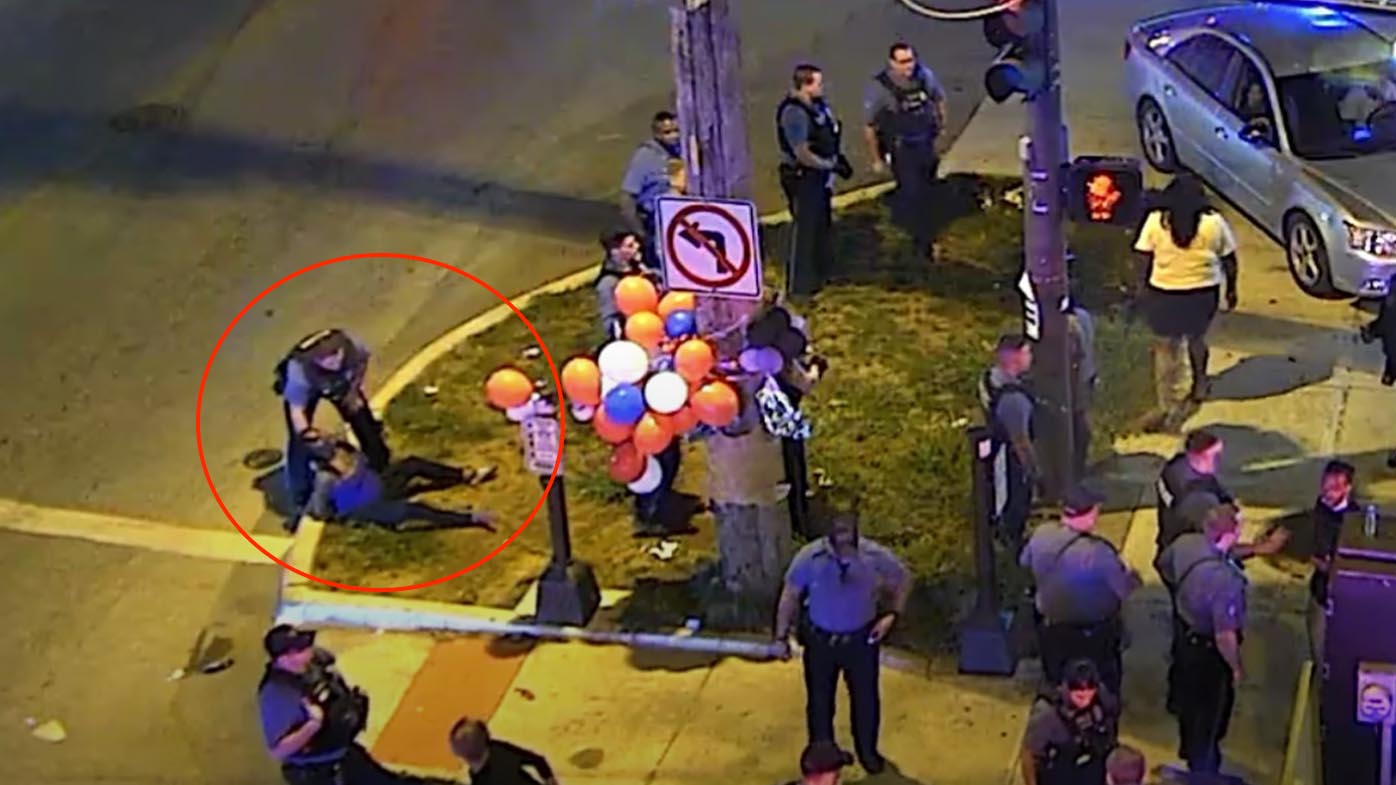 The security video shows Ms Stallings briefly step between an officer and the man he was moving to arrest, but the officer quickly pushes past her to chase after the suspect, catching up with him just a few feet later.

Police said one of the officers then tried to arrest Ms Stallings while she was standing, but "she continued to physically resist arrest, at which point he placed her on the ground to effect the arrest".

Their arrests occurred out of view of the security camera video.

Ms Le'Yoshe's social video picks up with Ms Stallings already face down on the ground, with an officer's knee on her lower back and buttocks.

Several second later, officers are seen rolling Ms Stallings over and trying to sit her up by pulling up on her right arm.

A second video shot by Ms Le'Yoshe, as well as the security camera footage, shows Ms Stallings sitting with an officer who appears to be helping her remain upright. The police said that "the officer who arrested the woman stated he took care not to apply pressure with his legs".

Police called an ambulance and said Ms Stallings was evaluated at a hospital and released.

"The question is only why this officer body slammed a pregnant woman and put his knee and her back," Ms Shaw said.

"What they're saying is because they asked her to leave, because she was pulling this away from an officer that that somehow justifies a white, large officer, body slamming 120-some pound (54 kilogram), nine-month pregnant woman, twisting her arm above her head and kneeling in her back."

While one video shows Ms Stallings on the ground with an officer's knee on her, they do not clearly show the moments before she was on the ground or her arm being twisted.

Ms Stallings has been charged with interfering with an arrest, Ms Shaw said.

In response to the video, a group of protesters, including Ms Shaw, have been protesting outside city hall demanding the resignation of Police Chief Richard Smith and for the city to redirect 50 per cent of the police department's budget to social services aimed at the city's Black community, the lawyer said. Kansas City police spokesman Captain David Jackson told CNN that "the chief will not be resigning".

Mr Jackson said that the department does not plan on naming the officers involved in the incident.

At the moment, none of them are facing any type of administrative or disciplinary action, he said.

However, Mr Jackson did note that "if more information becomes available that decision can be evaluated."

Protesters plan to remain at City Hall until their demands are met or someone comes to remove them by force, Ms Shaw said.

Meanwhile, Ms Shaw said that Ms Stallings now has "nerve issues with her back" as well as a large bruise.

She went to the hospital twice, once immediately after her arrest, Ms Shaw said, but the baby appears to be uninjured by the incident.