Health authorities are rushing to alert thousands after a man tested positive to COVID-19 after going to the Boxing Day Test and Chadstone Shopping Centre.

A Melbourne man who has COVID-19 after attending the cricket Test at the MCG and Boxing Day sales at Victoria's biggest shopping centre has sparked an emergency as authorities race to discover who he caught the virus from.

The mystery case was the only one outside of hotel quarantine in Victoria on Wednesday, and has prompted a scramble to identify its source for fear it could be linked to many others yet to be diagnosed.

The man, aged in his 30s, attended the second day of the Boxing Day Test at the MCG on December 27, where up to 30,000 spectators were at the ground.

He also was busy on a spree at Chadstone Shopping Centre on Boxing Day before he was ill.

The man and his close contacts are now isolating, and whilst it's not believed he was infectious whilst at the cricket or while shopping, the big concern is the source of the virus.

"We are trying to identify, a needle in a haystack exercise, of who might be positive," COVID-19 response commander Jeroen Weimar said.

Victoria's active cases have risen to 41 after more than 37,000 tests in the 24 hours to yesterday.

The man developed symptoms on December 30 and the health department was notified of his positive test result on January 5, Acting Premier Jacinta Allan said yesterday.

"Contact tracing that has gone on throughout the night has revealed he stayed home since 31 December and got tested."

"We're encouraging anyone who was at the cricket and who was seated in the Great Southern Stand, Zone 5, between 12.30pm and 3.30pm to go and get tested and isolate until they receive a result," Ms Allan said.

"A COVID-safe plan was in place at the MCG for this cricket event and excellent ticketing allocation system was put in place by the MCG."

Anyone who was seated within the Zone 5 bubble will receive a text message in the next couple of hours, advising them of the confirmed case and requesting they get tested.

Officials believe 2400 people were in Zone 5 at the MCG on December 27.

The man attended Chadstone Shopping Centre from 6am to 2pm on Boxing Day.

A total of 10 stores have been listed on the Department of Health and Human Services (DHHS) website as potential acquisition sites, including Culture Kings, Huffer, JD Sports, Jay Jays, H&M, Uniqlo, Myer, Superdry, Footlocker and Dumplings Plus.

"We're particularly interested in those who went to those stores on Boxing Day and who did not feel well — please come forward to get tested," he said.

"We will be identifying the time zones that the individual was in these stores.

"Again, we would encourage people to check in again during the course of the day."

Anyone who attended the locations during the times identified must get tested and self-quarantine until they receive a negative result, the DHHS website states. Additional testing sites will be set up to cater to the influx of people expected to come forward, including at the MCG.

Deputy Chief Health Officer Dr Allen Cheng said it is possible there may be a second cluster in the state, following news of the mystery infection.

"His household contacts have been spoken to, as well as visitors to his house and they'll be put into quarantine for the 14 days and tested," Dr Cheng said.

"The upstream contacts are the people that we're most concerned about. These are the people he has been in contact with in the 14 days prior to the symptoms starting."

The case is being retested and genomics are being undertaken on the initial sample.

The Victorian Government has processed and granted 295 exemptions for Victorians stuck in NSW to cross the border and return home.

Mr Weimar said staff in the exemptions team have been boosted to about 40 people to enable the process to move quicker.

More than 3000 requests to re-enter Victoria by January 31 are yet to be processed.

"I'm confident we're getting on top of the urgent critical cases now," he said.

"There'll be difficult decisions to be made, let's not shirk that, but we'll prioritise the urgent cases and get to those others."

Shoppers who visited a South Melbourne Nike store while a person with COVID-19 shopped inside are also on high alert.

Nike on Buckhurst Street in South Melbourne has been listed as an exposure site after a positive case shopped in store on December 30, between 12pm-12.45pm.

The DHHS has issued advice, directing anyone who visited the store between the times indicated to get tested and quarantine for 14 days from the date of exposure.

While anyone who visited Culture Kings Melbourne on Russell Street between 1pm-1.30pm on December 30 must monitor for symptoms.

Advice has also been updated for diners who attended Nandos Elizabeth Street in Melbourne on January 1 between 2am-2.30am, with all patrons ordered to quarantine and get tested.

Other risk locations recently added include Sri Lankan restaurant Tamarind 8 in Narre Warren, where a case picked up take away on December 30 between 6.30pm-7pm.

READ MORE: Why Australia is not rushing to approve a COVID-19 vaccine 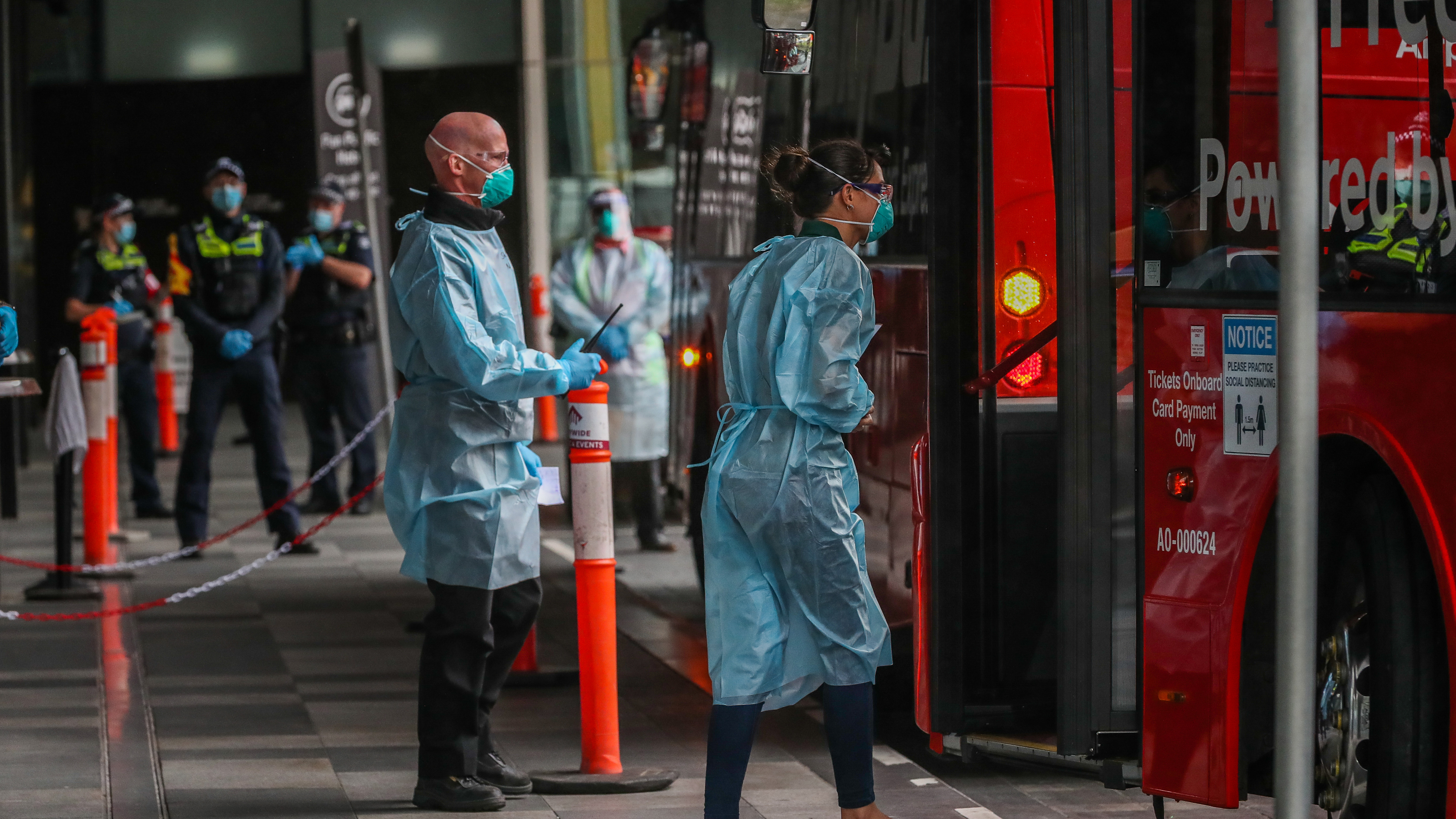 "It's important if there's an exposure site you have been at in those time windows, if you have any concerns you may have overlapped with a positive case, we would ask you to go and get tested and to isolate and contact us so we can work with you and support you to do the right thing and to ensure we can contain the spread of this outbreak quickly," Mr Weimar said.

The Tasmanian Government has classed the 18 locations in Victoria which are listed on the DHHS website as high-risk exposure sites as hot spots.

Travellers who have been in the areas during the specified dates and times have been locked out of the state, and must apply for an exemption if they wish to enter.

The Black Rock outbreak at the centre of Victoria's coronavirus flare-up spans across 14 households and contains 27 active cases, with no new cases linked to the cluster today.