Health authorities are bracing for the state to fall into the same coronavirus crisis crippling NSW after staggering scenes of thousands protesting in Melbourne’s CBD.

There was one new case acquired overseas, that is currently in hotel quarantine.

EXPLAINER: What the new lockdown means for regional Victoria

Sixteen of today's 65 local cases were announced yesterday, linked to the Shepparton area.

Health Minister Martin Foley said there was also a new case reported overnight, not in this morning's numbers, in the Mansfield area and linked to the Shepparton cases.

In addition to this, a person who underwent surgery at Royal Melbourne Hospital later tested positive for COVID-19.

"Please isolate, minimise transmission... please don't catch up together until we get out of this," Ms Matson said to younger people.

There are 27 people in hospital, with 12 in intensive care units and five on ventilators. A total of 26,149 vaccines were administered over the past day.

Mr Foley said the Victorian government is putting in place systems that will offer all public sector employees access to half a day's paid time off to each dose of the vaccine they receive.

In addition to this, he announced an aged care workforce vaccination blitz.

"We just need those remainders to come forward and get vaccinated," he said.

On Thursday, the government annouced a $807 million jointly funded package with the Commonwealth for metropolitan businesses in the state.

Minister for Industry Support and Recovery Martin Pakula announced a further $146.6 million to support up to 20,000 additional regional businesses through the business cost assistance program and the licensed hospitality venue fund.

He said there will also be another round of support payments for alpine businesses.

Health authorities fear the state is on course to fall into the same widespread crisis crippling NSW, after staggering scenes showed thousands protesting in Melbourne's CBD.

Even before the crowds converged yesterday, Melbourne's lockdown was broadened to include the entire state after cases were detected in regional areas.

An estimated 4000 people flooded the streets in the city centre yesterday, despite a heavy police presence and warnings of the potentially devastating spread of COVID-19 it may cause. 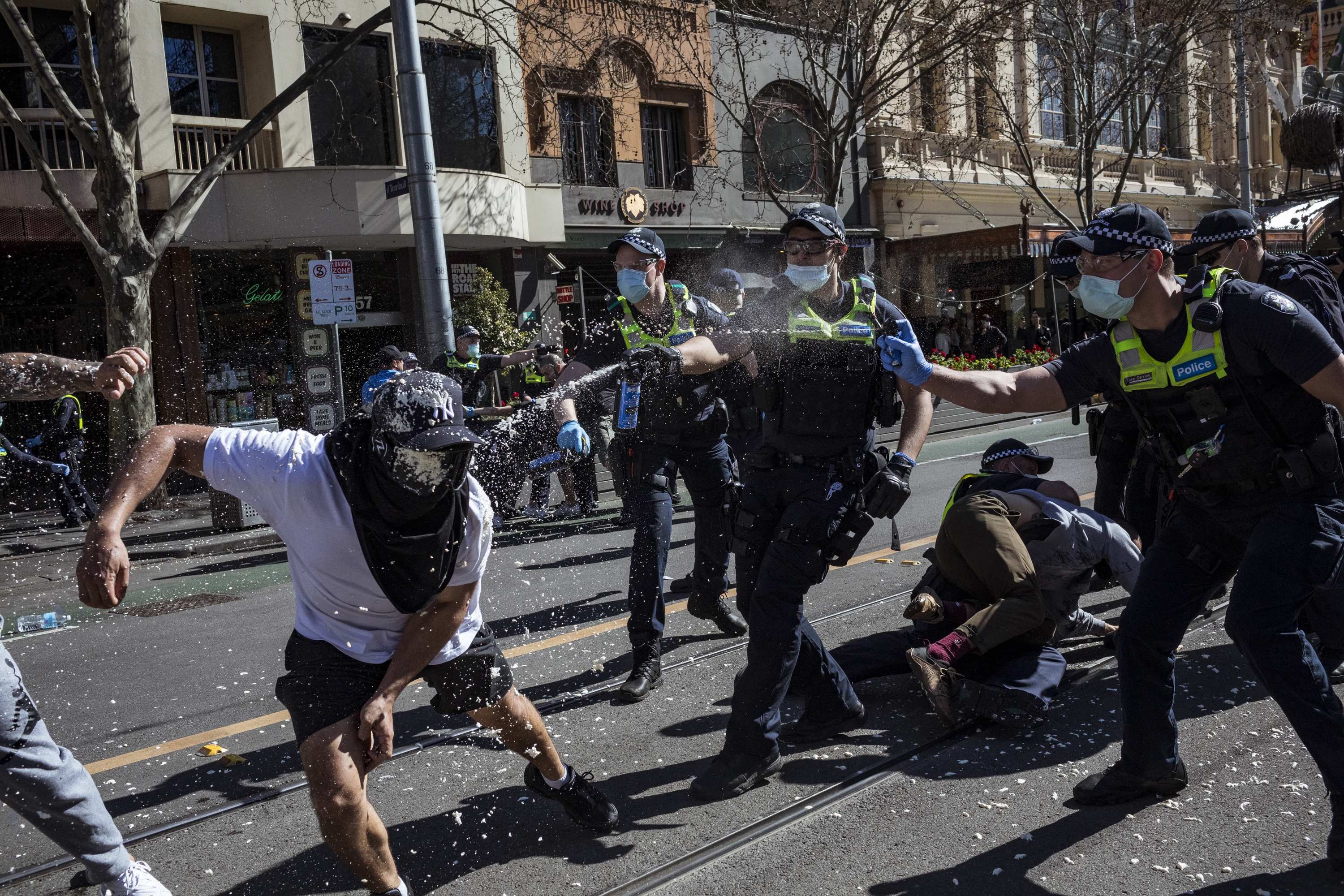 While the full impact of this anti-lockdown rally will not be known for about two weeks - a full infection cycle, it already has authorities, and the rest of the state, on edge.

More than $1 million in fines will be handed down, at least 218 people were arrested, and six police officers ended up in hospital as authorities lambasted abhorrent scenes.

"The behaviour seen by police was so hostile and aggressive that they were left with no choice but to use all tactics available to them," a Victoria Police spokeswoman said. "For the first time during lockdown protests, police were forced to use a range of non-lethal options including pepper ball rounds and OC foam cannisters in an effort to disperse the crowd.

What they claimed was "a freedom demonstration" was "anything but", Victoria Police Chief Commissioner Shane Patton said. "It's just selfish." The spokeswoman said "the majority of those who attended came with violence in mind".

The fear now facing health authorities is that cases will explode and contact tracers will be unable to control fresh outbreaks.

Mr Andrews had warned on Friday that if people ignored lockdown restrictions this weekend "well then next week it will be like Sydney", where cases have boomed to hundreds of new infections every day. There are 18 Victorians in hospital, and eight in intensive care, with two on ventilators.

"We note these numbers are starting to rise," Mr Weimar said.