The city’s new flood barrier system – which has kept it dry in recent weeks – were not raised, and the historic St Mark’s Square flooded again.

It was an event that was never meant to happen again.

After suffering centuries of flooding, Venice held back the sea for the first time in 1,200 years in October, thanks to the activation of its long-awaited flood barriers.

Tested for the first time in adverse conditions, their successful deployment kept the historic centre dry for the first time in the city's history. It meant that the devastating floods of 2019 -- which caused more than $1 billion worth of damage to the city -- should be a thing of the past. 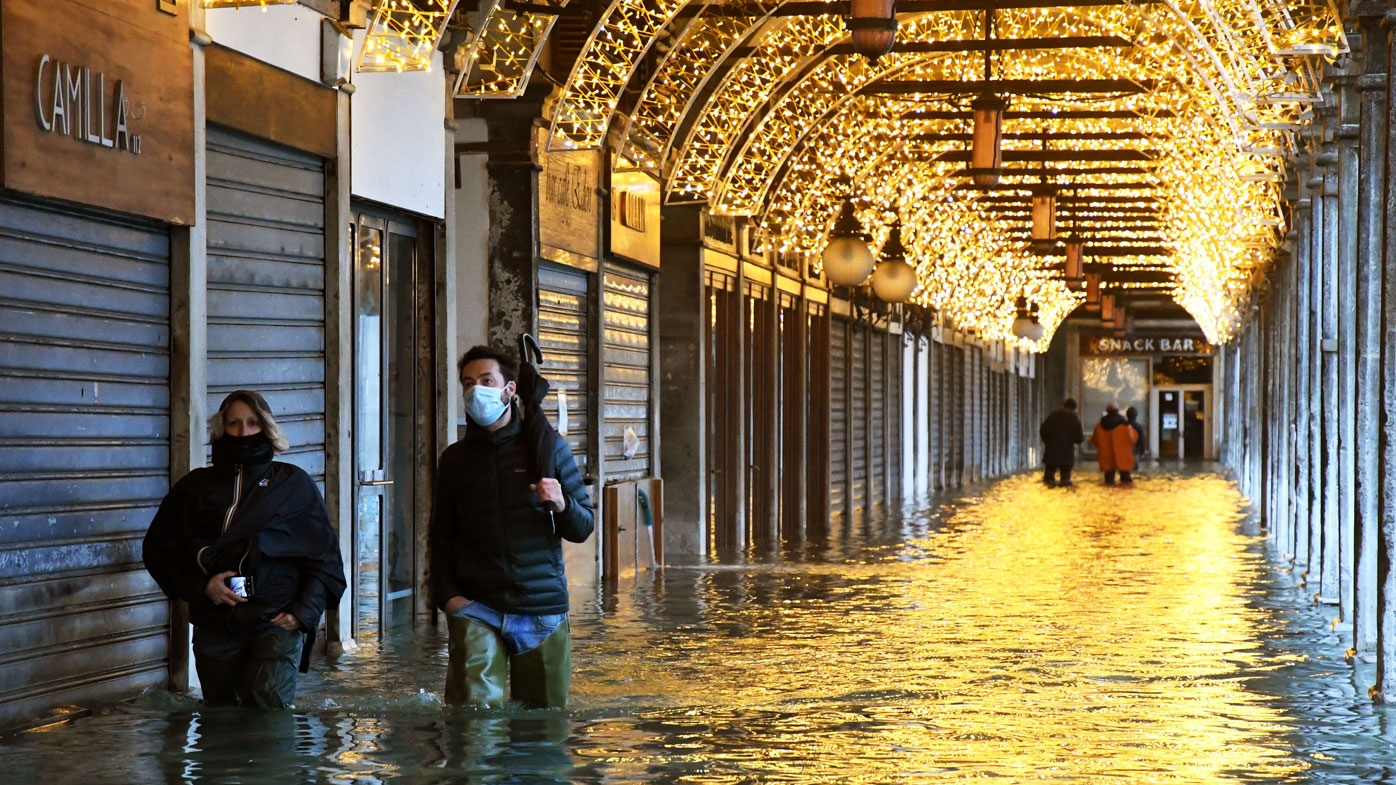 In the two months since its introduction, at the start of what would traditionally be the flooding season, the barrier system, known as MOSE, has been successfully activated five times -- including for a three-day period last week.

But on Tuesday, the barriers were not raised, and the city flooded again.

St Mark's Square, one of the lowest parts of the city, was particularly badly hit, with water thigh deep.

Claudio Vernier, owner of the Al Todaro bar and gelateria, and president of the Associazione Piazza San Marco, told CNN that it was a "dramatic and unexpected event, and one which we thought we had put behind us".

"We lived through it with great anger," he said. 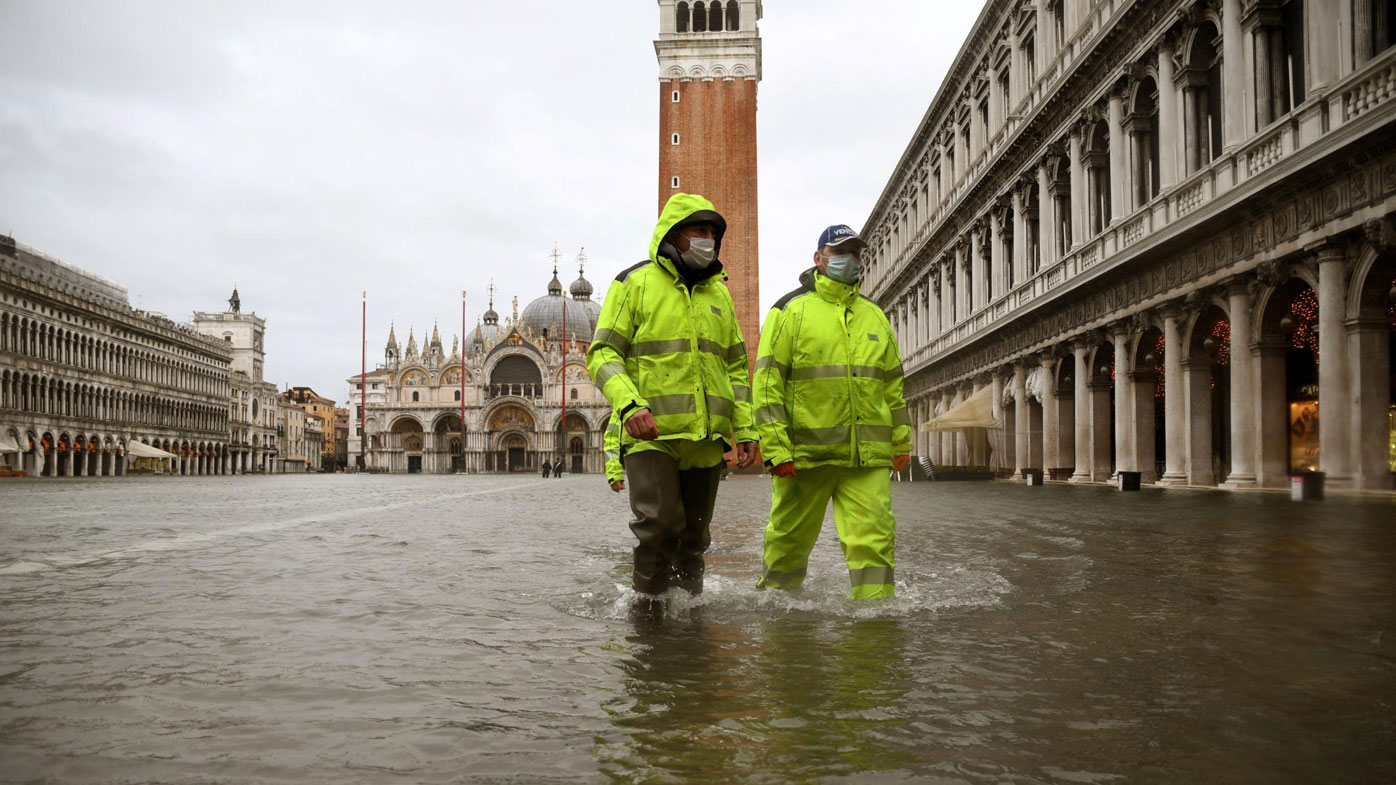 "It's damaging economically and morally, and it could have been avoided. We know the MOSE exists, we know it works, and it was not used."

The Byzantine Basilica of St Mark, which dates back to the 11th century, suffered "serious damage", according to Carlo Alberto Tessarin, on the board of the procurators of St Mark's, who oversee the church.

He told local newspaper Il Gazzettino that they were in a "terrible situation" and that the basilica "cannot take any more of this continual flooding."

"We're underwater to a dramatic extent, the damage is serious," he said. 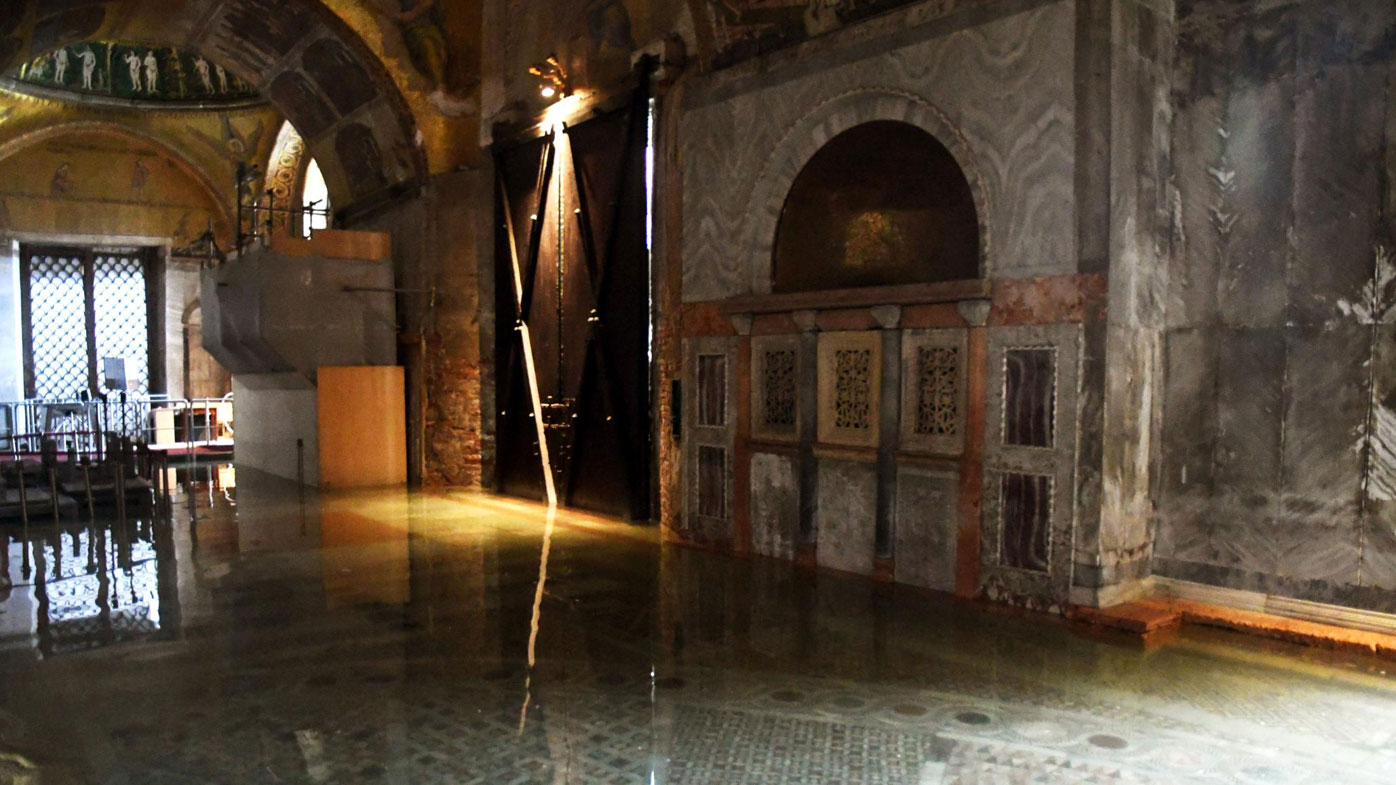 The church is still recovering from last year's flood, the salt water from which has eaten away at the marble-clad interiors. Even once the flood has dried up, marble absorbs the salt, which can spread up to seven metres, degrading the stone as it goes.

"The basilica is one of the most important works of art in the world, and it is being destroyed," Vernier told CNN.

Permission to raise the barriers

Until December 2021, the MOSE is officially in a trial phase, and, as such, is under the jurisdiction of the Italian state.

Once finished, the controls will be handed over to the Venetian authorities, but for the next 12 months, every time a high tide is forecast, they must request the barriers be activated by the national government.

The city's lowest parts, such as St Mark's Square, are built just under a metre above the average tide level. This means that they start flooding when tides reach just 90 centimetres above the average. The crypt of the basilica floods at just 65 centimetres. 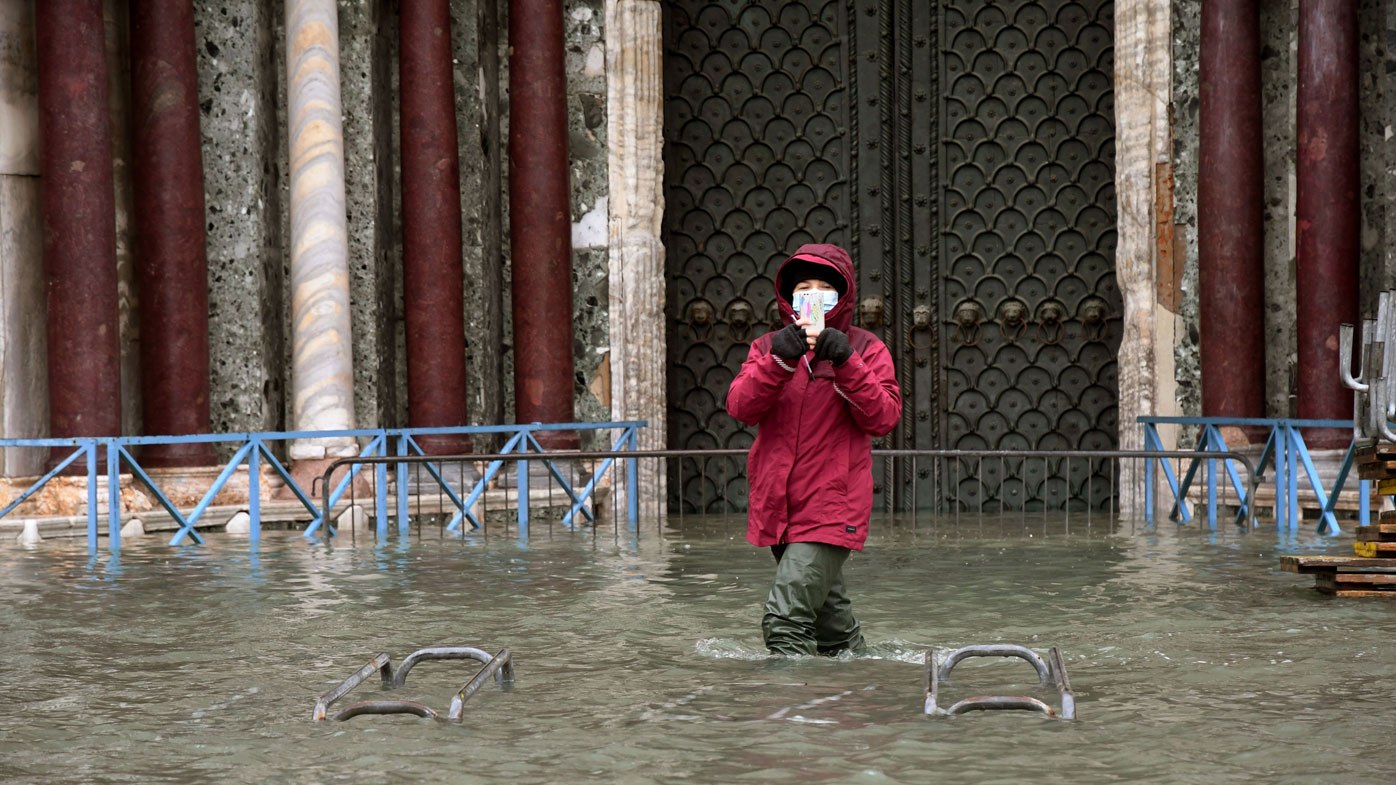 When the city authorities take charge, the barriers will be raised when the tide hits 110 centimetres above the average -- a level that already sees 12 per cent of the city underwater.

But while it is in its testing phase, it will be activated only when the tide is forecast to break 130 centimetres above the average -- by which time almost half of Venice is already under water. By this point, while it may be a centimetre or two in higher parts of the city, St Mark's Square is already knee deep.

On Tuesday, the tide level hit 138 centimetres above the average -- well above the level at which the barriers should be engaged.

But the weather forecast only predicted a tide of 125 centimetres -- just five centimetres below the level at which the barriers are automatically raised. The system was not activated.

As the weather worsened, city authorities sent out alerts to residents warning them to be prepared for flooding. The barriers take several hours to raise, and by the time it was clear how high the tide would be, it was too late to take action.

In the event, half the city was under water, even reaching the raised walkways in St Mark's Square, which are usually cantilevered over lesser flooding levels. 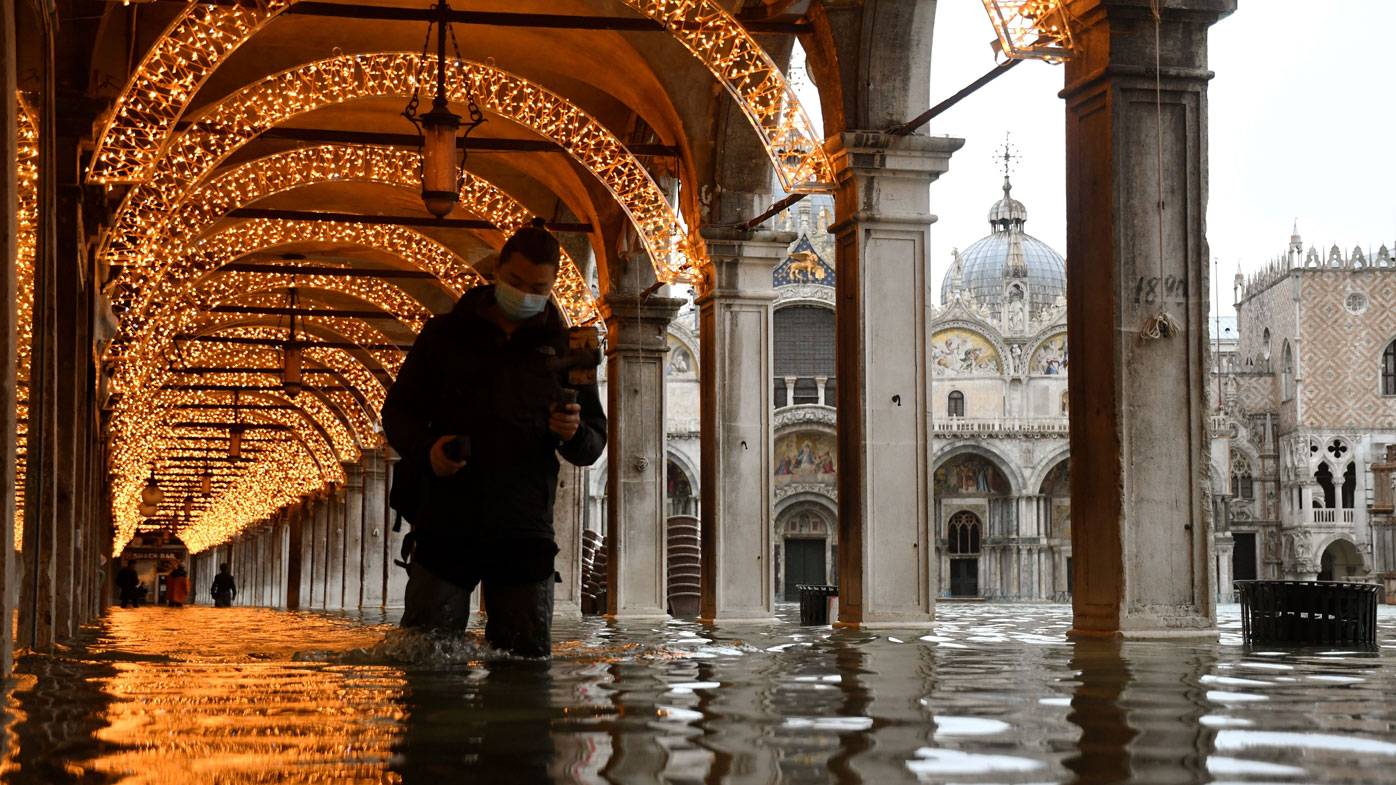 Vernier is convinced that it was the wrong decision, even at the time.

"Italy is having historically bad and unpredictable weather at the moment," he said, arguing that the authorities should have taken the precaution of raising the barriers.

"It's decided on the basis of a weather forecast, and no weather forecast is perfect. Five centimetres can make a huge difference, and cause enormous damage -- and that's what we saw yesterday."

In October, Sebastian Fagarazzi, co-founder of Venezia Autentica, a social initiative working to transform the impact of tourism, called the activation of the flood barriers "historic".

On Tuesday, however, he spent much of the afternoon lifting furniture and belongings off the floor, and mopping up after about two centimetres of water entered his apartment.

"Although that doesn't sound like much, it means that first you must lift up everything, and make sure nothing is on the ground," he said.

"Then you must wait for the water to come in, wait for it to go out, and then clean inside for hours -- you must clean the apartment over and over again.

"Then you wait for it to dry, and only then lower your belongings. You basically lose a whole day, just to be able to be in your house."

Mr Fagarazzi is still a believer in the MOSE, however. "I trust it 100 per cent but it won't stop climate change nor solve all the problems of Venice," he said.

"We hoped it [the events of last year] would never happen again, but since the MOSE isn't finalised yet, we knew that it could happen. Venetians have to hope for the best but prepare for the worst."

'We couldn't handle another'

"Acqua alta [flooding] has always been part of life in Venice," she told CNN. "Although events like yesterday are no fun -- they cause damage and waste time as we have to raise everything off the floor -- Venetians know how to handle it.

"What we couldn't handle would be another extreme flood as we saw last year.

"But with the MOSE working, even raising it at 130 centimetres, we should not see that again."

But she emphasises that the flood barriers are not the only thing required.

"Beyond the well-known phenomenon of the displacement of the local community, mass tourism is recognised to worsen the impact of climate change, and it is urgent that we work on transforming it now," she says.

Vernier says that when the MOSE was planned decades ago, it was estimated that it would need to be raised whenever the sea level hit 110 centimetres above the average -- which, at that point, happened a couple of times a year.

"Now with the worsening climate crisis, the water level is always higher, and we see that kind of tide level 20 times a year," he said.

The fight for control

With more bad weather expected over the next few days, the flood barriers were raised overnight.

A high tide of 123 centimetres was recorded on Wednesday morning, with 135 centremetres predicted for Thursday, and 140 centremetres for Friday. The MOSE will be activated for both.

In the meantime, the Venice authorities are seeking more of a say in the decision to raise the barriers.

"We need to ensure that it's the city deciding when to activate the MOSE," tweeted mayor Luigi Brugnaro.

He added that there was a pressing need to "shorten the chain of command."