The US will reopen its Consulate General in Jerusalem, a move that restores ties with Palestinians that had been downgraded by the Trump administration.

The US will reopen its Consulate General in Jerusalem, Secretary of State Antony Blinken announced Tuesday — a move that restores ties with Palestinians that had been downgraded by the Trump administration.

The consulate long served as an autonomous office in charge of diplomatic relations with the Palestinians. But former US President Donald Trump downgraded its operations and placed them under the authority of his ambassador to Israel when he moved the embassy to Jerusalem.

Trump's move infuriated the Palestinians, who view east Jerusalem as occupied territory and the capital of their future state.

Blinken did not give a precise date for reopening the consulate. 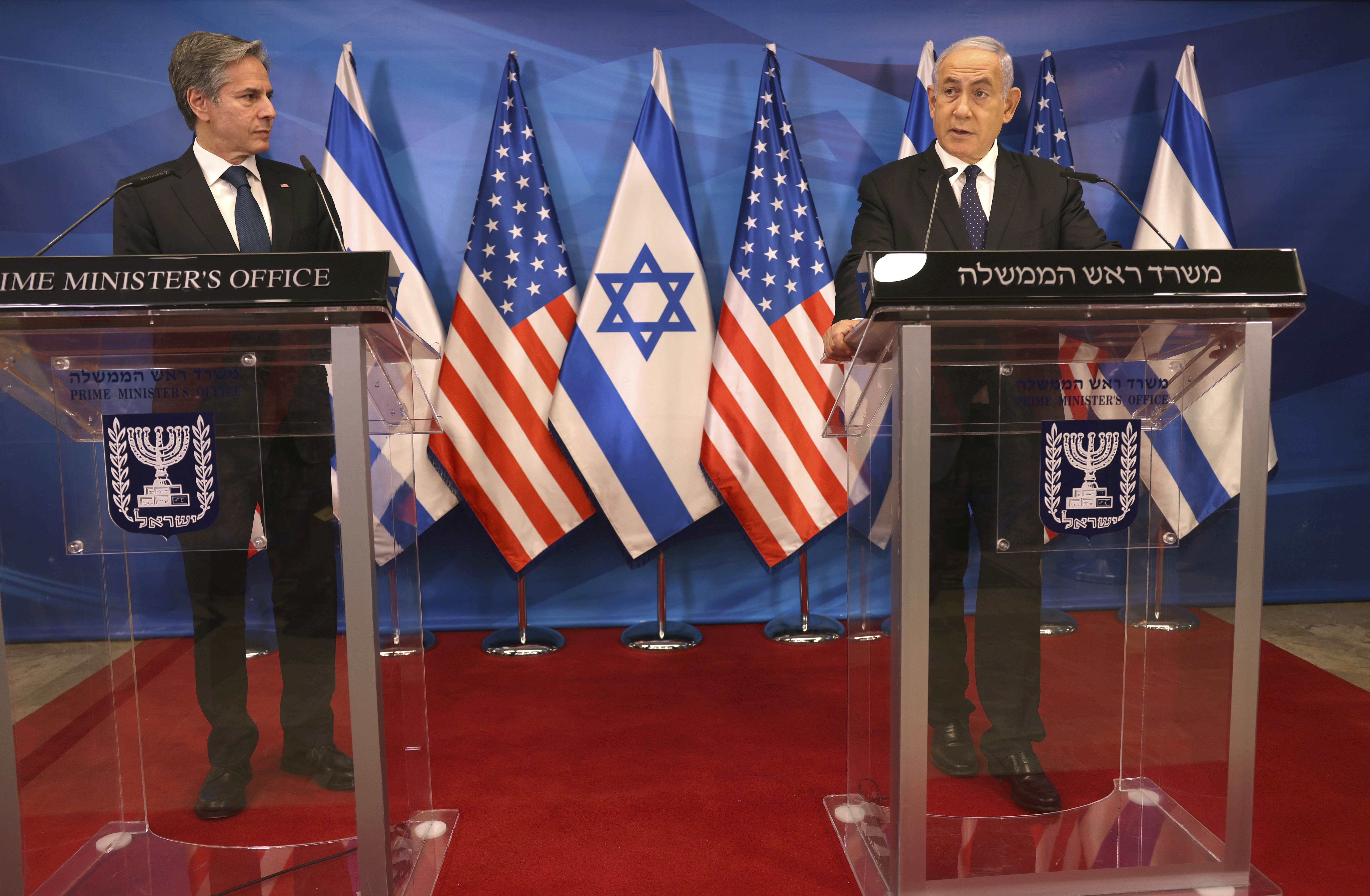 Blinken announced the step after a meeting with Palestinian President Mahmoud Abbas in Ramallah, in the occupied West Bank.

"As I told the president, I'm here to underscore the commitment of the United States to rebuilding the relationship with the Palestinian Authority and the Palestinian people, a relationship built on mutual respect and also a shared conviction that Palestinians and Israelis alike deserve equal measures of security, freedom opportunity and dignity," he said.

Blinken is in the region to help shore up the cease-fire last week that ended a devastating war 11-day war between Israel and Gaza's militant Hamas rulers that killed more than 250 people, mostly Palestinians, and caused widespread destruction in the impoverished coastal territory.

READ MORE: The frustration of young Palestinians is stronger than ever Blinken has promised that any assistance will be kept out of the hands of Hamas, which does not recognise Israel's right to exist and which Israel and the US consider a terrorist organisation.

The US is trying to bolster Abbas, who was sidelined by recent events, in his rivalry with Hamas and on the international stage. Abbas heads the internationally backed Palestinian Authority, which administers parts of the occupied West Bank but whose forces were driven from Gaza when Hamas seized power there in 2007.

Abbas is seen by many Palestinians as having lost all legitimacy. But he is still seen internationally as the representative of the Palestinian people and a key partner in the long-defunct peace process.

The truce that ended the Gaza war on Friday has so far held, but it did not address any of the underlying issues in the Israeli-Palestinian conflict, something Blinken acknowledged after meeting earlier in the day with Israeli Prime Minister Benjamin Netanyahu.

"We know that to prevent a return to violence, we have to use the space created to address a larger set of underlying issues and challenges. And that begins with tackling the grave humanitarian situation in Gaza and starting to rebuild," he said. 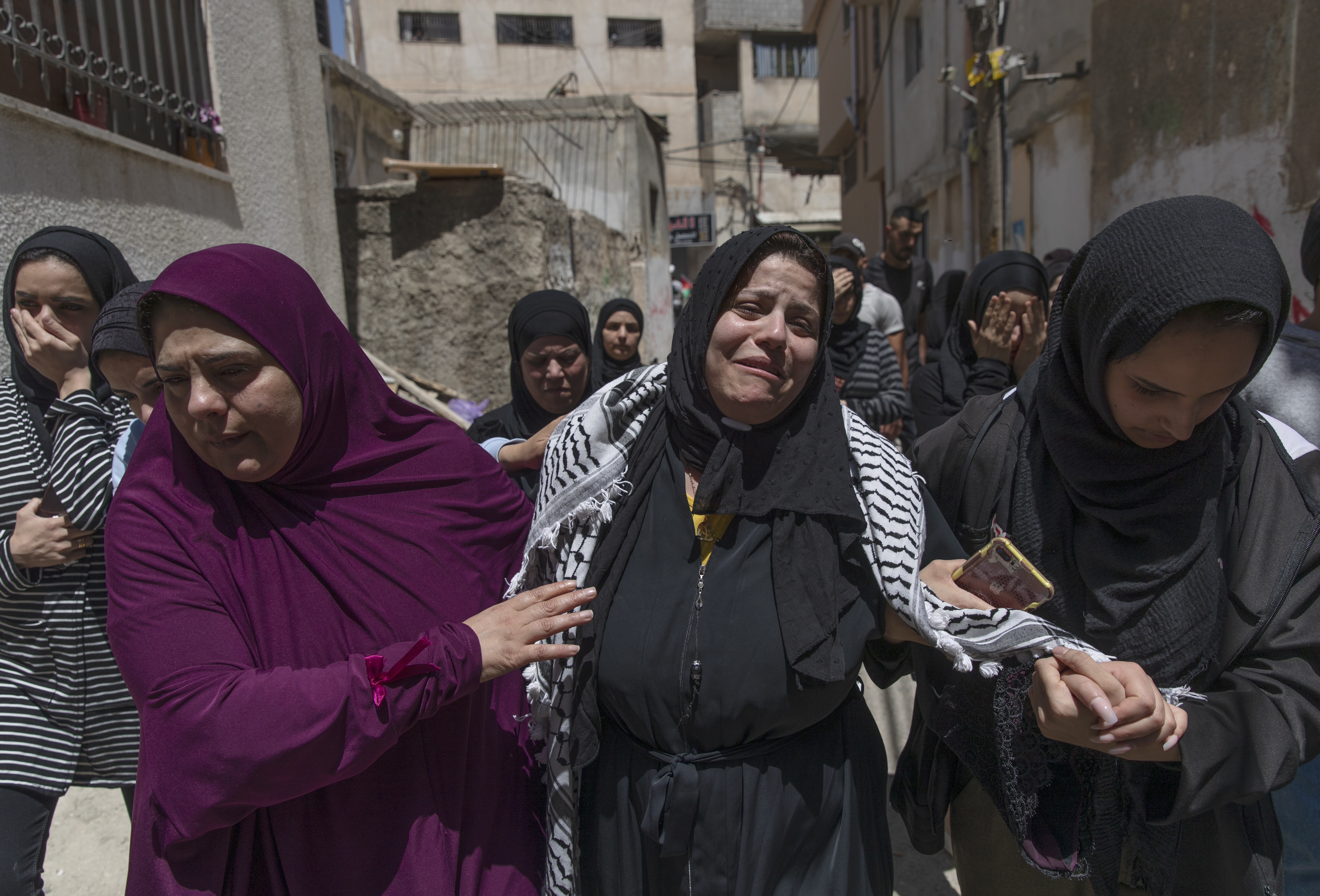 The top US diplomat faces the same obstacles that have stifled a wider peace process for more than a decade, including a hawkish Israeli leadership, Palestinian divisions and deeply rooted tensions surrounding Jerusalem and its holy sites. The Biden administration had initially hoped to avoid being drawn into the intractable conflict and focus on other foreign policy priorities before the violence broke out.

The war was triggered by weeks of clashes in Jerusalem between Israeli police and Palestinian protesters in and around the Al-Aqsa Mosque compound, a site revered by Jews and Muslims that has seen several outbreaks of Israeli-Palestinian violence over the years. The protests were directed at Israel's policing of the area during the Muslim holy month of Ramadan and the threatened eviction of dozens of Palestinian families by Jewish settlers.

The truce remains tenuous since tensions are still high in Jerusalem and the fate of the Palestinian families is not yet resolved.

The evictions were put on hold just before the Gaza fighting erupted, but the legal process is set to resume in the coming weeks. Police briefly clashed with protesters at Al-Aqsa on Friday, hours after the cease-fire came into effect.

Adding to the tensions, an Israeli soldier and a civilian were stabbed and wounded in east Jerusalem on Monday before police shot and killed the assailant in what they described as a terrorist attack. Then, early Tuesday, a Palestinian man was shot and killed by undercover Israeli forces near the West Bank city of Ramallah, according to the Wafa news agency. Pictures circulating online appeared to show the man bloodied and lying in the street. The Israeli army referred questions to the Border Police, which did not respond to requests for comment.

Netanyahu, meanwhile, is fighting for his political life after a fourth inconclusive election in two years. He faces mounting criticism from Israelis who say he ended the offensive prematurely, without forcibly halting rocket attacks or dealing a heavier blow to Hamas.

Netanyahu hardly mentioned the Palestinians in his remarks after his meeting with Blinken, warning of a "very powerful" response if Hamas breaks the cease-fire. 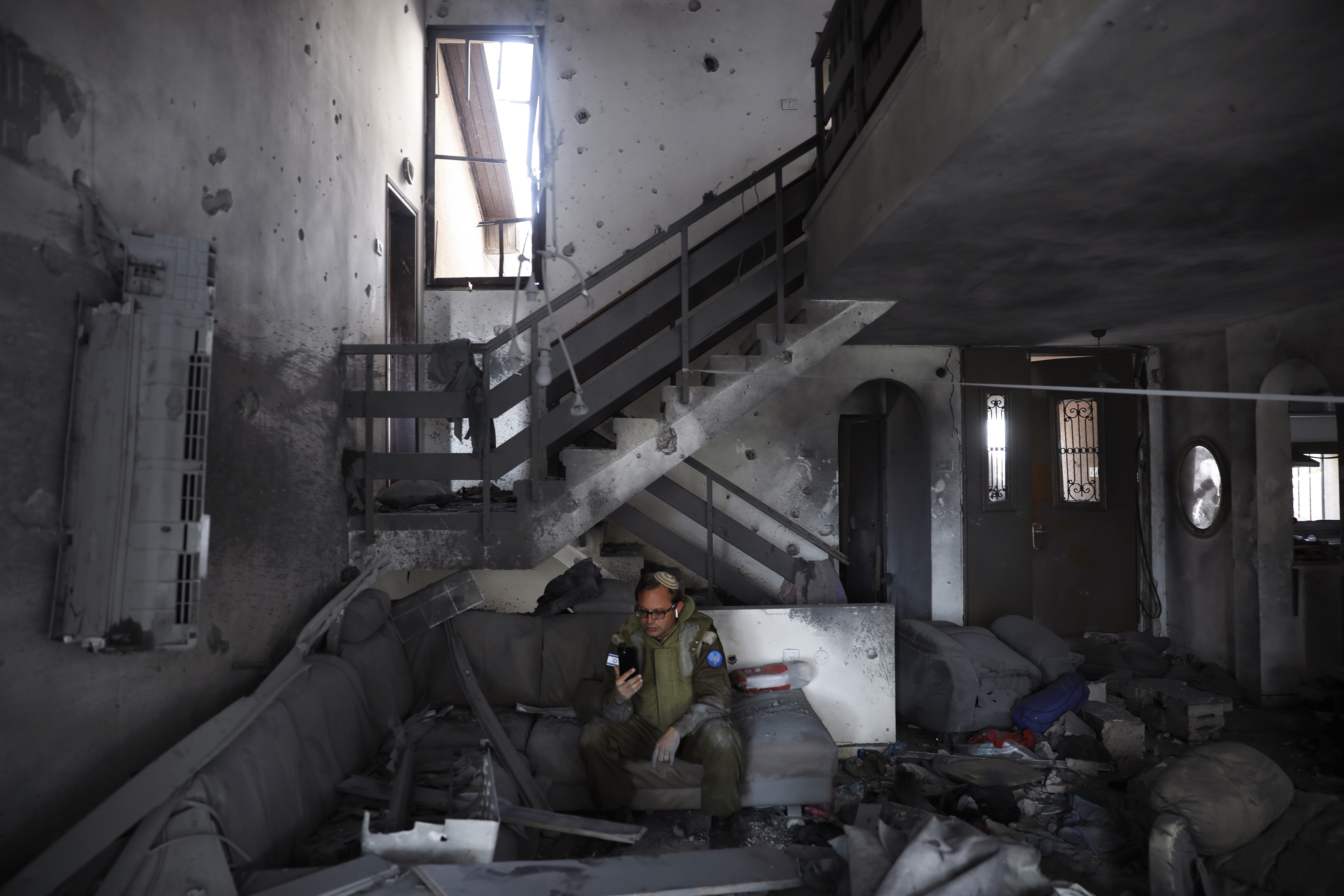 Netanyahu spoke of "building economic growth" in the occupied West Bank, but said there will be no peace until the Palestinians recognise Israel as a "Jewish state." The Palestinians have long objected to that language, saying it undermines the rights of Israel's own Palestinian minority.

Blinken will also visit neighbouring Egypt and Jordan, which have acted as mediators in the conflict. Egypt succeeded in brokering the Gaza truce after the Biden administration pressed Israel to wind down its offensive.

The administration had been roundly criticised for its perceived hands-off initial response to the deadly violence, including from Democratic allies in Congress who demanded it take a tougher line on Israel. Biden repeatedly affirmed what he said was Israel's right to defend itself from rocket attacks from Gaza. 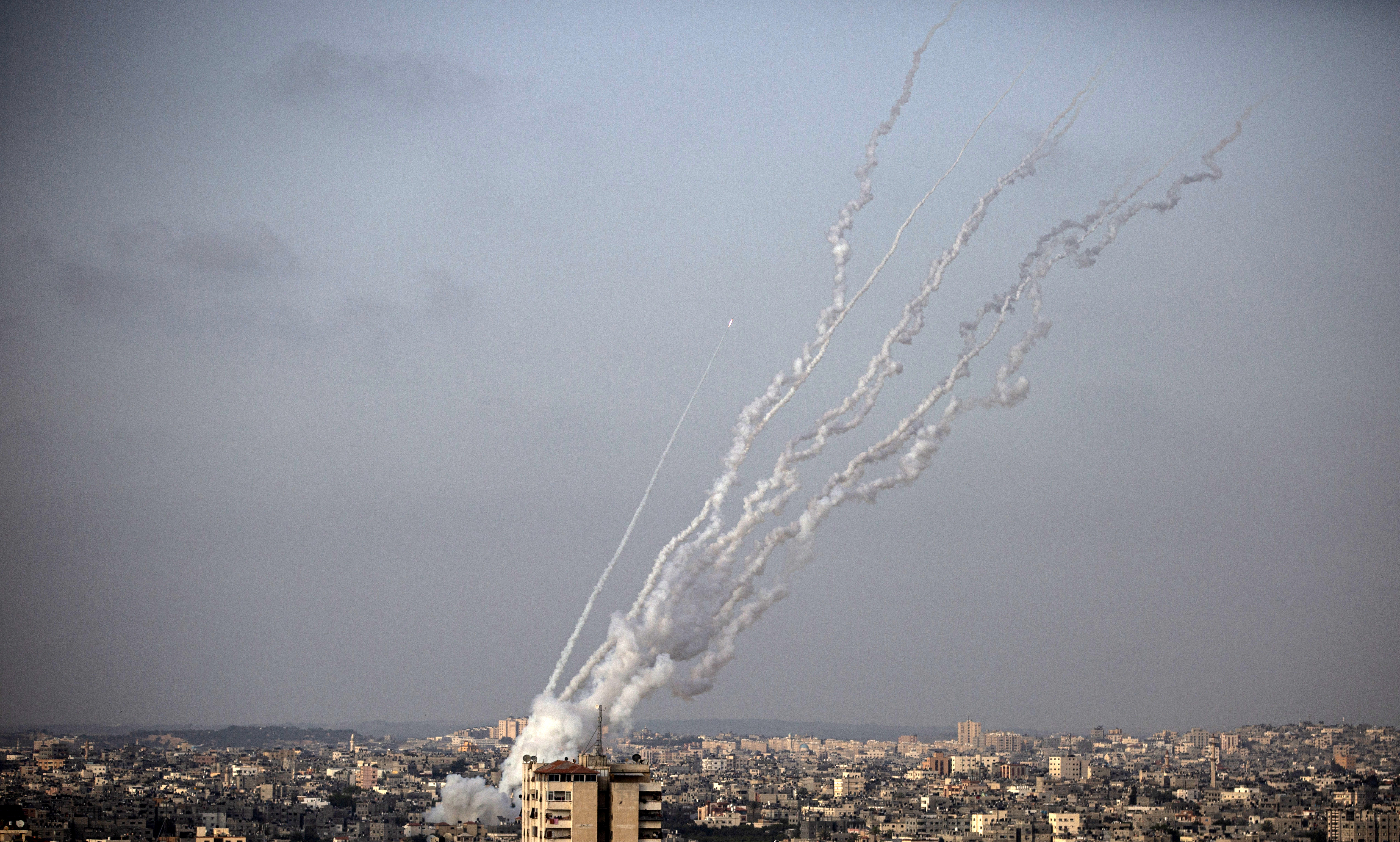 The administration has defended its response by saying it engaged in intense, but quiet, high-level diplomacy to support a cease-fire.

Blinken has said the time is not right for an immediate resumption in Israeli-Palestinian negotiations, but that steps could be taken to repair the damage from Israeli airstrikes, which destroyed hundreds of homes and damaged infrastructure in Gaza.

The narrow coastal territory, home to more than 2 million Palestinians, has been under a crippling Israeli-Egyptian blockade since Hamas seized power. Israel says the blockade is needed to keep Hamas from importing arms, while the Palestinians and human rights groups view it as a form of collective punishment.