A US judge has ordered Seattle police to temporarily stop using tear gas, pepper spray and flash-bang devices to break up largely peaceful protests, a victory for groups who say authorities have overreacted to recent demonstrations over police brutality and racial injustice.

The liberal city with a lengthy history of massive, frequent protests has taken hits from all sides — from demonstrators, some city officials, the president and now a judge — over the way it's responded to crowds taking to the streets following George Floyd's death at the hands of Minneapolis police.

Those on the right say the mayor and police chief aren't being tough enough on protesters who have taken over part of a neighbourhood near downtown Seattle, while those on the left say police tactics have been far too harsh. 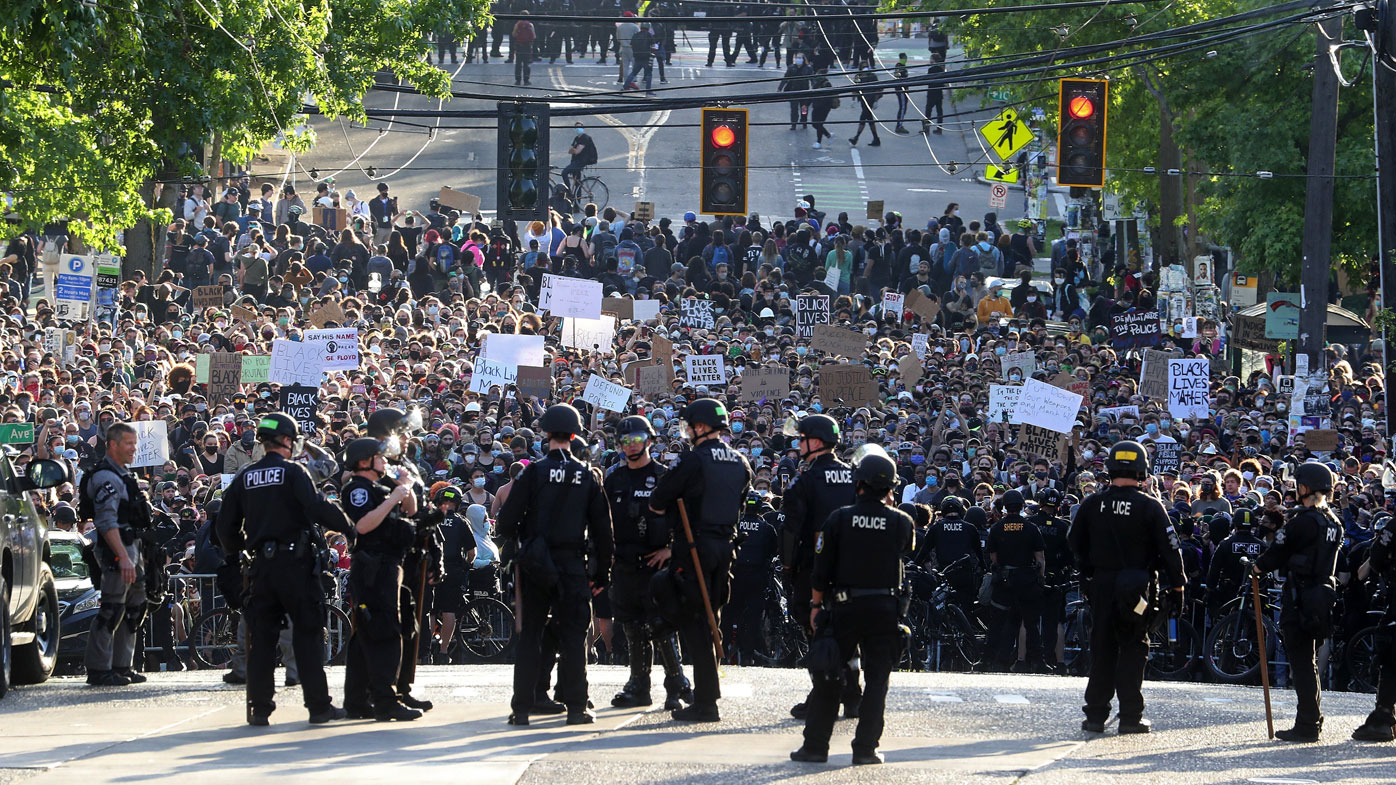 US District Judge Richard Jones sided with a Black Lives Matter group that sued the Seattle Police Department this week to halt the violent tactics it has used to break up protests.

Last weekend, officers used tear gas, pepper spray and other force against crowds of protesters. Jones' order halts those tactics for two weeks, though demonstrations this week have been calm.

Mayor Jenny Durkan and Police Chief Carmen Best have apologised to peaceful protesters who were subjected to chemical weapons. But Best has said some demonstrators violently targeted police, throwing objects and ignoring orders to disperse. Both have faced calls to resign, which they have rejected.

The judge said those objecting to the police tactics make a strong case that the indiscriminate use of force is unconstitutional. Jones said weapons like tear gas and pepper spray fail to target "any single agitator or criminal" and they are especially problematic during the coronavirus pandemic. 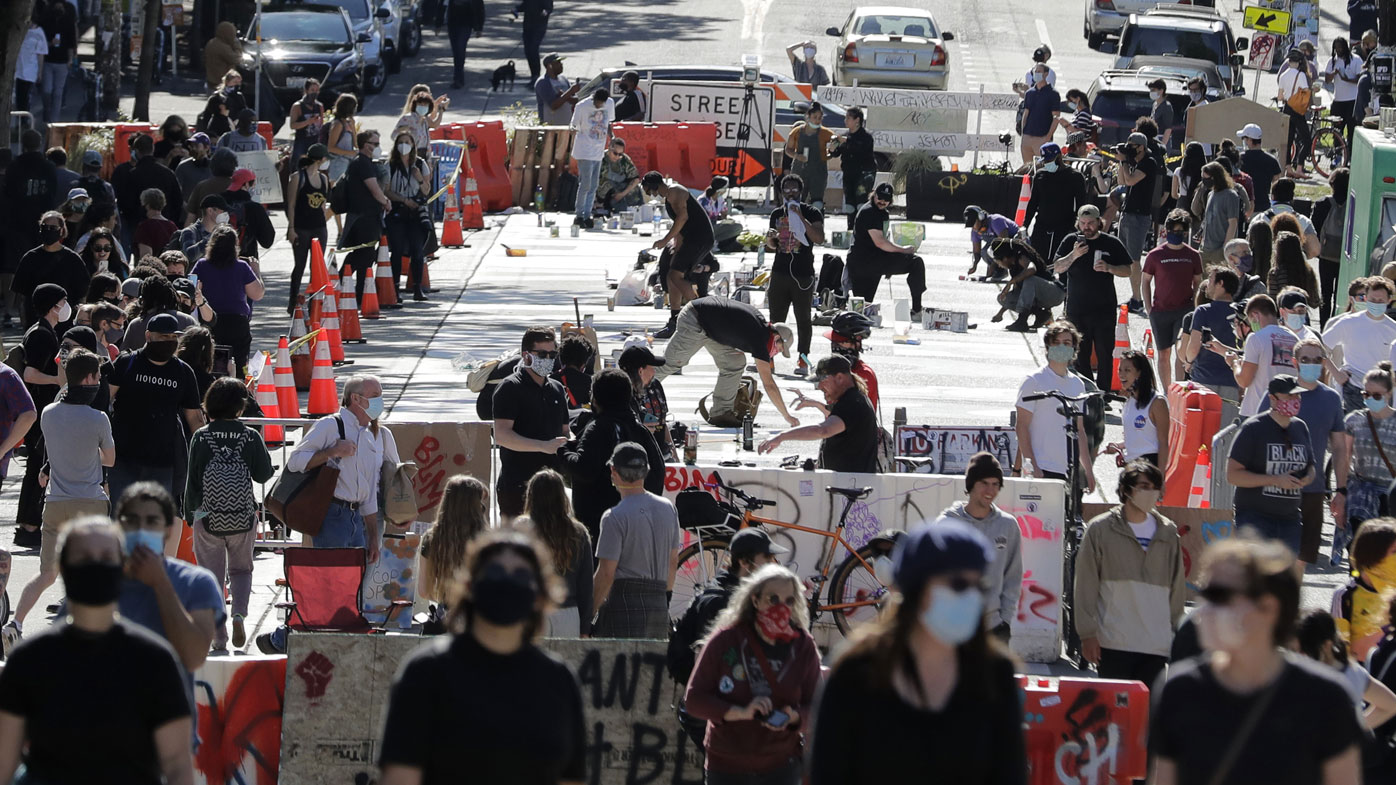 "Because they are indiscriminate, they may even spill into bystanders' homes or offices as they have done before," Jones wrote.

Durkan, a former US attorney, "believes the court struck the right balance to protect the fundamental constitutional right to exercise protest, with the need to also ensure public safety," spokeswoman Kamaria Hightower said in an email.

This week, demonstrators have turned part of Seattle's Capitol Hill neighbourhood into a protest centre with speakers, drum circles and Black Lives Matter painted on a street near a police station. Police largely left the station after the chaos last weekend, when officers tear-gassed protesters and some demonstrators threw objects at them. Police sprayed tear gas just two days after the mayor and police chief said they were temporarily halting its use.

Durkan tweeted that on Friday she visited the so-called autonomous zone — which has been criticised by President Donald Trump and where people, including officers, come and go freely. She said she spoke with organisers about moving forward and noted that she's always known Capitol Hill as a place for people to express themselves.

Trump has slammed her and Gov. Jay Inslee for not breaking up the occupation by "anarchists" and threatening to take action if they don't. Both have assailed his comments and say they're focusing on a peaceful resolution. The demonstrations have been calm since police left the area.

Michele Storms, executive director of the ACLU of Washington, said the group was pleased with the judge's ruling.

"The city must allow for freedom of speech and freedom of assembly, and it must address police accountability and excessive use of force," Storms said in a statement.

The ruling came as massive crowds marched in the rain and some businesses temporarily closed in response to a call from Black Lives Matter Seattle-King County to launch a statewide general strike.

"As tens of thousands of people were gathering today to march silently and in solidarity against police brutality and misconduct, the US District Court affirmed their right to protest, free from state violence. That is a victory for today," the group said in a statement.

Black Lives Matter encouraged supporters not go to work or to work from home Friday and to learn about local elected officials and issues. Organisers have demands for the city, county and state that include cutting at least $100 million from the Seattle police budget, ending cash bail and declaring racism a public health crisis.

Durkan tweeted that she and the police chief participated in the march, saying Best and her Police Department leaders have been working "incredibly hard to adjust and improve every day."