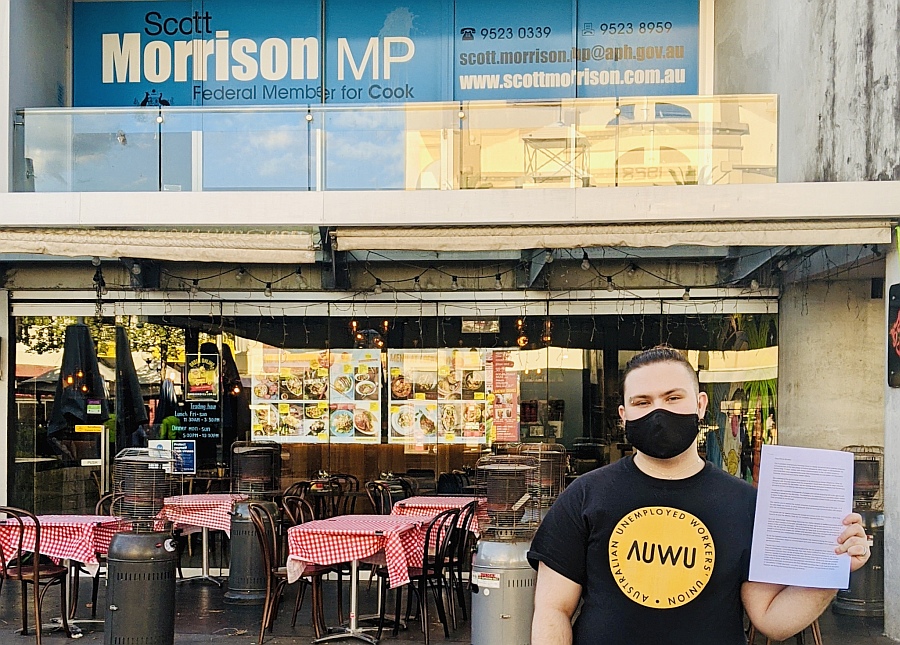 The way we ‘help’ the unemployed find work is broken, argues the AUWU, and we have a golden opportunity to fix it. Treating people with dignity is the first step.

Right now there are 1.6 million people on unemployment payments, plus another 700,000 on study or parenting payments. Before the pandemic, about 45% of those people were more than 45 years old, and more than 20,000 were older than 65, which until recently was the pension age. Only about 15% of people on these payments are under 25.

In Tasmania, there are 40,000 people on unemployment payments and 15,000 on a study or parenting payment.

There are currently 1,593 jobs available in Tasmania, and lots of those are for highly skilled workers like healthcare and legal professionals – qualifications you just can’t get overnight. Even if you include those skilled jobs, it’s still 25 people on unemployment payments for every job advertised.

What does an ‘unemployment’ provider do?

To get a payment you’re required to do activities called ‘mutual’ obligations, but they’re not mutual at all, because if you don’t do them you are cut off from your meagre income support.

First, you’re connected with a job agency or an unemployment agency as we call them. Job agencies have complete power over JobSeekers and are renowned for cruelty and unfairly penalising people.

They do something called ‘parking’ and ‘creaming’. If they decide you have a pretty good chance of getting a job they spend as little effort as possible on you. That means it costs very little to have you on their books. Yet even if you find yourself a job, they get an outcome payment, despite having done absolutely nothing to help you.

Then there are people who the job agency decides don’t have good prospects. They’re probably deciding this on the basis of something outside the person’s control, like where they live, whether they have a driver’s licence, education level, age or a disability or health condition (about 42% of people on JobSeeker before COVID had a disability or chronic illness).

If you’re in this ‘parked’ group then the job agency figures out how they can make the most money they possibly can, which means keeping you in the system long term, and cycling you in and out of insecure work to trigger outcome payments.

The types of activities you have to do include applying for a certain number of jobs – usually 20, but it will be 8 under the new rules coming in this week. So there’ll be millions of people being forced to apply for 2 jobs a week when there are no jobs.

None of this works and the government knows it. In 2014, before the latest round of punitive measures were introduced, on average people were stuck on this payment for 2 years and 2 months, trying to get by on half the poverty line. In 2019 the average Newstart recipient had claimed the payment for more than 3 years – so the program made things worse, and we weren’t even in a recession then.

It’s absolutely demoralising to know your prospects are so slim or to know that you have to apply for a job you’re not qualified for, just to get this poverty payment. And the sheer number of job applications is enormous. It’s a waste of energy for JobSeekers and contributes significantly to mental ill-health.

It’s also a waste of energy for the businesses that are flooded with these applications from people who just aren’t a good fit for the job they need to fill.

Another activity people are forced to do is go to pointless training courses, many of which make the job agencies money. You might be ‘taught’ what type of clothes you should wear, or how you should speak, or how to shake hands. It’s completely condescending and demeaning.

They also make people do ‘volunteering’ work, which means free labour for the organisations that participate, including big charities. So there are lots of older folks stuck out the back of churches sweeping and tidying up, which isn’t going to teach them any skills or help them get a job.

Then there’s the worst part of the system. Work for the Dole is forced labour. For an extra $10 a week you might be forced to go and do hard labour, which creates value for the organisation you do it for. However, you get as little as 40 cents an hour for that work. The job agency gets paid by the government, the host organisation gets paid by the government, but you get nothing.

The program is so dangerous that a report last year by Ernst and Young found that 64% of the sites didn’t meet the required health and safety standards. In 2016 a young man in Toowoomba died on a work for the dole site because he was put in a dangerous situation. His name is Josh Park-Fing.

It’s shameful, but the government gets away with it because most people don’t realise it’s going on.

Stories from Tasmanians in the unemployment system

The Australian Unemployed Workers’ Union regularly helps people in distress because of their job agency. The experiences below are by no means uncommon.

In the midst of the pandemic, an AUWU member was told they must attend interviews in person. They were lied to – no one is required to attend activities in person, including in the next phase of MO reintroduction starting 28 September. These rules are designed to keep everyone safe. The person who reported this experience suffers from a chronic health condition and is already working part-time. The job agency also tried to force them into a training program to learn how to ‘work with vulnerable people’, which is unrelated to their skills and job.

A man who was at risk of homelessness was told he must attend appointments with his job agency every 12 days. He was breached for not attending an appointment, even though job agencies are not supposed to penalise anyone if they have a reasonable excuse for not completing an activity. This type of bullying is dangerous – people get cut off their payment when they are most vulnerable.

One person received a phone call from their job agency at 6pm telling them they had to turn up for a new work opportunity the following morning at 7am. Wearing work boots they didn’t have and couldn’t afford anyway. The JobSeeker said the job agency was ‘furious’ when they said they were concerned because there was no public transport or car available to them. The person was reported for non-compliance. After a painful process of lodging a complaint through the ombudsman the job agency’s decision was overturned.

These are just three stories from the thousands that are shared with the AUWU every year.

Money for nothing, cruelty for free

In the Saturday Paper a couple of weeks ago Rick Morton reported that job agencies will get about half a billion dollars of public money this year. Per Capita released a report this week showing that job agencies may make up to $2 billion next year. The value of tax cuts going to big businesses in the budget is $160 billion.

And that’s while the rate is being slashed back down to half the poverty line.

But there are no jobs – so what are job agencies even being paid for?

What could we do to ensure dignity for unemployed Tasmanians?

A really important story to come out of the pandemic is how the increased payment and lifting of onerous ‘mutual’ obligations requirements, has made so many people feel equipped to look for meaningful work for the first time.

The lack of financial penalties since April has lifted a lot of stress and anxiety job seekers have been forced to manage in their lives. They haven’t had to deal with toxic job agencies, and they’ve had enough food.

We know unemployed people want to work if they can – remember that many disabled people are stuck on unemployment payments, and might not be able to work many hours, if at all. For decades the government considered 5% unemployment to be ‘full’ employment. That means they plan for people to be out of work, but refuse to treat them with humanity.

There is so much work to be done. There has been underinvestment in schools, TAFE, healthcare, aged care and so many other things that contribute to our community. We want the government to invest in communities and create jobs that benefit us all. Those jobs must be at fair pay, have good conditions, and safe work environments.

The AUWU believes the only moral thing for the government to do is ensure that no one lives in poverty.

We should all be able to eat and afford the basics in life.

All social security payments must be above the poverty line.

Marina Chapman and Kristin O’Connell are volunteers with the Australian Unemployed Workers’ Union. The AUWU is run by the unemployed for the unemployed. The union provides free services to people on Centrelink payments to help them know and assert their rights.