An Uber driver in San Francisco filmed an unmasked passenger coughing on him, grabbing his cellphone and tearing off his face mask as she and two other passengers scream profanities at him.The driver, Subhakar Khadka, said one of the women pe… 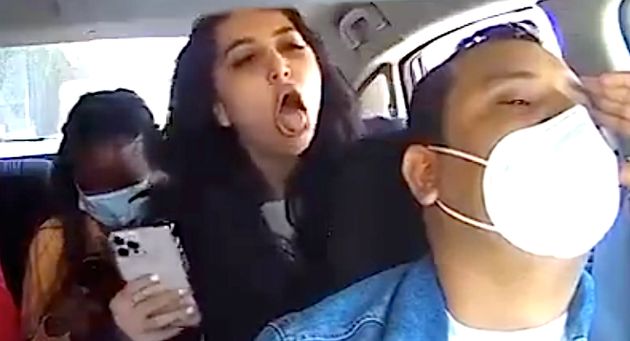 An Uber driver in San Francisco filmed an unmasked passenger coughing on him, grabbing his cellphone and tearing off his face mask as she and two other passengers scream profanities at him.

The driver, Subhakar Khadka, said one of the women pepper-sprayed him as they left the vehicle, a San Francisco police spokesperson told HuffPost. Khadka told KPIX the passengers targeted him for being a South Asian immigrant and yelled racist slurs as he tried to get them to leave his car.

Uber called Sunday’s attack “appalling” and said it suspended the account of one of the women, KPIX reported.

UBER RIDERS COUGH ON, ASSAULT, PEPPER SPRAY DRIVER
Driver Subhakar Khadka, who is South Asian, says he believes he was targeted because of his race. He picked up 3 women in the Bayview yesterday afternoon on San Bruno Avenue. https://t.co/Tzr7kTfyKQpic.twitter.com/f8PiHDZ9CZ

Khadka, from Nepal, said the trouble started when he pulled over because one of the women refused to wear a mask. He drove to a gas station so she could purchase a face covering, but the abuse began even before they arrived, he told the station.

In his video posted to Twitter, one woman leans toward him from the back seat and coughs on him. She also grabs his cellphone from his hands and tears off his mask while her companions loudly harass him.

After they stepped out of the car, one of the passengers “reached into an open window and sprayed what is believed to be pepper spray into the vehicle and towards the driver,” San Francisco police spokesperson Adam Lobsinger said in an email.

READ:  Wildfires across three US states kill at least 24

“These guys are animals to treat another human being like this,” Khadka told the TV station.

Police asked for the public’s help in identifying the passengers.

Hate crimes against Asians in the United States have increased markedly during the pandemic, and many are occurring in the Bay Area, according to reports.