“Kosher salt will die,” said New York gourmet grocery store owner Mark Bitterman, half-jokingly. A self-described “salt-melier,” Bitterman has been in the business of salt since 2006, when he first openedThe Meadow, which carrie…

“Kosher salt will die,” said New York gourmet grocery store owner Mark Bitterman, half-jokingly. A self-described “salt-melier,” Bitterman has been in the business of salt since 2006, when he first openedThe Meadow, which carries, among other products, close to 120 types of salt.

Years of devotion to his craft and a deep analysis of the food world have convinced Bitterman that, although society’s craze for processed salts was “understandable at the beginning of the 20th century because mechanised manufacturing and the birth of the chemical industry promised to bring safety and reliability to our food supply,” times have changed. “We prefer whole, handmade, sustainable products,” he told HuffPost.

That being said, the guru acknowledges that the vast majority of home cooks — and professional chefs — still rely on the less expensive, and more processed, salts that they find at the grocery store: kosher, table and sea salt. That, he said, is ironic, given the general public’s relatively recent outcry for all things natural. “We have farm-to-table ingredients,” he said. “But they are seasoned with chemical, factory-to-table salt.”

The solution? Education. Although there are innumerable varieties of salt available around the world, we’ve focused on the six most common ones to tell you which are the most (and least) processed. 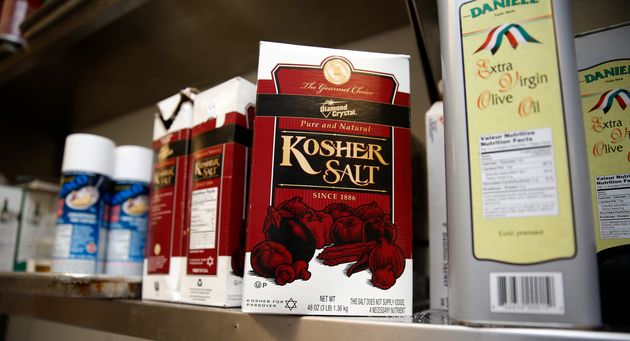 Although one of the most widely recognized types, kosher salt happens to be the most processed one available. Filled with anti-caking agents but no iodine — which, ironically, is the mineral that humans mostly need when consuming salt — kosher salt is a product that mostly caters to non-food-related businesses. “Only a small fraction of the salt that is made in the world is sold for food,” said Bitterman, mentioning the pharmaceutical and chemical industries as the two major consumers.

Given its lack of natural minerals, what contributes to kosher salt’s appeal?

Bitterman attributes its massive popularity to what he calls the “cult of chefs.” Ubiquitous, easy to use and with a texture and feel to it, it’s the go-to choice for chefs of all stripes because, according to Bitterman, “You can grasp it with your fingers and swing it off,” which allows for the speed and confidence that working in a professional cooking environment requires.

“When is the last time you saw a chef use a teaspoon to season something?” Bitterman asked rhetorically. “There is something profoundly unstrategic in picking kosher salt as your salt,” he said, inviting cooks to reconsider their logic.

The main difference between kosher salt and iodized table salt is the products’ textures: the former is flaky and the latter a cubic crystal. “If you try to pinch table salt with your fingers, it dissolves, which is why chefs don’t use it,” Bitterman said.

READ:  US weapons giant awarded $4b deal for missiles to Saudi Arabia

Although also heavily processed, table salt does boast a cocktail of chemicals — sodium ferrocyanide, calcium silicate and sodium aluminosilicate, among others — that renders it a tad-bit more wholesome than kosher salt.

Similar to the first two on the list, sea salt is made using solar energy, a fact that compels Bitterman to rank it a notch above sea and kosher salts. “The primary energy that goes into kosher salt and table salt is natural gas or some fossil fuel,” he said. “The method for making sea salt results in a highly pure sodium chloride.”

Bitterman is adamant about the vast difference between Maldon and the previous three types of salt. “Maldon is delightful,” he said, after mentioning that he doesn’t carry kosher, table or any other types of sea salt at his shop.

One of the most popular and commonly available brands of flake salts in America, Maldon offers a very clean and pure taste. But be careful how you use it: “You wouldn’t really want to dump Maldon into your pasta water,” Bitterman said, explaining that the salt’s crystal is very delicate and would likely dissolve in the process of cooking.

The best way to use Maldon, then, is as a finishing salt.

Fun fact: Himalayan salts actually don’t come from the Himalayas. “It all comes from the Punjab province of Pakistan, about 100 miles south of the Himalayas,” Bitterman said.

Natural and unrefined, pink Himalayan salt is hauled out of the mountain either by dynamite or a process that involves more traditional cutting techniques. It’s manifestly unrefined and placed in a jar for sale right after being ground up.

“The reason why I rate it a little bit lower than fleur de sel is because the crystals are ground up by machines,” he said. Straight out of the mountain, this particular salt is hard to be consumed as-is, hence the mechanical grinding that ensues. That being said, “It’s not bad for you at all but, when you get to the creme de la creme of salts, it’s slightly different.” What makes fleur de sel — one of the least processed salts out there — incredibly special is the excavation that it entails. “Fleur de sel is made by taking seawater from the ocean, bringing it into a big open pond and letting it settle,” Bitterman said. “Then you pass it from one pond to another to another and, as it goes [through the flow], you evaporate the water out of it.”

The process is entirely natural, strictly utilizing the power of the sun to evaporate the seawater, which is made of only 3.2% salt.

When asked about the top producers of fleur de sel across the world, Bitterman doesn’t hesitate: “The sea salt making tradition in the west coast of France is the oldest economic enterprise on earth,” he said. “It’s the only business that’s never changed, it’s still done the same way that it was done in medieval times.”