US president Donald Trump pledged to disrupt Iranian efforts to obtain nuclear material, announced additional sanctions on Iran, and said the US wouldn’t escalate conflict with the country.Trump addressed the nation Wednesday for the first time s…

US president Donald Trump pledged to disrupt Iranian efforts to obtain nuclear material, announced additional sanctions on Iran, and said the US wouldn’t escalate conflict with the country.

Trump addressed the nation Wednesday for the first time since ordering an airstrike that killed Iranian Gen. Qassem Soleimani last week, which prompted Iran to fire more than a dozen ballistic missiles at two Iraqi bases housing US soldiers on Tuesday night.

He said Tuesday’s attack did not result in any American or Iraqi casualties, and the damage sustained at the bases was “minimal.” 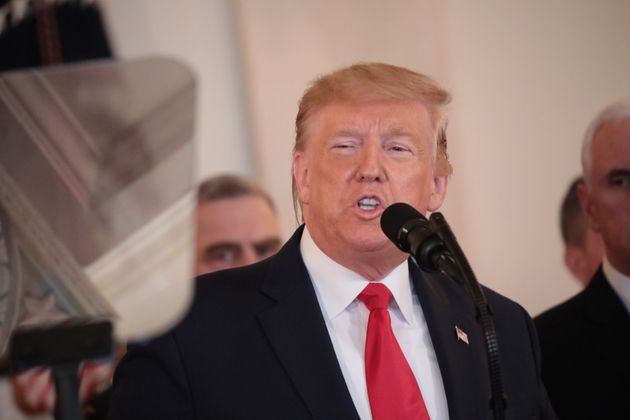 Several Trump administration officials told CNN they believed Iran may have intentionally targeted areas so as to avoid American casualties, signaling an attempt to deescalate the crisis.

That analysis dovetails with a statement from Iranian Foreign Minister Javad Zarif, who positioned the missile salvo as a defensive measure.

“We do not seek escalation or war, but will defend ourselves against any aggression,” he tweeted after the attack.

Iran launched over a dozen ballistic missiles at Iraqi military facilities housing US troops on Tuesday night, an act of retaliation for the US airstrike that killed Soleimani last week. Soleimani’s death has brought renewed volatility to the standoff between the U.S. and Iran as leaders of both countries threatened each other with destruction and reprisal attacks in the days after the airstrike.

Iran targeted two main locations in the strike ― a base in Erbil and the Al Asad Air Base, which officials said was hit with 17 missiles.

The US and Iran have been engaged in an escalating series of clashes since the Trump administration withdrew from the 2015 nuclear deal back in May 2018, sometimes nearing open conflict during the disputes. But the US assassination of Soleimani, a top Iranian military official who was central to its foreign policy and operations abroad, marked the most dramatic rise in tensions yet.

Iran’s Ayatollah Ali Khamenei threatened “forceful revenge” against the US after Soleimani’s killing, and proclaimed after the missile strikes on Wednesday that the “corrupt presence of the United States in the region should come to an end.” Iran also earlier announced on Sunday that it would step further away from agreements under the 2015 nuclear deal meant to curb its nuclear weapons program.

Although both Trump and Iranian officials appeared to not push for further ramping up of the conflict following Iran’s strike on Iraqi military facilities on Tuesday, neither has there been a dramatic deescalation in the dispute. Trump tweeted that “all is well” after the attack and proclaimed that the US has the most powerful military in the world. There are over 5,000 US troops deployed in Iraq as part of the operation against the Islamic State militant group.