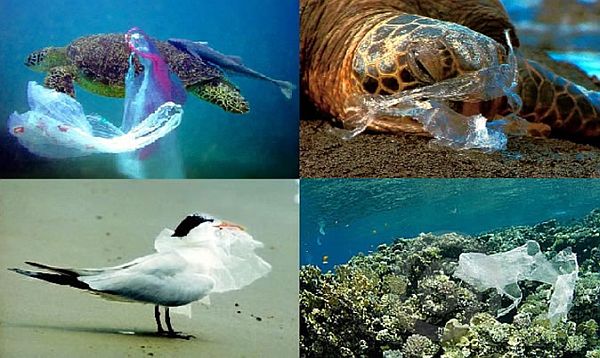 Researchers and companies are working on new kinds of biodegradable packaging, bottles and other products that break down like compost.

Plastic is kind of a wonder material. It’s cheap, light and durable. But the reason it’s so great is also why it can be the worst. It’s so cheap that it’s discarded with nary a thought. It’s so durable that it can persist for centuries, filling landfills and spilling into the oceans, where it is eaten and propagates up the food chain. Plastic breaks down into bits of microplastic that fill bird and fish stomachs, causing them to starve, and sops up toxic pollutants, which can poison wildlife when ingested.

While we can and should use much less plastic, we probably can’t forgo it altogether. Plastic packaging, for example, keeps food fresh — crucial for feeding the world. So researchers and companies have been developing biodegradable versions of the material. They’re producing these materials from plants and — in pushing toward a future when everything is recycled and nothing is wasted — even food scraps and sewage. Unlike traditional plastics, which retain their chemical structure even when they break down into smaller pieces, these biodegradable plastics decompose into molecules that can safely reintegrate into the environment.

But not all biodegradable plastics are created equal, and much of the challenge is to design, or identify, the right material for the job.

Traditional petroleum-based plastics can have several fates. Products such as bottles or cell-phone cases may be created again; some recycled plastics are transformed into lower-grade materials like plastic “wood” for benches. Other items are recovered for burning in incinerators that provide energy for industry, such as in cement factories. A hefty portion of plastic is used once and then goes to landfills or escapes into the environment. Addressing the end-of-life phase is the goal of many researchers working on creating biodegradable polymers.

Many environmentally friendlier plastics are already in the market, including plastic cups and bottles made from plants. Compared with traditional, petroleum-based plastics, these bioplastics are an improvement. They have a smaller carbon footprint — they don’t release extra carbon that’s been locked up in fossil fuels — and are based on renewable resources. But just because something is made from plants doesn’t mean it’s biodegradable: Some bioplastics aren’t, while some petroleum-based plastics are, says Ramani Narayan, a chemical engineer at Michigan State University.

Plastics consist of long molecular chains called polymers, made up of repeating subunits strung together. Whether they’re biodegradable depends on the strength of this chain. For common plastics like the polyethylene and polypropylene used in bags and bottles, or the polystyrene that’s commonly known as Styrofoam, the links of the chain are particularly strong.

“It’s like a string of pearls,” says Curt Frank, a chemical engineer at Stanford University. “These pearls are connected by carbon-carbon bonds, and those carbon bonds are very strong.”

The links in biodegradable plastics are weaker, often involving chemical groups called esters, for example. Water, acids and enzymes — including those produced by certain microbes — can break those ester links, eventually leaving compounds such as carbon dioxide and water, which can be consumed by nature, and methane, which can be captured as fuel or fed to microbes.

Claims that some plastics are ‘biodegradable’ or ‘compostable’, when they actually persist in the environment for a very long time, have led to a push for stricter definitions. A plastic is biodegradable only if it breaks down into fragments that can be completely consumed by microorganisms in the disposal environment within a defined time period. The American Society of the International Association for Testing and Material has set standards for claims of ‘compostable’ that include, for example, that 90 percent of the organic carbon must be used by compost microorganisms in no more than 180 days.

But biodegradability in itself isn’t necessarily meaningful, Narayan says. (“Human faeces is biodegradable,” he says. “That doesn’t allow you to throw it anywhere.”) Different materials biodegrade under different conditions, and if those conditions aren’t available, then the material can be just as bad as regular plastic. For example, those increasingly familiar corn-based cups — made from polylactic acid, or PLA — are labeled as biodegradable, which is technically true. But PLA breaks down only in industrial composting centers. So without the infrastructure to collect and compost, biodegradability alone may not be as beneficial as it seems.

READ:  Why Sizzler failed in Australia

Nor can one replace all plastics with biodegradable ones. For some applications, such as PVC pipes or bulletproof vests, the last thing you want is for the material to break down.

The key is to develop the right material for the right application, and that adds yet other challenges. For example, the temperature needed to mold, shape and process biodegradable plastics is often near the temperature under which it degrades.

“The chemical linkages that make them biodegradable also makes them hard to process,” Frank says. “That’s the conundrum.”

To raise the degradation temperature, for instance, researchers can add chemicals that prevent or impede the polymer chain from breaking down. Or they can use tactics to lower the melting temperature, for example by using additives called plasticizers.

While it’ll take time to develop the right processing techniques for every application, researchers are working at it. Frank, along with Sarah Billington, a civil engineer at Stanford, is developing a biodegradable version of Styrofoam for use as building insulation. Researchers at the University of Georgia are using polyhydroxyalkanoates, or PHA — which are compostable under broader conditions than PLA — to make plastic straws that can degrade even in the oceans. Companies such as PepsiCo and Nestlé have announced plans to use PHA for packaging and bottled water, and a new California startup called Cove aims to sell water in PHA bottles that it says degrade in oceans and landfills.

Yet other researchers and companies are finding better ways to produce the plastic. Most of the ostensibly biodegradable plastics on the market today — typically PLA — are made from food crops such as corn, potato and sugarcane. Microbes munch on sugars derived from these crops and produce lactic acid, the building block of PLA.

This is potentially a great approach, Narayan says, provided that the underlying agricultural practices are sustainable. The infrastructure already exists, rural agrarian economies could benefit and, according to his calculations, just 1 percent of the globe’s total arable land could grow enough crops to meet the world’s plastic production as it was in 2016.

Still, critics are concerned about competition with food supplies: Ethanol fuel produced from corn already has been blamed for driving up food prices. To avoid potential problems, Weiss has developed a technique to make plastic from just sunlight and two microbes. Microbe No. 1 is a cyanobacterium that converts sunlight into the sugar sucrose via photosynthesis. (By growing the microbe inside a gel called alginate, Weiss restricts the cyanobacterium from reproducing, thus forcing it to put all its energy into sucrose production.) The sugar is then fed to microbe No. 2, a bacterium that converts sucrose (as a way to store extra energy for itself) into a type of PHA called PHB.

But what might be even better is to harness waste products. Kartik Chandran, an environmental engineer at Columbia University, is turning ground-up food waste and sewage sludge from wastewater treatment plants into fuels and useful products, including plastics. He has built bioreactors that use a mix of microbes to first break down the waste into volatile fatty acids. Then, in a second step, another mix of bacteria stitches those acids together to produce PHA.

“To me, these are not waste streams,” Chandran says of the sludge and trash. “These are enriched streams — these are partially refined streams. There’s no sense in dumping them out or even putting more resources into cleaning them.”

Startups such as Genecis in Canada and Full Cycle in California are also making PHA from organic waste. And Mango Materials in California — whose advisory board includes Frank — is using microbes to produce PHB from methane captured from facilities such as wastewater treatment plants and landfills.

These plastics can then be composted, part of a closed-loop production cycle in which nothing is wasted. Chandran envisions a future with facilities in every community that collect and process waste, turning it into not just plastic, but fuel and other materials. “It could potentially touch everything we do and the way we live,” he says. “This is all-encompassing.”

Marcus Woo is a freelance science journalist based in the San Francisco Bay Area. Follow him @sucramoow.