RICHMOND, Va. ― Thousands of pro-gun protesters, along with extremist factions from all over the country, crowded in and around Capitol Square on Monday for a pro-gun rally that for weeks has stoked fears of violence that reached the highest levels of … 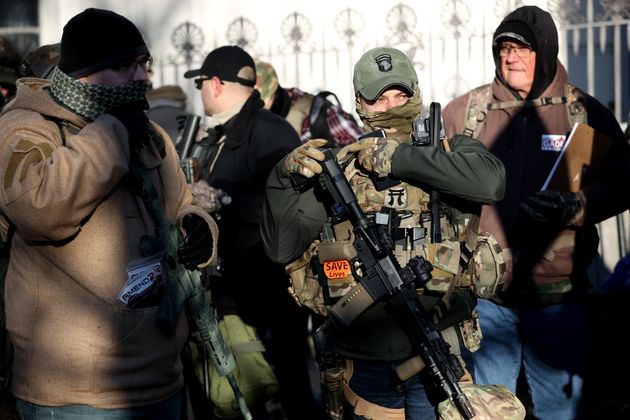 RICHMOND, Va. ― Thousands of pro-gun protesters, along with extremist factions from all over the country, crowded in and around Capitol Square on Monday for a pro-gun rally that for weeks has stoked fears of violence that reached the highest levels of Virginia government.

Three neo-Nazis associated with a violent white supremacist group called The Base were arrested last week after allegedly discussing plans to travel to the rally and open fire from different positions in order to cause chaos. Gov. Ralph Northam (D) declared a temporary emergency, banning all guns from Capitol Square for the event and saying there was “credible intelligence” that there may be violence.

Protesters of various gun control proposals in Virginia, some of whom were armed, gathered around the square as early as 5 a.m. Monday. Police enforced the no-gun policy on the Capitol grounds by erecting a security checkpoint so protesters would enter and leave through one space. But that didn’t stop other armed people from lining up in formation outside, and roaming downtown Richmond with guns on full display.

“This is peaceful civil disobedience,” said one armed protester named Michael, who declined to give his last name. “We’re not here for a fight, but we’re ready if need be.”

I’m in Richmond for today’s gun rally. Will be updating throughout the day. Stay safe everybody. pic.twitter.com/SzmhraTW8E

Thousands at Capitol, lines still long to get in pic.twitter.com/OItFyWfoR8

Just before noon, a man was detained reportedly attempting to gain access to the rooftops of a building near the Capitol, according to the Richmond Times-Dispatch. The paper reported that the man didn’t have any guns visible at the time, but that he was “dressed up to be there,” according to a security guard for the building. The man was charged with trespassing.

Reporters said there were few police in plain sight ― a stark contrast to militarized police presence often seen at other rallies and demonstrations, including those on college campuses.

What is so striking about the scene at the gun rights rally in Richmond is what you don’t see: almost no cops. Just that little cluster of state police there. No lines of riot cops. No law enforcement in riot gear. pic.twitter.com/W0jkwYmmkP

With the exception of major police presence, the Richmond rally had many of the same elements as the deadly Unite the Right rally in Charlottesville in August 2017.

Extremist groups with varying messages and intentions had planned for weeks to attend. Far-right militants, conspiracy theorists and other extremists, including members of the Proud Boys, Oath Keepers and American Guard, began gathering in Richmond on Sunday night.

Reporters on location Monday morning began seeing symbols, flags and patches connected to various extremist and militia groups. One member of the Proud Boys was seen wearing a patch reading “RWDS” — shorthand for “Right-Wing Death Squad” that is often used in reference to a fascist Chilean dictator who murdered, tortured or detained some 40,000 of his own people.

And here I see my first RWDS (Right Wing Death Squad) patch of the day. pic.twitter.com/dv59VCdtUz

Anti-gun control group Virginia Citizens Defense League organized the rally and helped bus in people from throughout Virginia and other states.

The protests initially were touted as being in response to a number of new gun control bills that have been introduced by Democratic lawmakers, including one that would require universal background checks and another that would limit handgun purchases to one per month. The VCDL has also pushed back against a “red flag” bill that would allow authorities to temporarily confiscate guns from someone deemed to be a danger to themselves or others.

The VCDL has falsely accused Democrats of inviting violent groups to the rally in order to sow discord.

“[Democrats] would love for it to degenerate to ‘violence, rioting, and insurrection’ in order to smear gun owners,” the group said in a statement last week. “Has the Democrat leadership actually invited violent groups to attend for the purpose of disrupting our peaceful assembly?”

Just hours later, three of the suspected neo-Nazis accused of making plans to travel to the rally were apprehended. The next day, three more suspected members of The Base were also arrested. And just one day after that, a seventh alleged neo-Nazi associated with the group was arrested in Wisconsin.

“The Democrat Party in the Great Commonwealth of Virginia are working hard to take away your 2nd Amendment rights,” he wrote.

The Democrat Party in the Great Commonwealth of Virginia are working hard to take away your 2nd Amendment rights. This is just the beginning. Don’t let it happen, VOTE REPUBLICAN in 2020!

The president also tweeted about the rally last week, warning people that voting for Democrats would result in their guns being taken away.

Earlier this month, more than 400 people showed up to a meeting in Buckingham County to voice fears that the government would take away their guns following the introduction of a bill to ban assault rifles. That bill was struck down by the state Senate Judiciary Committee last week.

Counties throughout the U.S., including in Virginia, are declaring themselves “Second Amendment sanctuaries,” a cynical play on the term used to describe cities that vow to protect undocumented immigrants by refusing to cooperate with Immigration and Customs Enforcement. The new gun “sanctuaries” are in response to a cultish, paranoid belief that the government is actively attempting to disarm law-abiding citizens. But the declaration amounts to little more than a symbolic stance. Gun laws are still enforced.

By early afternoon, militia groups that had donned full camouflage and assault rifles began to disperse. The president tweeted he would “NEVER allow our great Second Amendment to go unprotected, not even a little bit!”

But the day of uninterrupted outrage from those carrying military-style murder weapons only highlights that there is no government boogeyman trying to forcefully take Americans’ guns, no matter how much they might try to pretend otherwise.

Andy Campbell contributed to this report.