Thousands of residents in Goma, a major city in the eastern Democratic Republic of Congo, spent the night outdoors following the eruption.

Around 8000 people crossed into Rwanda from the Democratic Republic of Congo (DRC) to seek refuge following the eruption of the Mount Nyiragongo volcano, Rwanda's Emergency Management Ministry has said.

Thousands of residents in Goma, a major city in the eastern Democratic Republic of Congo, spent the night outdoors following eruption on Saturday, according to a spokesperson for the Norwegian Refugee Council (NRC).

"This morning, after lava flows from Nyiragongo volcano have stopped, most of Congolese evacuated to Rubavu are returning back home. Rwanda received around 8000 people last night," the ministry said on its official Twitter account. 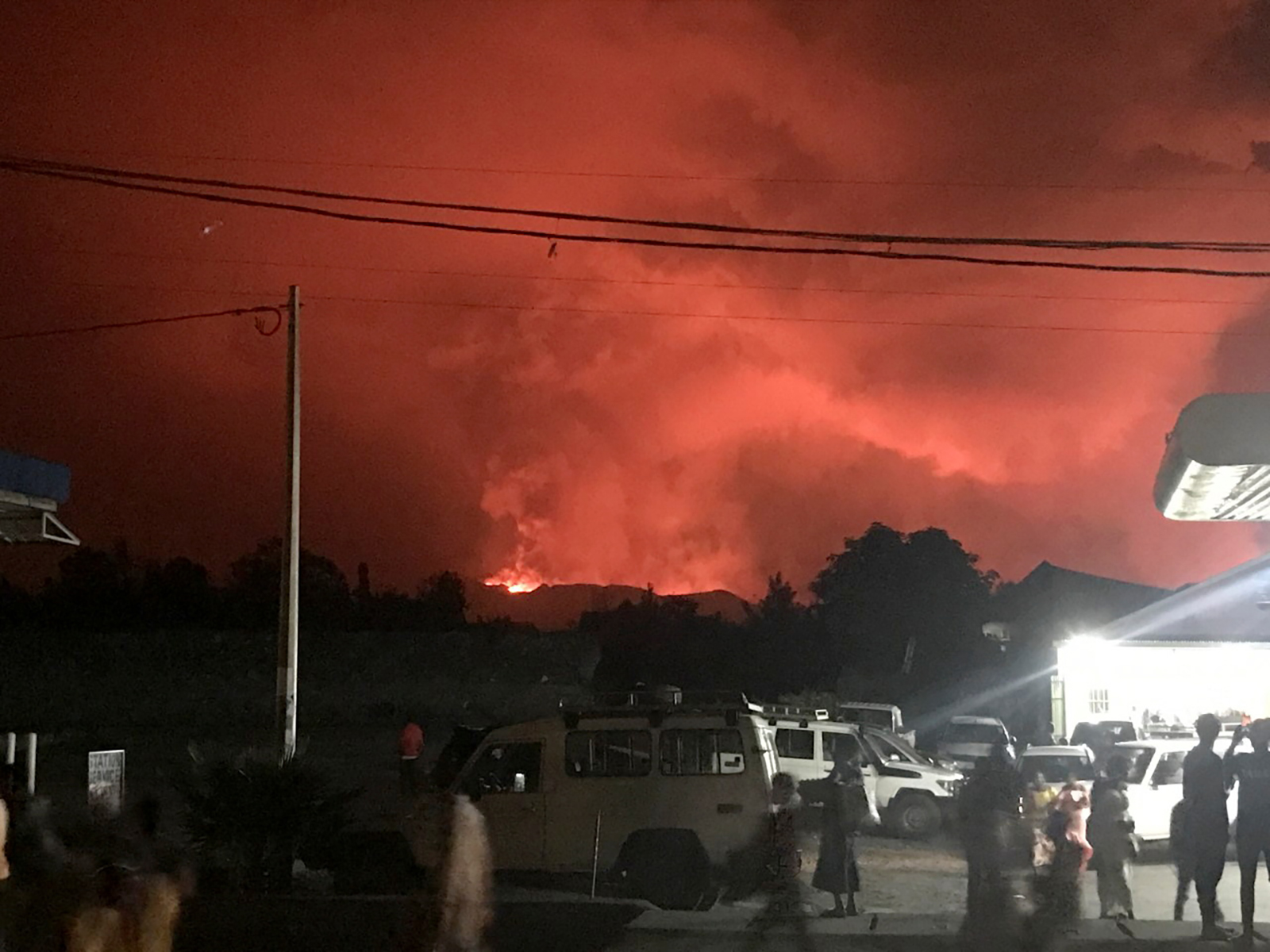 READ MORE: Volcano eruption appears to subside in the Democratic Republic of Congo

"There has not been a massive panic movement, but people are really worried," said Tom Peyre-Costa, the council's spokesperson for west and central Africa.

Evacuees first walked toward Rwanda, Mr Peyre-Costa told CNN. The border was closed, so they went back to Goma and headed to an area north of the city. Mr Peyre-Costa posted to Twitter video of people leaving the city.

"Everywhere in the city you see people walking with their belongings, their children and even their goats and whatever they could grab. Most of them are just sitting by the road waiting to be able to go back any time soon," Mr Peyre-Costa said.

All together, 11 people died in the aftermath of the eruption, officials said.

Five people died in a car accident when they tried to evacuate, Mr Peyre-Costa told CNN.

Four prisoners also died while trying to escape from Camp Munzenze prison following the eruption, government spokesperson Patrick Muyaya told CNN. He said the prisoners were "trying to escape and could have clashed with guards."

READ:  What the 'Golden Age of Air Travel' was really like

Mr Muyaya said another two people died yesterday, but did not elaborate on the circumstances.

Six hundred homes around Goma have been destroyed and five schools flattened, according to NRC estimates. The volcanic eruption seems to have subsided, according to the Goma Volcano Observatory, which monitors the volcano. Authorities in the city activated an evacuation plan as a precaution.

"We arrived quickly, we didn't expect these kinds of things which just happened to us," Theophile Tulinabo, a resident who fled his home after the eruption, told CNN in Buhene, a neighbourhood north of Goma. "And where are we going to live now? At the moment, we don't know."

Furaha Grace, another resident speaking to CNN in Buhene, said she was in the local market when she had to run from the eruption.

"When we returned to the city the houses were burnt and some people were left destitute. I got into an accident and got hurt," she said. "So we're appealing for assistance and especially for food."

Goma is on the edge of Lake Kivu on the Democratic Republic of Congo's border with Rwanda. The current metro area population of Goma in 2021 is 670,000, according to a projection by the UN, World Bank and others.

Mr Peyre-Costa said a number of non-government organisations in the region believe Goma's population is closer to one million.

Patrick Kakesa of the International NGO Safety Organisation (INSO) said in a statement at 11pm that the lava appears to be flowing towards the border with Rwanda.

"In the event of an evacuation, customs between Goma and Gisenyi are closed overnight," he said.

INSO advised humanitarian workers living in the Munigi camp a short distance from northern Goma to move to villages further to the west.

Mr Peyre-Costa and 11 of his colleague evacuated as a precaution.

"If the situation stays the same we may be able to return tonight, so we'll see. We are on standby. We don't know what's going to happen," he said.

Volcanologist Honore Chiraba of the Goma Volcano Observatory told CNN there are two fractures in the volcano. Mr Chiraba is following the volcanic activity closely with the governor of North Kivu, the province where the city of Goma is located.

"The lava is flowing but not very fast," Mr Chiraba said. "At this stage we don't think anyone is injured but we can't know for sure."

A post on the verified Twitter account of the British Embassy in the Democratic Republic of Congo said Saturday, "Nyiragongo volcano, close to city of Goma, began erupting this evening. Current assessments indicate eruption doesn't threaten the city itself. All should remain vigilant & Brits concerned should reach out to us ... We continue to monitor the situation closely."

The 3500 metre-high volcano is one of several near the DRC's border with Rwanda and Uganda, an area of tropical rain forest and rare mountain gorillas.